Larusmiani, sponsor with Pirelli of the Concorso di Eleganza Villa d'Este, lined up some of the rarest and more exclusive Continentals of all time

Britain is the land of powerful and austere cars which can be opulent and luxurious at the same time. Bentley perfectly embodies this concept and the Continental of the 1990s is one of its most striking examples. Only Bentley could pull off an over 5-metre-long coupé weighing in at almost 2.5 tonnes with the trim of a premium lounge and a V8 6.75-litre turbocharged engine.

The Fuoriconcorso event organised during Concorso di Eleganza at Villa d'Este was the ultimate opportunity for all enthusiasts of this unusual and attractive idea of car to see an important selection of them up close. The exhibition was organised by Larusmiani (sponsor together with Pirelli of the most famous concours d'elegance in the world) against the backdrop of Villa del Grumello overlooking Lake Como. Guglielmo Miani, fashion entrepreneur and owner of the oldest tailor's shop in Via Montenapoleone, Milan picked a selection Continentals which would be otherwise impossible to admire, including several one-offs, special series and custom cars. 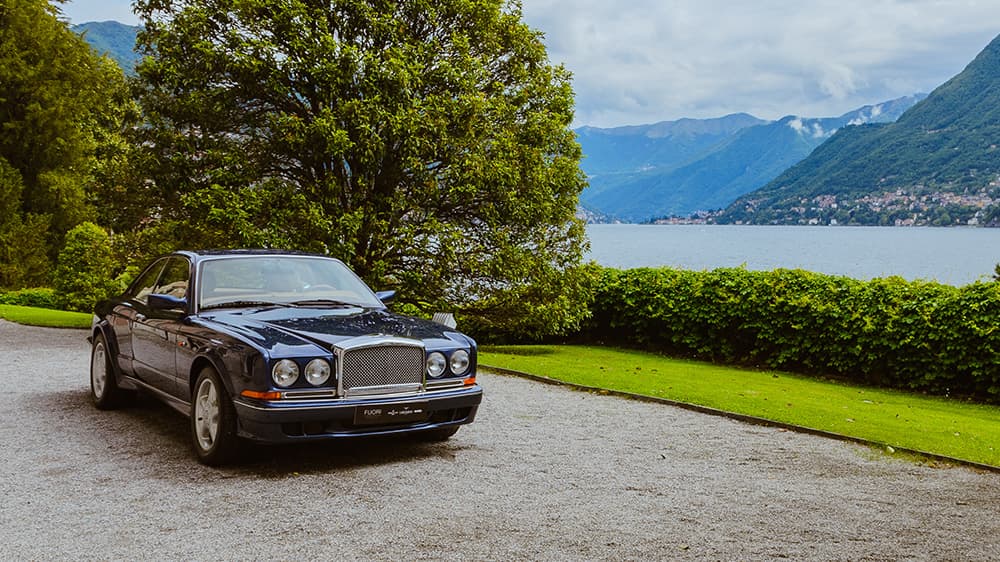 THE CONTINENTAL T
The Continental T Mulliner Special Commission is a one-off made to be displayed at the Geneva Motor Show in 2000 and then in Paris. Super-equipped, its goal was to showcase the ability of the craftsmen from Crewe to customise and make each car unique. Mulliner is the division of Bentley that brings the requests of customers into fruition.

This particular Continental has a curious history. It was kept by the manufacturer for some time before being purchased by a British farmer who had won the lottery and lovingly preserved it for several years. The V8 turbo under the bonnet can still deliver all its 420 hp propelling this two-door bison from 0 to 100 km/h in 5.7 seconds.

The car was on show with another Continental T Special Commission, this one not created by Mulliner, and another one-off, also created to be displayed in a motor show. Orange Flame was the colour chosen for paintwork. Curiously, it drove 9950 miles in its first three months of life and then just a little more than one thousand in the following 20 years. It has just 10,790 miles on the clock today.

The other one-off Continental T Mulliner Special Commission was ordered by a New York customer who wanted Cobalt Blue exteriors and two-tone leather interiors. A particularity of this car is that the rear seats were transformed into an extra luggage compartment making it one of the very few two-seaters Bentley ever made.

THE BENTLEY AZURE
Remove the roof and the Continental turned into the Azure. Very few were made and even fewer were the Le Mans versions like the one on show in Larusmiani's Fuoriconcorso line-up. The 1087 standard Azure cars were joined by 65 Final Series, 155 Mulliner Edition and only 4 Le Mans. The Azure was created to offer high performance in a touring, not racing perspective. This is apparent from its weight that, consequent to the reinforcements which replaced the roof, reached a record-breaking dry weight of 2,470 kg. Also in its appearance, it was more elegant than the coupé but less gritty. The Azure was ready to sail gently down the bendy B-roads of Britain and along coastal roads with the wind in your hair.

THE CONTINENTAL SEDANCA COUPE' MULLINER
The Continental Sedanca Coupé Mulliner in the Fuoriconcorso review is in a class of its own. Only six rolled out of the Bentley factory sporting a Targa bodywork, that is a coupé with a removable roof portion, while the rear uprights and the rear window remained fixed. Mid-way between the Continental T and the Azure, the Continental SC on show was one of the six made and personalised by Mulliner. It was purchased and configured in Monte Carlo for an oligarch who kept it until 2018.

THE CONTINENTAL R AND CARLO TALAMO's GIALLOQUARANTA
The other Le Mans version but this time based on the Continental R was on show in Villa del Grumello. This one sported the classic Verdant dark green exteriors ordered by the Luxembourg-based customer who owned it. The car then landed in Italy and is currently owned by a Swiss collector.

Another Continental R had remarkably flashy vermilion red bodywork with magnolia interiors that contrasted with the sober, traditionally British style of the car. Today, this bold coupé belongs to an Italian collector.

The "Sufacon", abbreviation of Super Fast Continental, was built by Mulliner at the behest of the Sultan of Brunei. To make it faster than usual, the power of its V8 engine was upped to 527 hp securing acceleration from 0 to 100 in 5 seconds net.

The Continental R Mulliner Special Commission with the sportiest look ever, instead, is tied to the name of legendary Carlo Talamo. It is probably also the showiest Bentley of them all with its Milan green paintwork, bare aluminium bonnet, yellow cooling fans hiding the plain sight behind the grille and two of the four headlights replaced by grids. This racing Bentley keeps the spirit of Carlo Talamo alive.

Villa d’Este: the technology of the most fascinating cars on display