It is at The Green Hell – Nürburgring-Nordschleife - where car manufacturers show their muscle and burn rubber in an effort to beat the clock. But when it comes to breaking records it's always them, the P Zero tyres: eight records in eight years

Home road The fastest
in hell

Even before its presentation it was already the fastest: the new Lamborghini Aventador SVJ has conquered the Nürburgring- Nordschleifewith a time of 6:44.97 minutes across the 20.6 kilometres of that mythical track. Driving enthusiasts flock to the circuit in the heart of Germany to put themselves to the test on what is considered the hardest, most challenging and selective circuit in the world. "If you're good here, you're good anywhere," they say. With dozens of corners to learn by heart, uneven terrain and compressions, changes in the track surface and guard rails which run along the track to remind you that making a mistake is not an option, the Nürburgring-Nordschleife is a legend of motor racing. Which is why for a good couple of decades this 20.6 kilometres of tarmac has been the place car manufacturers use to pit themselves against each other, setting new records and smashing those of the past. At Nürburgring, only one name reigns uncontested: P Zero.From 2010 to the present day, eight records for Pirelli in eight years. 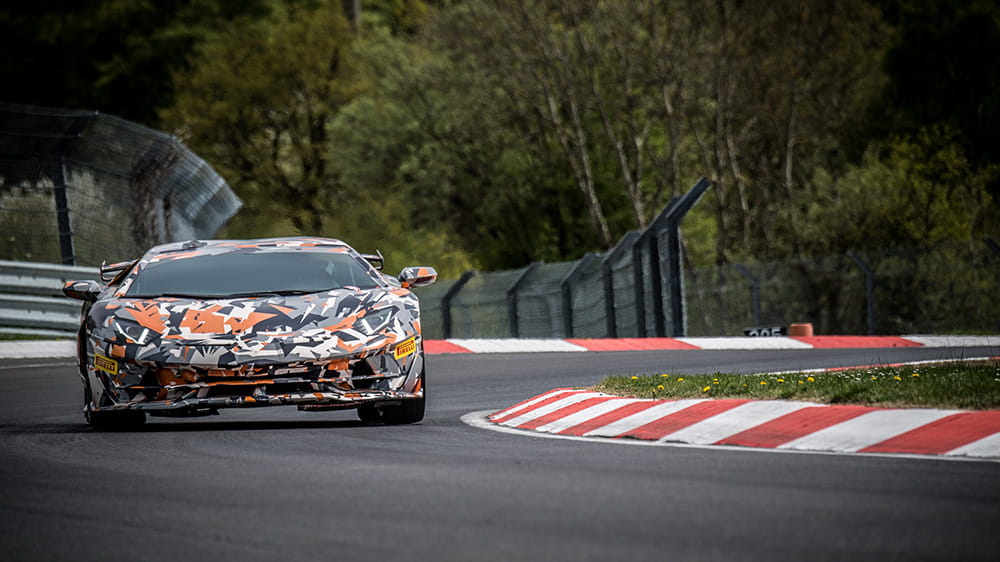 The cars do the brunt of the work, putting the mechanical engineering under scrutiny and the drivers to the test. No question. Yet the tyres - whether staying glued to the Flugplatz or supporting the compressions at the Karusell - are the decisive factor in the race against the clock. As they used to say: "Power is nothing without control". And, working in close cooperation with the engineers of the car manufacturers, that control is hard won by the Pirelli technicians on every single millimetre of the tyre tread and every aspect of its structure. This is how new Pirelli P Zeros are created every time, recognisable from the logo on the side, such as the "L" in the case of Lamborghini.

Branding which you can also find on the tyres of the new version of the Lamborghini V12, which will be delivered to clients fitted with P Zero Corsa production tyres, while the P Zero Trofeo R tyres used to break the record will be available as an optional extra. New versions of both sets of tyres were developed especially for the Aventador SVJ thanks to the great teamwork between the Lamborghini and Pirelli technicians, who were able to adapt the characteristics of the tyres to the car in order to maximise performance. One point of reference in the path of development was the lap time round the Nardò test circuit, where the Aventador SVJ gained two seconds per lap with its new P Zero Corsa tyres. With this new Lamborghini, the challenge for the Bicocca engineers was to support the method of integral traction with four wheel drive: the tyres are needed to ensure a consistent rolling radius in order to maintain optimal torque distribution and avoid placing strain on the Haldex friction brakes.

And there we have it: thanks to the Lamborghini Aventador SVJ, Pirelli has set another new record. Though it's already working on the next one.