P Zero, quality and innovation
in the service of the world’s most prestigious cars

Home road P Zero, quality and innovation
in the service of the world’s most prestigious cars

P Zero, quality and innovation
in the service of the world’s most prestigious cars
Subscribe to Pirelli on Youtube

P Zero have been the tyres of choice of great sports cars since 1987. Many legendary celebrity cars, on and off the silver screen, employ P Zero: James Bond’s Aston Martins, Uma Thurman’s yellow Lamborghini Gallardo in the short film Mission Zero, Jamiroquai frontman Jay Kay’s green Ferrari and Kanye West’s Lamborghini. But these superstars are only a few among the many satisfied drivers who’ve chosen to embarked on a wild ride with Pirelli and P Zero. Supercars and P Zero tyres have been making history together for the last thirty years, and it doesn’t look like they’re going to stop any time soon.

The history of P Zero is interwoven with the evolution of Pirelli itself – a company that has succeeded in becoming the world’s leading developer of high-performance tyres, thanks to its constant dedication to innovation, research and all-round feedback analysis from circuit competition, desert racing and city driving. Pirelli puts meticulous care into tailoring each of its products to its specific use: thanks to its Interactive Development Process, borrowed from Motorsport, Pirelli can structure a tyre to fit any custom requirements, so that any client can be directly involved in designing their very own P Zero. Pirelli’s willingness to embrace its clients’ needs has sparked many positive collaborations over the years, leading to the production of custom tyres for prestigious cars such as the Lamborghini Centenario, LaFerrari (Ferrari’s latest hypercar, of which only 499 examples have been built), McLaren P1 and Pagani Huayra, which employs three different types of P Zero, Traditional, Corsa and Trofeo. Pirelli’s excellent design relies on hands-on, artisanal intervention, during the prototype-production phase. The Milanese brand believes that the latest mechanical innovation should go hand in hand with human technology: this is summed up in the figure of the ‘sgorbiatore’, the professional in charge of carving the thread pattern into each prototype tyre – by hand, though aided by the most sophisticated precision tools. It is a job that takes incredible patience and accuracy: the skills and the talent of a real artist. 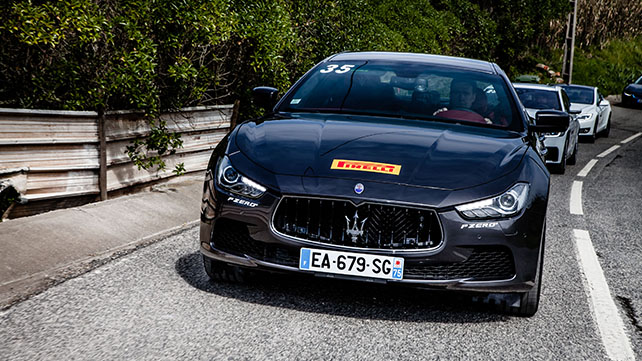 P Zero tyres have been evolving to match the performance of the cars they are paired with: from Ferrari F40 to Lamborghini Countach in 1988 and Alfa Romeo Sprint in 1989. Maserati and Pagani soon joined the Pirelli ranks. The first legendary P Zero model has been integrated with new features as the range expanded to include the new System, Corsa and Corsa System, developed in 2010, in collaboration with Lamborghini, for its Gallardo LP 570-4. There have been different variants too: Rosso, Nero, Silver, and finally then new P Zero, released in 2007, which guarantee both high-performance and comfort while driving, thanks to their upgraded tread compound. A grand total of 250 new releases over the last nine years, for a number of very prestigious partnerships, most recently with Porsche 911, Lamborghini Aventador and McLaren MP4-12C. The best of the premium and prestige category has been choosing P Zero since Ferrari F40.

The P Zero brand also acts as a reference point for all dry-weather, slick-tread tyres produced by Pirelli for Formula 1® (of which it has been the unique tyre supplier since the 2011 World Championship). The new regulations for this year’s World Championship, which began on Sunday, March 20th 2016, in Melbourne, allow up to five slick-tread compounds, which can be identified by their different colour marks. The most exciting addition is the Ultrasoft, marked in purple – even softer than the red-marked Super Soft. Then there are the yellow Soft, the white Medium, and the orange Hard – harder and ideal for tougher circuits that put a strain on the rubbers.

The new P Zero is unveiled in Estoril

Stop that tyre, if you can