The sight of one thousand supercars in a single location is one nearly too impressive to imagine. In the United Kingdom on the 3rd of September 2017, this near-fantastical vision was brought to life at Blenheim Palace Classic & Supercar!

Supercar spotters on the streets of London are certainly not unfamiliar with the sight of one, two or perhaps even half a dozen supercars. But even Oxford Street and Kensington couldn’t hope to hold a match to the automotive armada which poured through the gates of Blenheim Palace in early September. 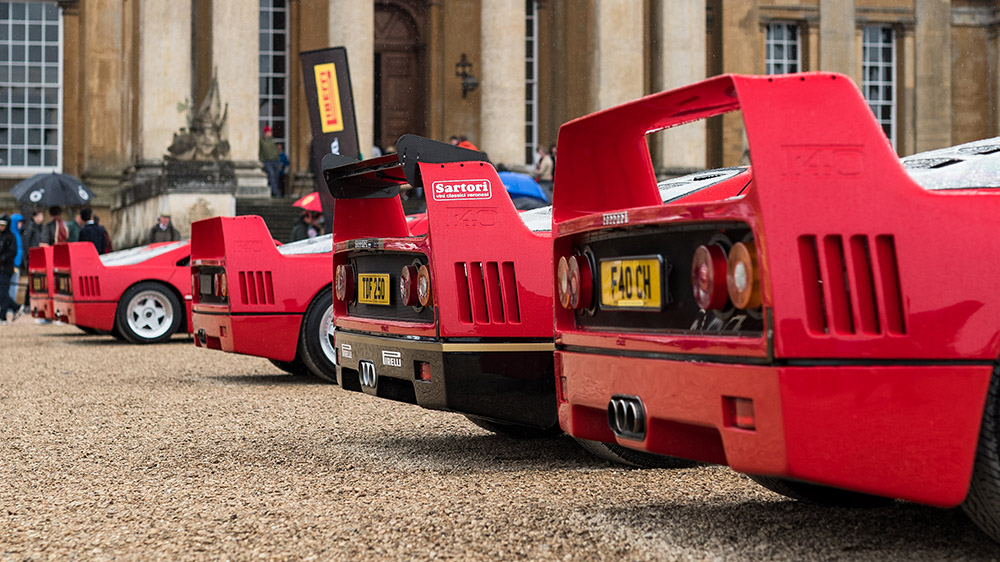 Best of British, from Blenheim to Monza
​At the heart of the event were eighty hand-selected super and hypercars in our Prestige & Performance Competition held in the Great Court. Each year the competition features an all-new cast of incredible supercars organised into eight categories, which means no two years are ever the same. This year’s classes included promising titles such as Pin Ups from the New Millennium, Best of British and Ferrari F40 @ 30, which celebrated three decades of the iconic supercar and the genesis of our P Zero tyre.

And surrounding the Great Court? Over nine hundred more supercars. The third year of our annual residence at Blenheim Palace coincided with anniversary celebrations for Ferrari. Seventy years, to be precise. The result was a stunning homage to the Prancing Horse arrayed before a suitably epic backdrop of the Great Lake and the Column of Victory.

The day came and so did a familiar British meteorological phenomenon as our supercar parade was quite literally rained on. But, of course, that’s not to say that the weather rained on our parade in any metaphorical sense. Puddles may have begun to form, but much bigger crowds coalesced in response.

While it’s true that the British complain about the weather, at Blenheim Palace and in the face of a truly singular monument to supercar style and performance, a few drops of rain would not defeat those in attendance.

At no other moment was this die-hard fandom put to the test than during the Italian Grand Prix. A giant screen was erected as an elegant solution to the good-to-have problem of Pirelli being at events all over the world. F1 fans stood amongst some incredible road-going automotive achievements whilst watching Lewis Hamilton bring home the win on the track at Monza.

A Modern Concours
The inaugural year of Blenheim Palace Classic & Supercar promised to further advance what previous Prestige & Performance Competitions in the Great Court had delivered - a truly modern concours.

A traditional concours exhibits classic, vintage and prestige automobiles organised into categories, within which discerning judges award prizes to the winners based on a diverse range of criteria. These, for certain classes and concours, often relate to restoration and how close the model is to its original condition.

A modern concours, featuring both rare classics and cutting-edge hypercars, therefore must forge a unique, yet quintessentially similar, path. The Pirelli Prestige & Performance Competition offers this twist on a traditional concours by celebrating supercars built from 1976 to the very latest modern hypercars.

In this way, the attention to detail which judges celebrate in classic car restorations can also be appreciated in a factory-fresh model. Ordering a Lamborghini, Ferrari or McLaren is not as simple as picking a model, paying your money and waiting for delivery. The process has exploded into granular detail, between interiors, performance options and a myriad of aesthetic choices which make each supercar a truly personalised automotive expression of an owner’s vision.

In short, no one only orders a high-performance sports car anymore, they build one from the ground up.

As the day progressed, the judges tallied scores and engaged in fierce deliberation until selecting a single ‘Best in Show’ award winner from the highest scoring car in each of our eight categories. The crowds gathered, and umbrellas were deployed, as Nicki Shields and Andrew Bagley took to microphones for the full eighty-car Prestige & Performance parade.

As the one-off spectacle passed, Nicki and Andrew introduced each entrant to the crowd before handing trophies to the winning owners whilst they stayed dry and warm within their supercars. This sight signified what simply must be the most prestigious ‘drive-through’ ever experienced.

The ‘Best in Show’ winner passed through the gates of the Great Court, waiting photographers, fans and presenters greeting him immediately, yet unaware of his victory. So unexpectant, in fact, he drove by where each car was required to stop for a picture. As he was chased down and invited back, the winner’s incredibly rare Lamborghini Countach LP400s reversed its way to victory, a trophy and a commemorative Pirelli F1 tyre!