Summer vacation
on a bike

A tour of natural and historical beauty spots, to get away from city life. Ten cycling routes In Italy and Europe

Summer vacation
on a bike

Summer is time for holidays and leisure. Time for cycling! Keep an eye on the temperature and cycle on cooler days when there is a bit of a breeze and low humidity, getting into the saddle to discover some of the wonders Italy has to offer on the country’s many cycling routes. We have ten routes to recommend to you. 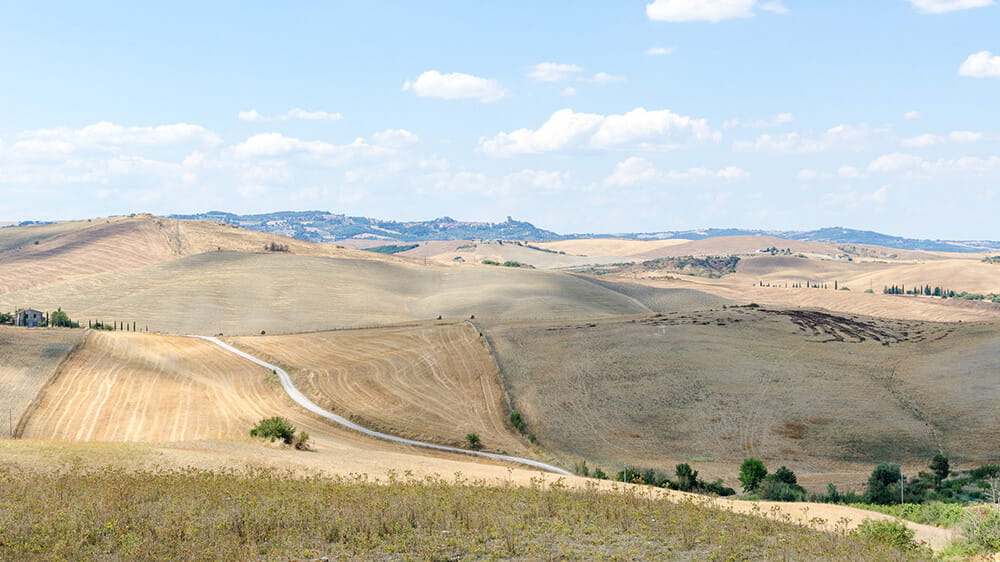 Ciclopista del Sole cycling route
From the Brennero Pass in the Alps to Sicily, through Trentino, past Lake Garda, and through Modena to the Tyrrhenian Coast and down to Rome, Naples and Sicily. A total of 2350 kilometres, though the best cycle paths are in the Peschiera-Mantua section and the Sentiero della Bonifica between Chiusi and Arezzo. The rest of the route travels along abandoned railway lines and roads with very little traffic.

Ciclovia Po cycling route
1641 kilometres through Piedmont, Lombardy, Emilia-Romagna and Veneto, following the bed of Italy’s largest river. Ciclovia del Po is part of EuroVelo 8, the Mediterranean Route, which starts in Cadice, Spain and goes all the way to Limassol, Cyprus. This cycling route joins a number of bicycle paths in different regions to maintain continuity all along the Po River. The route is highly varied in terms of both the road bed and safety conditions, alternating riverbank paths with roads and proper cycling tracks. It’s best to switch from one side of the river to the other as necessary to ensure safety and enjoy the green landscape of poplars and oaks, as well as the rice paddies.

Ciclovia Francigena cycling route
From Lombardy to Puglia, via Emilia-Romagna, Liguria, Tuscany, Lazio, Campania and Basilicata. The Italian section of EuroVelo 5 starts in Como to provide a connection with the rest of the continent. From Como it goes to Milan to join the Naviglio Pavese canal, coming to Pavia to join the traditional route of the Via Francigena, the route travelled in 990 by Sigeric, the Archbishop of Canterbury, who kept a diary of his pilgrimage from Canterbury from Rome. From the capital city the route heads southeast along the Via Prenestina corridor, through Benevento, Matera and Taranto. The route ends between the two Roman columns in Brindisi.

Ciclovia Romea cycling route
Another route combining beautiful landscapes with historic sites is the Ciclovia Romea, an 800 kilometre cycling route through the regions of Veneto, Friuli Venezia-Giulia, Emilia-Romagna, Tuscany, Umbria and Lazio. The route is partly based on the Roman Via Annia Popilia and partly on the Tiber-Adriatic multimodal corridor. Tourists from northern Europe enter Italy at Tarvisio Pass, travelling the Ciclabile Alpe Adria cycling route to Udine, then abandoning this route there to head west, taking a series of other cycling routes to Ravenna and then heading through Tuscany and Umbria to Lazio.

Ciclovia Adriatica cycling route
Travelling all along the Adriatic coast by bicycle, from Trieste to Santa Maria di Leuca, where the Adriatic meets the Ionian Sea. More than 1700 kilometres through seven regions (Friuli Venezia-Giulia, Veneto, Emilia-Romagna, Marche, Abruzzo, Molise and Puglia), passing through the Po Delta and past plenty of beaches! Without neglecting the beauty of cities like Venice and Lecce. The Ciclovia Adriatica route offers an extraordinary opportunity to combine beaches with the great architecture and culture of Italian cities.

Ciclovia Salaria cycling route
Rome, the small towns of Lazio and the Marche, San Benedetto del Tronto. The Roman Via del Sale comes back to life in this fantastic cycling route 381 kilometres long, joining the Tyrrhenian and Adriatic Seas and passing through two regions over a route that has not yet been marked but makes use of roads with low and very low traffic levels to offer cyclists access to a series of little-known architectural and monumental wonders, going back 3 thousand years in history.

Ciclovia dei Borboni cycling route
Heading in the opposite direction, a few kilometres farther south, the Ciclovia dei Borboni connects Bari with Naples, embracing the history and culture of southern Italy. 452 kilometres have already been marked. The part in Puglia makes use of secondary roads with very little traffic, and the parts in Basilicata and Irpinia travel over provincial roads which do not however have much vehicle traffic, but between Nola and Naples the route takes national highway 7b, the ancient Via Regia of Puglia, which has a couple of long stretches with cycle paths.

Ciclovia dei Tre Mari cycling route
The Adriatic, the Ionian and the Tyrrhenian: three seas in the Mediterranean, joined by a single cycling path which starts in Otranto and travels across the plains of Puglia and Basilicata to Sapri. From beautiful Otranto, Italy’s easternmost point, the route heads west to Gallipoli, along the Ionian Sea to Taranto. From there cyclists should take the train to Metaponto or Policoro and starting pedalling again from there, to avoid the high-traffic highways 7 and 106. The alternative is to travel through the interior across Massafra Palagiano.

Ciclovia Svizzera-Mare cycling route from Switzerland to the Sea
From Locarno to Ventimiglia, crossing the region of Piedmont on a 483 kilometre route that passes Lake Maggiore and Lake Orta as well as the towns of Novara, Vercelli, Alessandria and Asti before coming to the luxuriant landscapes and historic towns of Liguria. The cycling route from Switzerland to the Sea connects the central European EuroVelo 7 itinerary with the Eurovelo 8 itinerary through Swiss national route 3 in Canton Ticino to come to the Azure Coast and Provence.

Ciclovia Assisi-Spoleto-Norcia cycling route
Winner of the 2015 Green Award, the Assisi-Spoleto-Norcia cycling route will be 103 kilometres long when the reclamation of the former railway line is completed, but already represents one of Italy’s most important cycling infrastructures. Primarily on a separate cycle path, the route also makes use of low and very low traffic roads to cross Umbria and is almost entirely flat (with the exception of a brief section, only 5 kilometres long, up to the centre of the town of Assisi).

Taking you
to new places