Think of cucumber sandwiches, croquet and boater hats. It’s the automotive equivalent of Glyndebourne or Henley and in fact, just like Ascot, it even has a Ladies’ Day, where women dress up in the utmost finery.

Firmly established on the English summer social calendar (let’s be optimistic and call the start of September the tail end of summer) Salon Privé is a motor show like no other.

If royalty were to turn up to a motor show, this is the one they would choose, as it’s discreetly genteel and set within the spectacular grounds of Blenheim Palace in Oxfordshire: the birthplace of Sir Winston Churchill, no less.

Here, they do things properly. Instead of the burger kiosks seen at many car shows there are lobsters washed down with Champagne for lunch. Everything stops at 4pm for afternoon tea, complete with scones and cream. The Duke of Marlborough, the current resident of the palace, even hosts lavish dinners for his special guests.

But underneath the pomp and ceremony, it’s actually all about cars and not just the sort of cars that you might find in a period drama (although there are plenty of those too). Instead, there’s everything from classic supercars to modern electric hypercars from the next era of motoring. 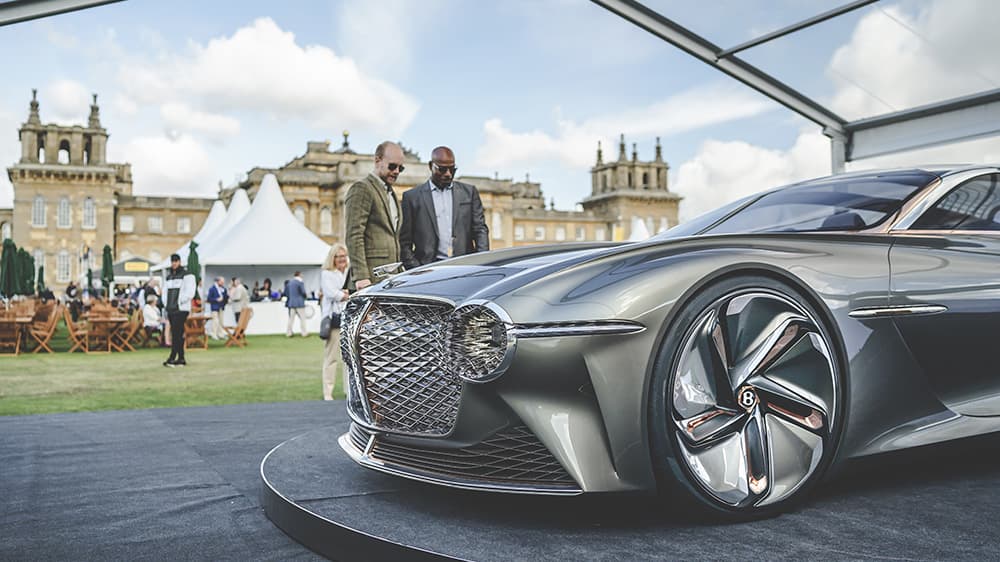 Cars at the Palace

A highlight is the Salon Privé Concours d’Elégance by Chubb Insurance, contested by more than 50 of the rarest and most valuable cars on Earth, each prepared to breathtakingly high standards.

A panel of international experts – often including a celebrity or two – chooses its winners for each category, but every single entry is a marvel in itself. Each year, the classes selected cover a wide spectrum of automotive history, and there’s even room for ‘classics of the future’: the most-recent special supercars.

This year, Salon Privé will be celebrating 100 years of Bentley. 52 privately-owned Bentleys from around the world will be brought together at Blenheim, together with some of the most historically important models from the iconic British brand’s own Heritage Collection. Among them, the oldest surviving EXP2 Bentley alongside the latest; the EXP 100 GT.

The largest-ever public gathering of Bentley cars, with well over 1000 of them set to stretch around the Blenheim lake, will also include a display of recent models including a Continental GT Zagato and the marque’s latest GT3 race car. Expect Blenheim to turn British Racing Green for the occasion.

Each day at Salon Privé – now in its 14th year – offers something different, and stretching from Thursday to Sunday, it’s an extra-long weekend!

Salon Privé Classic & Supercar featuring the Lockton Club Trophy (formerly Blenheim Classic & Supercar) is the spectacular public day on Sunday 8th September. Upwards of 3000 cars will be on display across the palace’s grounds for motoring fans of all ages to enjoy, so you don’t always need to dress up to gain entry to the Salon.

As well as classic cars there will be plenty of new cars such as the sensational Rimac C_Two. Engineered as a pure electric GT and using the expert knowledge gleaned from the brilliantly powerful Concept_One, first shown at Salon Privé back in 2012, the Rimac C_Two combines the very best materials and bespoke technology to create the most technologically-advanced as well as fastest accelerating hypercar ever built.

In total, a staggering 11 new models will be launched at the event, including 5 European debuts and 1 world debut, making this very traditional event a showcase for modern technology as well as automotive heritage.

But it’s not just about looking at cars: there are classic motorbikes on display as well, plus the chance to do some shopping. But this is Salon Privé, so obviously it’s no ordinary shopping. Among the articles you can purchase is a custom-made petrol pump, for example. Even if you think you’ve got everything, there will always be something new to find and see at Britain’s most exclusive motor show.