At the historic Goodwood Circuit in the United Kingdom, an unprecedented collection of incredible ‘KG’ badged Porsches assembled for a one-of-a-kind track day

In 1948 Goodwood Motor Circuit opened its gates to host the first post-war organised motorsport event in Britain. The track was christened by the 9th Duke of Richmond, who completed the first flying laps with over 15,000 spectators in attendance. Sadly the track would close in 1966 due to safety concerns and the increasing speed of race cars. However, exactly 50 years later the track reopened for the now famous Goodwood Revival, which sees classic cars take to the historic track once again.

In August, Porsche history came to life in a truly vivid way as the Porsche Club Great Britain brought together outstanding examples of pre-1973 classics to the iconic track. The event was two fold, with race-ready classics taking to the track throughout the day for hot laps and complimented by a fantastic collection of rare and pristine models of classic ‘KG’ badged Porsches. 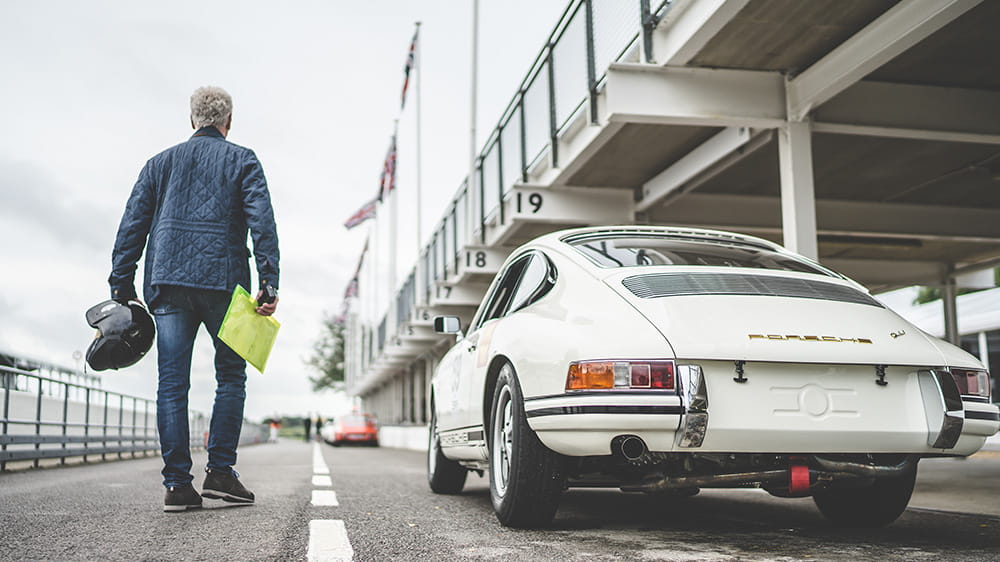 The meaning behind the ‘KG’ badge is a simple one, rather than describing any technical or engineering difference it instead denotes a shift in gears for Porsche as a company. From 1973 onwards, Porsche became a limited public company instead of a limited partnership, which is now denoted by the letters ‘AG’ in Germany. This change was emblematic of Porsche production evolving from a family-run affair into the modern manufacturer we know today.

As the picturesque grounds of Goodwood began to fill up with all manner of Porsches, colour appeared to be the order of the day as a true rainbow of classic 911s nestled into the stable-like paddocks behind the pitlane. This feast for the eyes only expanded as club members and their incredible cars continued to arrive, including perfect pre-A 356s, a rare 2.4-litre 911S and a Carrera 2.7 RS.

Even as the first car to bear the Porsche name, the 356 posses the instantly recognisable Porsche silhouette. The pre-A 356s in attendance were impeccably maintained examples of one of the earliest models, in production from 1948 until 1952. These pioneering classics are most easily identified by their windshield, featuring a two-pane system with a divide in the centre, which was then replaced in the later ‘A’ models with a one-piece windscreen.

At midday the track was cleared as the drivers pulled up for lunch, but the downtime didn’t mean just a tea break. Every single car at the Pre-73 event was parked on the grid for a truly iconic photo opportunity. Set against the scenic backdrop of the Goodwood Motor Circuit, the essence of the event was focused at that moment to reveal the true value behind bringing all of these models together. Classic motoring is as much about appreciation of the past as it is its continued enjoyment in the present. These living examples of automotive history were live and in person, driven and enjoyed as much today as they were in the years of their manufacture.

Authenticity is prized by classic car owners and enthusiasts, and for this the Pirelli Collezione range is the perfect fit. Beginning with an entirely faithful recreation of the look and style of the original tyres, the Collezione range is tailor-made for each model. This bespoke approach also allows for the inclusion of the latest modern tyre technology for even greater performance and reliability. In this way, just as the Porsches themselves are maintained by passion and expertise of their owners, Pirelli Collezione allows for the true experience and emotions of driving incredible classics for many years to come.

To find out more about Pirelli Collezione, visit www.pirelli.com/collezione