Pirelli joined forces with Porsche to sponsor the Porsche Classic event at the Nurburgring Oldtimer Grand Prix. And it was a true festival of one of Germany’s most famous marques

Home road Porsche-fest at the Nurburgring

A classic event at the Nurburgring
You’d run out of fingers if you tried to count them all, but there are nearly 500 Porsches parked in the Porsche Classic area of the Oldtimer Grand Prix at the Nurburgring, representing everything from the very first Porsche tractors (which is how the company started) to the latest 991 full-option demonstrators, including a bespoke green chromaflair paint finish that by itself costs more than a basic Cayman.
Most of the cars though belong to private owners, and it’s the sheer variety of models on display, together with the passion and enthusiasm of their keepers – who come from all walks of life – that makes this event so special. As a celebration of all things Porsche, it’s second to none, and a quick glance at the number plates of all the cars there shows how far people have come: Italy, Russia, Denmark, Sweden, Spain, Great Britain…the list is almost as infinite as all the different permutations of Porsche present. From 356 to 993 to 997, there are probably no two cars there that are absolutely identical. 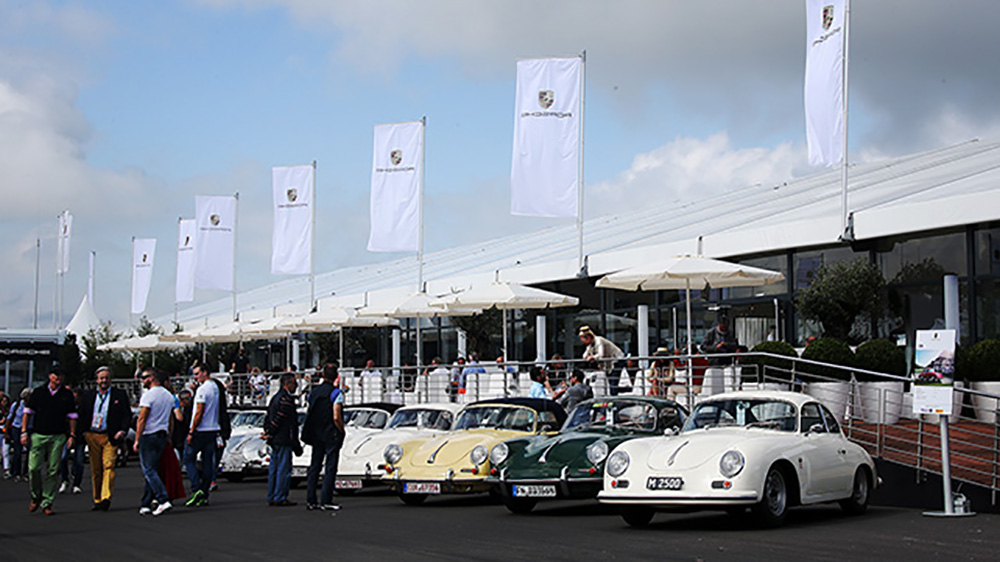 Part of the collection
There’s one thing that all these Porsche models have in common though. There’s a Pirelli tyre to fit them all (with the possible exception of the tractor). This is thanks to the Pirelli Collezione: a recently-launched range of premium tyres that aims to combine modern technology with classic looks. The result, like a perfect classic car restoration, is a car that actually feels even better than it did when it first left the factory.
Pirelli Collezione now covers practically the full range of Porsche models, starting with the 356, which originally wore Cinturato CN36 tyres as original equipment. These tyres have been updated and recreated for this sought-after car that was the ancestor to the iconic 911. The 911 is still Porsche’s definitive car: despite an attempt in the 1970s to pension it off (more about that later). As a result, there’s a range of Pirelli Collezione tyres to suit every evolution of the 911: with iconic names such as Cinturato P7 and P6000 reborn to rekindle a relationship between car and tyre that helped make the 911 one of the world’s ultimate driving experiences.
Pirelli Collezione tyres are made to measure for the Porsches they are fitted to, which is exactly the same philosophy that Pirelli adopts when it comes to its modern high performance P Zero. And these tyres too are chosen by Porsche as original equipment for the latest cars from Stuttgart, in both winter and summer versions.

Something for everyone
Porsche shatters the myth that sports cars are fragile objects exclusively for the super-wealthy. A large number of Porsche owners use them as their everyday cars, in all weather conditions, which makes having the right tyre even more important. There’s also a huge tuning scene around Porsches, meaning that the cars capture the modern zeitgeist for personalisation. So, at the Porsche Classic, you’ll see everything from a pastel yellow 993 with bespoke interior, to an early 911 with the internals of a modern 997. There was even a Volkswagen minibus that had a Porsche turbo engine dropped into it.
But in the midst of this exotica, the ‘transaxle’ cars weren’t neglected, with a huge gathering of 924s and 968s: brilliantly-handling classics that can still be bought for just a few thousand euros and will only rise in value.
There was also a 40th birthday celebration for the Porsche 928: a car that was originally intended to replace the 911, complete with the option of chocolate brown paint and crushed velour seats that captured its time perfectly.
Pirelli Collezione tyres are available for all these cars as well, underlining one of the key messages of the amazing Porsche Classic event. There really is something for everyone. For any Porsche fan of any description, it’s an essential visit.