Porsche: by land and sea

One couple of Porsche enthusiasts from London is undertaking a road trip with a difference, to raise money for an extremely worthy cause

Porsche: by land and sea

Launch the Porsche
Buy a cool new car, and it’s understandable that one of the first things you’ll want to do is take it on a road trip. A proper road trip, to stretch its legs. But one British couple has decided to embark on a road trip with a bit of a difference. To celebrate their retirement, James and Belinda Richardson from London bought a Porsche 911 4S convertible, in the distinct factory shade of lava orange (there’s a reason for that, which will be revealed shortly). It’s a brand-new car, with less than 900 miles (the currency of distance in Britain) on the clock at the time of writing. There’s a reason for that too.
But retirement doesn’t mean a sedate life for this duo. They’re about to embark on an adventure that will literally take them to every corner of their native country. And the adventure will start when the Porsche clocks up 911 miles.
Starting in Teddington, a riverside suburb of London, the duo aims to visit all 238 lifeboat stations in the British Isles & Ireland, which are run by the RNLI (Royal National Lifeboat Institution) in under 911 hours. This is an organisation made up almost entirely of volunteers, who risk their lives to save people in distress on the sea. The charity, which dates from 1824, is entirely funded by donations, and James and Belinda were inspired by the organisation when they watched ‘Saving Lives at Sea’: a BBC documentary series that looked at the work of the RNLI and its extraordinary crew of volunteers located all over the country in close detail. From there, the idea of visiting every station by car was born - and being Porsche fans, there was no doubt as to the car that they would choose. The colour too was no coincidence: the lava orange echoes the orange used by the RNLI’s lifeboats, while James and Belinda will wear yellow tops: the same distinctive colour as the all-weather clothing worn by the lifeboat crews. They will visit each lifeboat station for a minimum of 15 minutes and posting an electronic postcard from each one. As Andy Warhol said, everybody has their 15 minutes of fame. 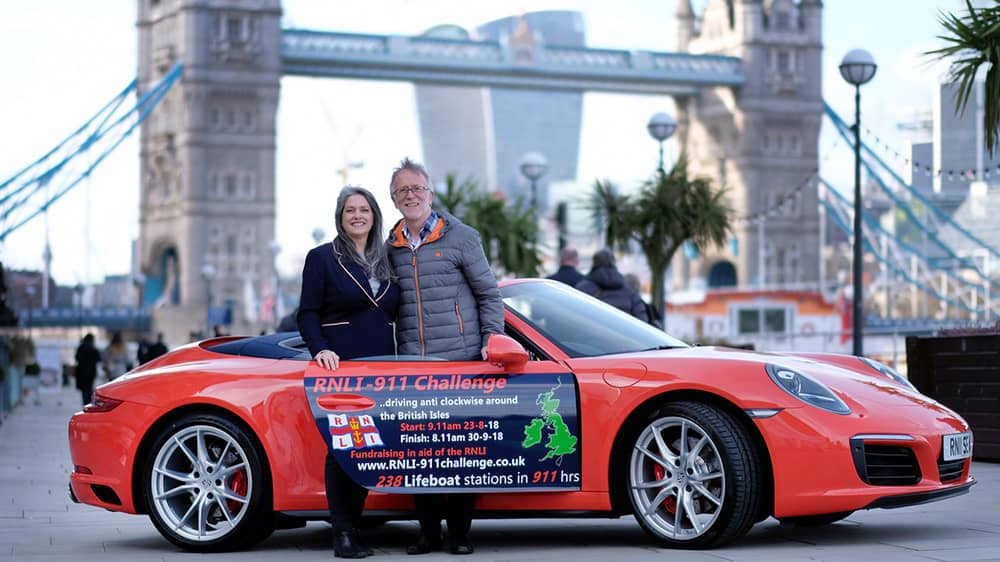 The devil in the detail
Naturally, an adventure like this takes an inordinate amount of planning and logistics. In total, they will be away from 23 August to 30 September, with the route dictated not only by a logical order of visiting the lifeboat stations but also by the schedules of the 35 ferries that they will catch on their odyssey. The ‘British Isles’ and Ireland are made up of a series of islands all around the coast, especially in Scotland. These are often the areas that are most in need of lifeboats, and some of the lifeboat stations are so remote that it’s not actually even possible to take the car there. Nonetheless, James and Belinda will visit them. Nobody gets left out. Organising the ferries was the most painstaking part of the whole adventure, as they don’t all run every day and the schedules are also subject to interruption.
Once the route was established, the next task was to book accommodation, and with so much time spent driving - several hours each day - getting a good night’s rest is important. Wherever possible, they’ve used local guest houses and bed and breakfasts, as an important part of the adventure is integrating with the communities that they visit and hearing stories from local people.
An adventure like this wouldn’t be possible without a reliable support network of backers. Porsche has helped by fitting a front axle lift to help the low-slung Carrera negotiate the ferries and providing routine maintenance inspections at dealerships en route, the car is on Pirelli tyres, and Helly Hansen - well-known for marine clothing - is giving them jackets. Porsche Club GB is also keeping a close eye on progress. Aside from that and some bespoke Koffer Porsche luggage - essential when it comes to fitting five weeks’ worth of stuff in a 911 - the car is entirely standard.

Keeping fit and raising money
As well as preparing the car for the trip, the couple have been busy preparing themselves. A visit to the Porsche Human Performance Centre at Silverstone has helped them focus on nutrition and ergonomics to ensure maximum comfort and efficiency throughout their epic trip, following an in-depth full body analysis. It’s an unusually long period of time to be spending in a car, and they’ll both be sharing driving and navigating duties, so staying in peak condition is particularly important. The exact distance they will cover is yet to be revealed and will form the basis of a competition - but it’s going to be a big number. Most importantly of all, the entire trip is designed to raise both awareness and money for the amazing work of the RNLI, which rescues up to 10,000 people per year through a network of more than 5000 volunteers and 350 boats across the British Isles & Ireland. To donate and follow the progress of the trip, visit James and Belinda’s website: www.rnli-911challenge.co.uk. The aim is to raise at least £56,644: £238 for each of the 238 lifeboat stations, which can make a small dent in £177 million or so that it costs to run the RNLI every year. There’s a yellow lifebuoy button on the top right of the website where you can donate.
And after this particular adventure is over, it doesn’t stop there. The RNLI celebrates its 200th Birthday in 2024, and James and Belinda are already thinking about something special to mark the historic occasion...