Increases in engine power saw cars get faster in the 1960s – and that placed new demands on tyres. Pirelli’s Cinturato impressed the best in the business, including legendary racing driver Juan Manuel Fangio

When it first appeared in 1951, the Pirelli Cinturato was revolutionary. Its structure, with a belt encircling the radial carcass, gave unprecedented stability to the new high-performance tyre and would change motoring forever – starting in the world of racing.

Described in advertisements of the mid-1950s as the strong link in the “safety chain” of Pirelli’s tyre range together with the company’s Stelvio and specialised Winter tyres, the focus was on the Cinturato’s innovative qualities. While it promised to add a “touch of charm” to elegant vehicles as they travelled along the futuristic motorways, above all, its key proposition was that of safety.

Engine power was on the rise in the 1960s and speeds were increasing, leading to the requirement for better road holding for the sports cars of the day. The radial tyre – with the addition of that stabilising belt – began to show its superiority over cross-ply tyres. Originally used almost exclusively on sports cars and luxury models, the Cinturato range was quickly expanded to include sizes for other automotive segments. The tread pattern was “still that of the normal Cinturato”, explained the sales brochures of the time, but that was “fully satisfactory… since the belt under the tread has also proven to be suitable for high speeds”. 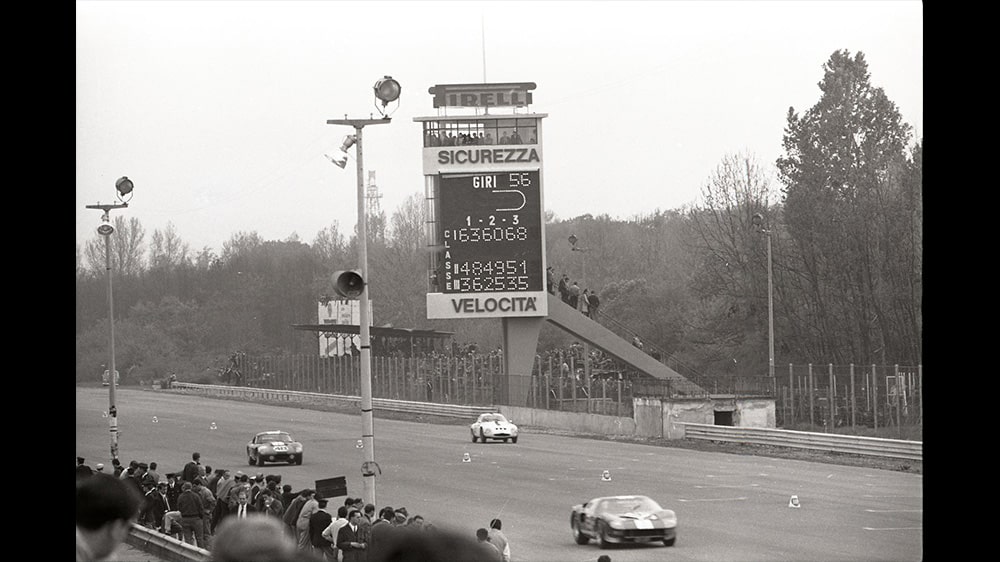 So it was appropriate that, in 1965, Pirelli chose five-time Formula One world champion Juan Manuel Fangio to endorse the “Cinturato è solo Pirelli” (perhaps best translated as “Only Pirelli has the Cinturato”) advertising campaign, which included a series of adverts shot at the Monza race track near Milan.

Arrigo Castellani, the then director of Pirelli’s advertising, had picked up on the fact that in those fast-moving days of mass motorisation, the Cinturato was able to make a further promise in addition to speed and road-holding in extreme conditions. The Pirelli radial tyre also offered safety at the highest level. And who better than a famous racing driver to reassure everyday motorists of the qualities of the revolutionary radial carcass structure?

“I used to race with the Pirelli Stelvio,” declared Fangio in one of the adverts, turning towards the camera as he got out of a white Fiat 1500 Spider after driving through Monza’s famed Parabolica bend at full throttle. “Its safety at full speed was exceptional. Well, the Cinturato is even safer.”

In another advert in the same series, the car was a red Alfa GTA. This time, Fangio is seen coming around the Parabolica before braking with the circuit’s Pirelli Tower in the background. “Extraordinary Pirelli Cinturato!” he exclaims in his trademark broken Italian. The man who in the 1950s had won his races relying on the “safety at full speed” of the Stelvio now recognised that the Cinturato (which the Argentinian pronounced as Sinturato with an "s" instead of a "ch" sound) had extraordinary qualities of safety, speed, grip and flexibility.

After more than a decade on the market, the Cinturato of the 1960s had emerged from the realm of die-hard muscle-car enthusiasts to conquer ever-wider vehicle segments. The tyre that engineer Luigi Emanueli, one of Pirelli’s R&D geniuses, had developed and patented soon after the Second World War was now riding the wave of an international automotive boom. Licences to manufacture the Cinturato had by now been issued to more than 50 makers worldwide.

In 1970, an advertising campaign presented the Cinturato as the favourite tyre of supercars, such as the Lamborghini Miura and Maserati Ghibli, but also of small sports cars, like the Lancia Fulvia HF and the Alfa Romeo Junior Z, cementing its position as a benchmark for the automotive industry.

Safe, fast, grippy and flexible. What more can you ask of an extraordinary tyre?

All materials form part of the company's historical heritage, which is now preserved in the Historical Archive of the Pirelli Foundation

The brand-new Cinturato P7: a new tyre for a new era of movement