One day in Portofino

Welcome to the most glamourous car launch in the world, where Pirelli played an important role as well

Home road One day in Portofino

One day in Portofino

Made in Italy
Portofino: a stunning destination on Italy’s Ligurian coast, redolent of La Dolce Vita, pastel-coloured houses and twisting mountain roads that offer glimpses of the sparkling Mediterranean below.
Portofino, around an hour away from the celebrated ‘Cinque Terre’, has become one of those legendary towns in Italian culture:  more than just a place name on a map. With a picturesque harbour and even a submerged Christ, it’s an achingly cool place to be.
Maybe that’s why Ferrari has plumped for Portofino as the name of its new open topped sports car that replaces the California T. This choice of name tells you a lot about Maranello’s latest creation: it’s a machine designed for high-speed touring on some of the world’s most beautiful roads, very much in the spirit of the California T.
Except that this car is better, with a 39-horsepower increase taking the total output up to 592 horsepower. There’s also the same variable boost management system as seen on the 488 GTB, which improves performance by adjusting the turbo boost to maximize traction, as well as an electronic limited slip differential to enhance the driving experience further. With less weight and more power, there’s everything to like. 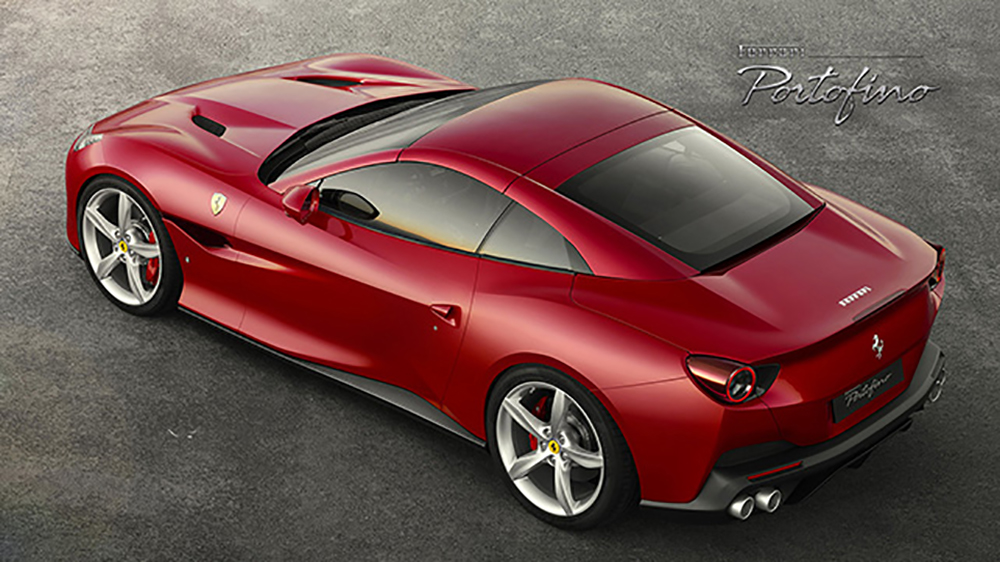 Staying on the road
As the Portofino has been designed for some of the most stunning roads in the world, it obviously needs enough grip to stay firmly planted to them. And so, it’s been equipped with the P Zero: the most sporting tyre in the Pirelli range, which actually started off life as a project for the ground-breaking Ferrari F40 in 1987. Since then, these tyres have been through several different incarnations, with the latest P Zero launched last year.
There isn’t just one P Zero tyre though. Instead there are several variants, each designed for the specific models they are fitted to. The Ferrari Portofino is no exception, with Pirelli engineers working closely alongside their counterparts at Ferrari to fine tune the P Zero’s characteristics to the exact requirements of the Portofino. The result is an exemplary driving experience, with the tyres perfectly in tune with the car. The P Zero for the Portofino comes in sizes of 245/35-20 and 285/35-20.
Ferrari and P Zero have a long an intertwined history, both on the road and the race track. Not only are P Zero tyres seen on Ferrari’s Formula 1 cars, but also on its one-make racing series, the Ferrari Challenge. This year, as Ferrari celebrates its 70th birthday, the Ferrari Challenge enters its 25th year of competition. This is the sort of heritage that the Portofino has been born into.

Why the Portofino is special
Just look at it. The world first got a glimpse at the Frankfurt Motor Show last year, but only now has the official launch taken place – naturally in Portofino itself. There’s even been a new colour created to celebrate: Rosso Portofino.
It’s a pleasure that can be enjoyed by more than two people at a time, as the Portofino even features rear seats – although these wouldn’t be recommended for long journeys, even for the vertically challenged. Naturally for a grand touring car, there’s also a generous boot space for designer luggage.
This Ferrari is focused more on comfort rather than the raw pace of some of its siblings: and this was a consideration that went into the P Zero tyre design for the Portofino as well, which features special markings on the sidewalls to denote that it has been specifically created for the car.
The Portofino’s tyre has been designed to achieve a perfect compromise between luxury and performance, and to make sure that everybody’s sitting comfortably there’s even an 18-way adjustable driver’s seat. It’s perhaps a Ferrari for those who may have never considered a Ferrari before (a remarkably high percentage of California owners were new to the brand). But it’s just as much a product of Maranello than any other.