Whether it be SUVs, saloon cars, luxury sports cars or prototypes, all of the flagship models have their own Pirelli. That's what Tailor Made is 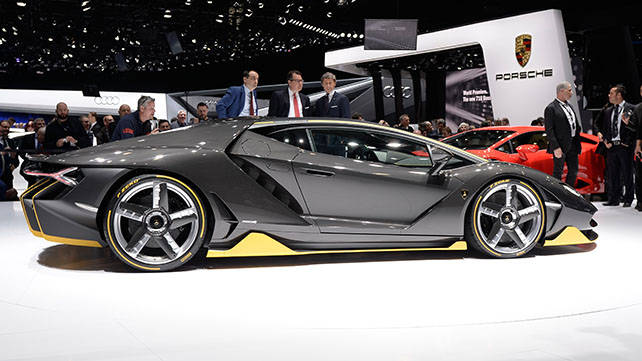 The 86th edition of the Geneva International Motor Show opens its doors today. As we all know, the Swiss event is a sort of grand ball at which the “fairest cars of them all” get all dressed up and put their best foot forward. For course, at any grand ball worth its salt, you also need just the right shoes, and that goes for all the leading car manufacturers attending the Geneva Motor Show, too.

It should come as no surprise, then, that the most hotly anticipated cars on hand at the show today are wearing Pirelli tyres. Whether it be SUVs, saloon cars, luxury sports cars, or prototypes, all of the flagship models have their own Pirelli “slippers”, tailor-made to their own particular needs, whether it be aggressive electronics, high-performance, or driving comfort—needs that the manufacturers’ engineers express to Pirelli right from the early stages of vehicle design, which starts at least two years before the car’s official launch in the marketplace.
The Pirelli engineers who follow tyre development for a given vehicle act as actual technology partners with the car manufacturers and are able to customise the various products within a tyre range, whether it be P Zero, Cinturato, or Scorpion. Each line may have a single name, but they include a great many versions to meet the specific needs of the car that will be wearing them. This is the core of Pirelli’s tailor-made strategy applied, just for example, to the Audi R8 Spyder, one of this year’s most hotly anticipated cars at the show.

Pirelli and the Audi R8 Spyder: perfection in form
Audi’s new Spyder is roughly 50 kg lighter than the coupe, and in line with this reduction in vehicle weight Pirelli engineers were called upon to reduce the weight of the tyres at the same time—and they pulled it off. The new P Zeros specifically designed for the Audi R8 Spyder are actually 10% lighter than their predecessors, and this weight reduction, achieved by reducing the sprung mass, has also resulted in lower rolling resistance and, consequently, lower fuel consumption.

BMW 7 Series: brake well in the wet and you’ll go far and go safely
Another of the belles of the Swiss ball is the BMW 7 Series, one of the candidates to be crowned Car of the Year 2016. The luxury sedan of this German manufacturer wears P Zero run-flat tyres designed specifically for this model. In fact, Pirelli engineers were asked to emphasise two aspects that were key to the design of the vehicle: braking in the wet and mileage.

In order to maximise both of these aspects, the Pirelli team worked mainly on the tyre’s profile. Specifically, they made the tread flatter, which made it possible to enhance regularity in tread wear and thereby increase the useful life of the tyre while increasing the savings for the car’s owner.

In 2016, there was also another important anniversary for Lamborghini: the one-hundredth anniversary of the birth of their founder, Ferruccio Lamborghini. For the occasion, Lamborghini dedicated the company’s new supercar, the Lamborghini Centenario, to his name, and there could be only one choice of tyre for the car, a custom-designed P Zero. In response to the increase in power of this new Raging Bull compared to the Huracàn and Callardo, the tyres were developed specifically to achieve both greater acceleration and greater handling.

To do this, Pirelli engineers focused on certain key aspects of tyre development, from bead profile (which made it possible to improve steering response time and precision) and tread pattern (to improve the contact patch) to new hybrid reinforcement components (which enhance the management of compound warming).

Ferrari GTC4 Lusso: Four-wheel Steering and Four P Zero Tyres
Ferrari is bringing a restyled GTC4 to the Geneva Motor Show because, as we all know, you don’t change a winning product; you improve it. This is why Ferrari stayed with P Zero custom tyres as original equipment for this heir to the Ferrari FF.

Comfort and performance was the winning combination of the previous model, so these were the two features that Ferrari engineers asked Pirelli to maintain. However, Pirelli’s engineers added one additional benefit by reducing rolling resistance of the new P Zeros for the GTC4 Lusso by as much as 15%. This was achieved by managing the deformation of the tyre as it comes into contact with the road surface, thereby optimising the tyre’s contact patch, which, given the car’s four-wheel steering, is a necessity for the rear tyres, too.

Pirelli, exclusive partner of Maserati
The first Maserati SUV, the Levante, is another of the most hotly anticipated announcements for the 2016 Geneva Motor Show. Based on the chassis of the Quattroporte and Ghibli saloon cars, the Levante shares these cars’ engines paired with all-wheel drive and eight-speed automatic transmission.

As for all Maserati models, Pirelli is the exclusive tyre provider for the new Levante. For Maserati’s first luxury crossover, Pirelli has designed P Zero tyres that use new tread compounds and tyre profiles and structures designed specifically for the Levante and are able to ensure both driving comfort and handling.

P Zero performance meets the light weight of the Jaguar F-Pace
Jaguar will also be presenting its first SUV at the Geneva show. Designed to be ultra-light, he F-Pace boasts a body that is 80% aluminium. Jaguar’s new SUV comes in petrol and diesel models, with engines ranging from 180 to 380 hp, and features the performance and dynamic handling of a sports car, backed by the comfort of the most modern sport utility wagons.

Jaguar had a list of demands for the Pirelli tyres to be fitted on this British SUV, some of which may seem contradictory, such as enhanced comfort and rolling resistance paired with the handling of a sports car. In order to achieve this, Pirelli engineers worked to define specific tyre profiles and geometries for the F-Pace, combined with next-generation materials and compounds. For this new model, Pirelli is the exclusive provider of the 22-inch, original-equipment tyre.

P Zero Corsa and the Pagani Huayra BC: Just Like Formula 1®
As with all Pagani models, the Huayra BC, too, will be wearing nothing but Pirelli tyres. It will be the P Zero Corsas, sizes 255/30 ZR20 and 355/25 ZR21, that give the new Pagani hypercar extreme levels of safety under all conditions of use. This new tyre features a more aggressive, asymmetric tread pattern with 3 longitudinal grooves, much like the cut slick tyres used in Formula One a few years back. This link to Formula One can also be seen in the bead structure and tyre geometries, which have been optimised to support the great stresses and deformation caused by a car with an engine of nearly 1,000 hp.
Pirelli engineers developed a special tyre for the Huayra BC, one that uses new polymers with a greater molecular weight, which enhance pure grip. At the same time, new mixing systems have made it possible to optimise material distribution, thereby reducing dispersion. Finally, the new structures designed for the tyre have reduced overall weight by around 3%.

Pirelli Puts a Silencer on the McLaren 570 GT
Another piece has been added to the technology partnership between Pirelli and McLaren, as the new 570 GT will be wearing nothing but P Zero and P Zero Corsa tyres—225/35 R19 for the front and 225/35 R19 for the rear—that have been custom designed by Pirelli engineers.
The particular feature of this tyre is the innovative, patented Pirelli Noise Cancelling System (PNCS), technology that reduces the level of noise generated within the tyre. Caused by the vibrations generated when the air inside the tyre is compressed as the tyre itself compresses, this noise then gets transmitted from the tyre to the wheel hub and on up through the suspension and the steering column and into the car itself.

This system, developed by Pirelli, makes use of a polyurethane sponge inside the tyre to absorb these vibrations and reduce the noise that gets transmitted inside the car. In fact, the Pirelli Noise Cancelling System reduces tyre noise by up to 2-3 decibels, thereby cutting overall noise by half and significantly improving driving comfort. The Pirelli tyres designed for McLaren take advantage of the latest in construction technology, in terms of both the materials and the processes used, so it is not by chance that these MC1 tyres are produced at the Pirelli Next MIRS plant, the world’s most advanced, robotic tyre-production facility.

THE FUTURE IS HERE: PIRELLIS SPORTED ON ITALDESIGN’S GTZERO PROJECT
From the most advanced cars of the present to the truly spectacular vehicles of the future.
Pirelli tyres are even a feature on the concept car that Italdesign recently unveiled to the world: the GTZero. A modern interpretation of the classic Grand Tourer, the GTZero has four-wheel steering and a monocoque carbon frame, and puts out zero CO2 emissions, hence the name, GTZero. And with such a name, Italdesign’s new concept car had really no choice but to choose P Zero tyres, Nero in this case, size 295/25 R22 for the front and 315/25 R23 for the rear.

With this roundup, only one question remains: who will be the belle of the grand ball?