At the Milan-Sanremo race, the “Gull Wing” Mercedes is fitted with the Pirelli tyre that revolutionised the world of tyres during the Fifties

Sometimes they make a come-back. And the Cinturato CA67 belted tyre has come back in great style: on the Mercedes 300 SL Gullwing, the car that represented the 2019 edition of the historic re-enactment of the Milan-Sanremo race. One of the first automotive races in Italy, which this year starred the first modern sports tyre in history: the Cinturato belted tyre revolutionised the structure of the traditional tyre, and thanks to its versatility went on to become the longest-running brand in the P Lunga range, showing its “face” (i.e. its tread) in illustrations and advertisements for decades. That’s why we can say that, in this eleventh re-enactment, Pirelli has brought back to the road one of the symbols of mass motoring, expressing the economic miracle of the Sixties. 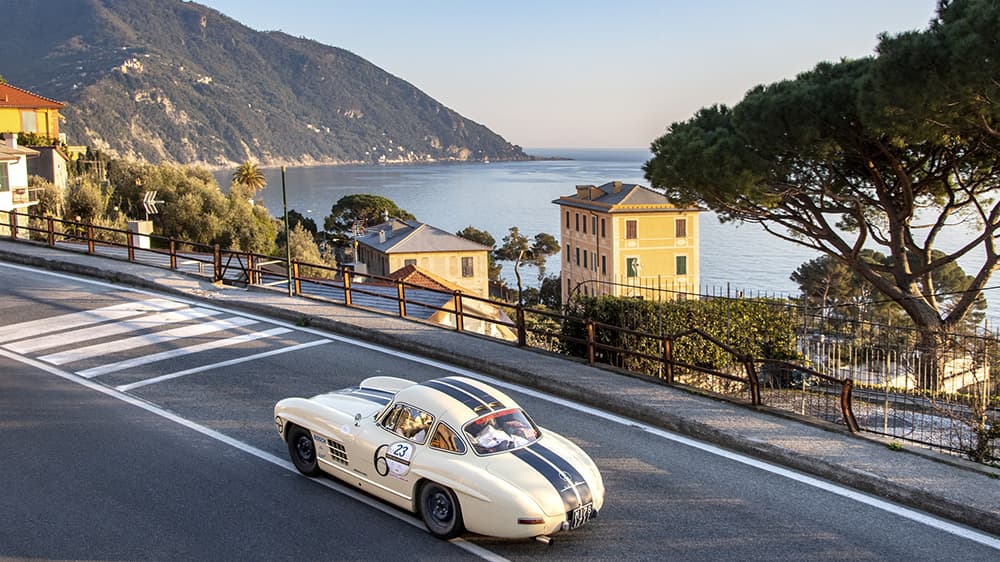 AN ALL-ITALIAN STORY: EMANUELI, THE TYRE GENIUS
The Cinturato belted tyre was the first radial tyre by P Lunga and the first to feature a clear sports character, initially designed to be fitted on models from the Alfa Romeo range. In the Cinturato, the blend of the tread is extremely resistant to high temperatures and to tearing, while the radial ply structure and crossed belts makes the tyre more rigid, and consequently more precise and suitable for the first sports cars of the modern era. The patent was filed by the Milanese Luigi Emanueli, founder of modern electrical engineering and tyre genius, so much so as to be remembered as "the father of the Cinturato belted tyre". Before becoming the longest-standing brand in the Pirelli range, the Cinturato had to earn its claim to fame, in a context - the Fifties and Sixties - in which comfort was favoured over sporting prowess. This was the beginning of the segmentation of the automotive market as we know it today and the very first genuine sports cars were making an appearance in car manufacturer price lists; for a character-packed tyre like the Cinturato CA67, undermining the predominance of its competitors with a conventional structure, such as the Stelvio and Sempione, was no easy feat. But it didn’t take long: as early as 1954, the CA67 was able to become the face of Pirelli, as testified by the advertising images and trade fair booths of the P Lunga, which for decades bore its silhouette and its tread. CA67 remained in the range up until 1980 and today it plays the starring role in Pirelli Collection price lists, where vintage car fans can find tyres with a classic appearance that ensure consistency with the original ride of the cars, but are built with modern materials and technologies. The Cinturato brand, on the other hand, was never discontinued from the range and is now available in version P7, one of the Pirelli tyres with the greatest number of type-approvals.

THE FIRST BESPOKE TYRE
Sports prowess and customisation are still fundamental building blocks of Pirelli’s DNA, and this is due precisely to the launch of the Cinturato. The "367 tread" marked the beginning of the Perfect Fit strategy that today, thanks especially to the P Zero range, continues to constitute the focus of the Milanese company to stand out in the market, offering prestige and premium car manufacturers the right tyre for every car. The Cinturato CA67 belted tyre - as it was quickly renamed - was the parent which was subsequently followed by specific applications, modified according to the cars that they were fitted on. A Perfect Fit ante litteram, which inaugurated a long tradition of bespoke projects that continues to this day.