Pirelli once again took up residence at Blenheim Palace for the truly epic display of motoring excellence known as Salon Privé this summer. Combining a garden party and motor show in one, it once again proved to be a memorable occasion – a cut above most automotive gatherings

Salon Privé always offers a celebration of both incredibly rare classics and stunning modern supercars in an exclusive environment. And this year Pirelli was hosted at Blenheim Palace like never before. As was only appropriate, we brought with us a small slice of fine Italian living to a quintessentially British affair. Guests enjoyed espresso and cappuccino from Café Milano, housed within a bespoke P Zero showroom built out of glass and steel, before moving to our stand’s outdoor lounge for an authentic gelato.

But sweet treats and caffeine boosts were just the tip of the iceberg when it came to celebrating an all-Italian experience in the midst of rural Oxfordshire. An Italdesign Zerouno, Lamborghini Aventador S and Lamborghini Centenario comprehensively accessorised our new Pirelli Color Edition P Zero.

Salon Privé, as these three supercars alone proved, was all about showcasing the greatest (and most expensive) cars the world has ever known.

Where power meets the palace
With Blenheim Palace as a backdrop, Salon Privé offers the sort of motoring environment generally enjoyed by the aristocracy. You even reach it via a red carpet. And the watchword is luxury.

Every available space is filled with eye-catching sights: unbelievably rare classics, one-of-a-kind hypercars and trays of lobsters, destined to be consumed for lunch. Not to mention stalls selling tailor-made jackets and hand-crafted English furniture (among other bespoke delights).

Nowhere else in the UK will you find Lamborghini, Pagani, Ferrari, Maserati, Bentley and Aston Martin displays alongside these luxurious lifestyle boutiques. As you travel deeper into Salon Privé, modern marvels give way to increasingly rare classic cars and bikes. What they all have in common is that they’re enthusiastically enjoyed by their owners. You don’t have to be there long before you hear an engine start up. And it’s pretty likely to be a V12. 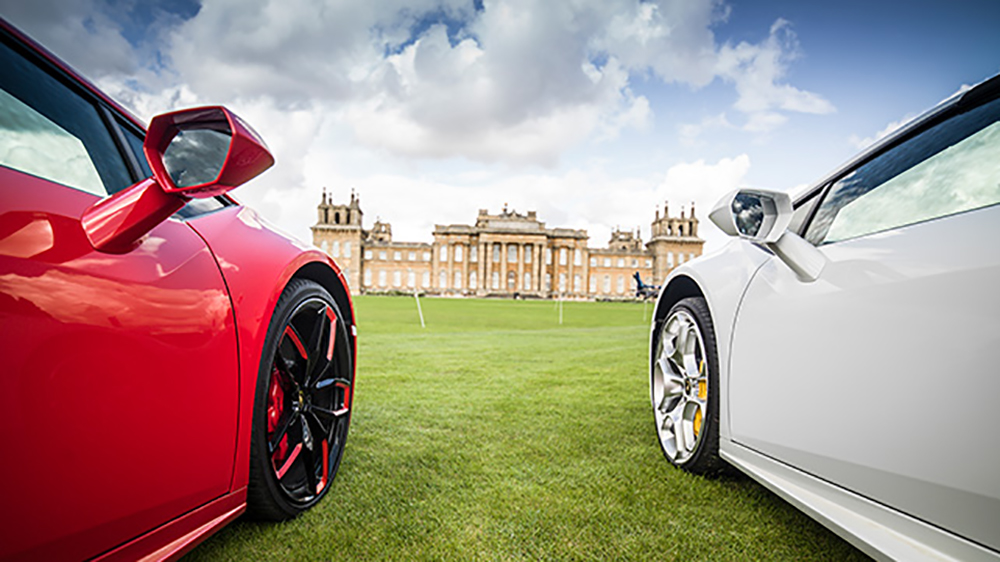 Trooping the Tricolour
In 2017, Ferrari is celebrating 70 years of making some of the most desirable cars in the world. For Pirelli, this connection is particularly strong thanks to the Ferrari F40, which represents the genesis of P Zero and with it our approach to creating tailor-made tyres for unrivalled performance. Enhancing the strong Italian presence, Salon Privé dedicated an entire day to pay tribute to the iconic manufacturer and its prestigious history.

All eras of Ferrari were on display, from early classics to contemporary hypercars. And that’s part of the joy of Salon Privé: while commemorating the past, it also enthusiastically celebrates the present and future. Whatever type of Prancing Horse you’re into, there was no shortage of the latest Ferrari models on the lawns of Blenheim Palace. And plenty of knowledgeable people to talk about them with.

The Pirelli stand contained not just one tricolour P Zero display, but two. The first was formed by three separate coloured tyres – green, white and red – while the second was a single tyre displaying all three colours in one. Forza Italia. And a jolly decent show from Britain too.

On the lawns of one of the greatest garden parties ever, Italy and Britain came together in a unique way that only Salon Privé can inspire - with incredible cars, delicious food and of course Pirelli at the Palace!

Dinner with the Duke
A number of Pirelli’s guests and visiting media were even invited for dinner by the Duke of Marlborough: the man who has the good fortune to call Blenheim Palace home. Held in the what was originally the grand entrance hall to the palace – which has been declared a UNESCO world heritage site – the multi-course extravaganza on Saturday night continued this special celebration of the fine things in life. The Duke himself is a keen driver and connoisseur of Pirelli-equipped supercars, which is why he looks forward to Salon Privé every year. He’s not the only one.