Every year for over a century, the raising of the speed limit has been celebrated in a fun, iconic race full of symbolism and a sense of community. The London to Brighton is a veteran car race run at an average speed of 48 km/h

More than four hundred vintage cars from all corners of the world launch themselves on a 97 km adventure from London to the sea in the south of England. This is the Bonhams London to Brighton Veteran Car Run, the world’s biggest and most enjoyable event for veteran cars - the very first cars in history. A gentle gallop - scheduled for 4 November - that according to tradition takes place every year on the first Sunday in November to mark the Emancipation Run held 122 years previously to celebrate the raising of the draconian speed limits of the day. To prevent the owners of “light locomotives” from breaking the rules, it was then required for a person to walk in front of each  vehicle waving a red flag. One of these flags was symbolically torn as a sign of revenge when the new raised limits were introduced. This ritual of tearing the flag is faithfully repeated at every edition of the Run shortly before the start, nearly always by guest celebrities. In the past two years these have included the former Formula One team owner Eddie Jordan. The race is one of those international events where VIPs always put in a strong presence. The important requirement is that they enter the race with vehicles built before 1 January 1905. And that these cars - whether powered by steam, electricity of petrol - are approved by the Royal Automobile Club, the organising body, as complying with the rules.  Some of the event’s keenest enthusiasts include Pink Floyd drummer Nick Mason, with his cream-coloured Panhard-Levassor, and TV presenter Edd China. While new entries this year will be the British former racing driver and current Red Bull Racing team manager Christian Horner together with his wife Geri Halliwell, ex-singer with the Spice Girls. The list of car marques taking part is a long one: including De Dion Bouton, Peugeot and Renault from France, Benz from Germany and Cadillac and Ford from the USA. And from Britain Rover, Riley and Sunbeam, to mention only the best-known names. The event also boats the participation of a myriad of specimens from car makers that have been defunct for many years and, in some cases, are now forgotten. Albion, for example. And also Achilles, Bardon, Knox, Flint and many others. And the most famous “veteran”? Its name is Génevieve and it’s a Darracq from 1904. It was christened after the patron saint of Paris, where is was built, by the director of a 1953 film of the same name based around her and the celebrated Run. 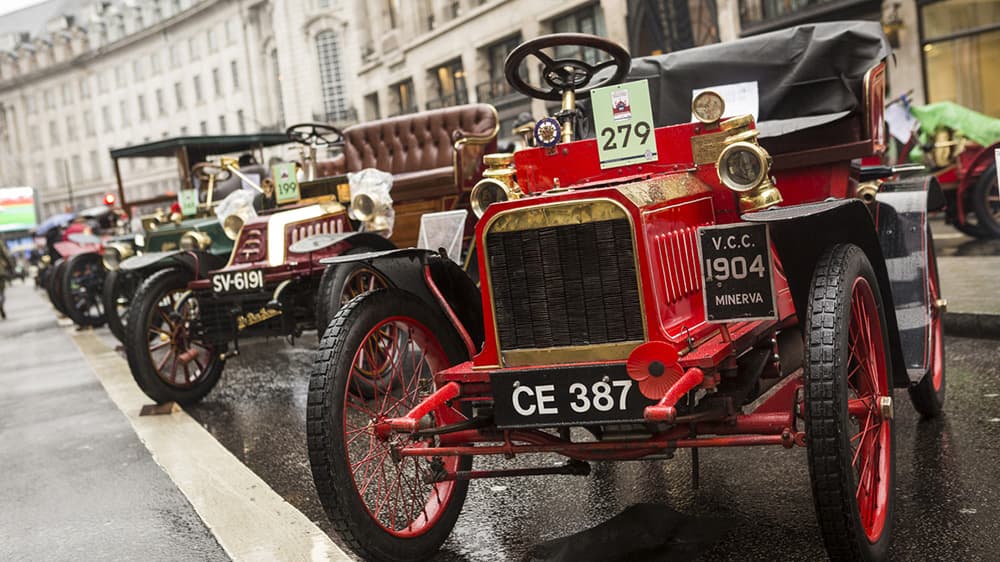 The London to Brighton isn’t a competitive race: to win you just need to cross the finish line in Madera Drive before it gets dark. The first cars usually begin to arrive at around 10 am, but whatever the case the maximum time limit is 4.30 pm. This is why, in view of the fact that these “old ladies” travel at an average speed of 48 km/h, it is necessary to leave at dawn. And the start itself, or rather the two hours leading up to it, is one of the most moving moments of the entire weekend, when in Hyde Park - still during the night - you can just make out the distant acetylene headlights slowly advancing towards the starting line. You really feel as if you’ve travelled back a century in time, to the dawn of motoring. Some, if the truth be told, don’t even manage to set off. Others do so with a physical push. And yet others break down as soon as they’ve gone round the first bend. Just the sort of behaviour you’d expect from a bunch of supercentenarians, after all, something you have to allow for. At the halfway mark a first reckoning can be made of the cars still going and those that have been eliminated or have pulled out. Last year 86 were missing at the finish line.
This edition will be the first in which the flow of cars leaving the capital will be split into two as far as Croydon, where they will leave the suburbs. Then there will be the classic rest stop in Crawley, at the halfway point, with catering provided by Harrods department store as tradition dictates.
For anyone without a sufficiently elderly vehicle, meanwhile, Friday evening will see the usual Bonhams auction in New Bond Street offering a few cars that have already been registered for the London to Brighton. Buyers will be able to try their purchases on Saturday morning, while in Regent Street - just off Piccadilly Circus - the Regent Street Motor Show will be held. This event in the heart of London’s shopping district, with a car show and a Concours d’Elegance, attracts a huge crowd of visitors every year. Always on display is also a large number of modern and classic cars, this time including a special selection of Jaguar XK120s to mark the 70th anniversary of the model.

What colour is
your car?