Football and four-wheel excitement in San Siro. The show will continue next week on the Monza circuit with the start of this season's Lamborghini Super Trofeo and Blancpain Endurance, all with Pirelli tyres

Inter, Lamborghini and P Zero: celebrating the best that Italy has to offer
Pirelli’s association with Inter in Milan is one of the longest sponsorship deals in football history, dating back to 1990, and there was a brand new logo on the players’ shirts as the team faced the might of Napoli at the mythical San Siro stadium over the weekend. 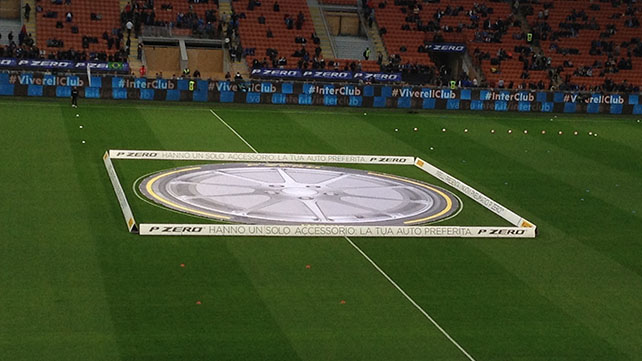 In place of the usual Pirelli logo, emblazoned across the chests of footballing legends such as Mauro Icardi, there was the new Pirelli P Zero logo, to mark the launch of the latest generation of the world’s most advanced performance tyre. This one-off shirt was especially commissioned for the Inter versus Napoli game, celebrating the iconic tyre that was recently presented to international media in Estoril, which they drove on a series of supercars.

Not only that, but the P Zero logo was seen on the pitch in a special display as well: exactly 30 years after the P Zero was first conceived at Pirelli’s Milan headquarters, just a few kilometres away from the San Siro.

Celebrating Inter and Milan’s links with Pirelli’s automotive world, there was also a Lamborghini Huracan displayed in the stadium, which is exclusively supplied with Pirelli tyres (as every Lamborghini has been since the first one rolled off the production line in 1968).

Racing examples of the Huracan will be seen in action close to Milan next weekend, during the first round of the Blancpain GT Series at Monza. This also marks the opening round of the European GT4 Series and the Lamborghini Super Trofeo Europe – which is an exclusive one-make championship run by the fabled Sant’Agata-based manufacturer.

Lamborghini is also a favourite marque among the players: such is the love that Icardi has for his team, for example, that he even bought a Huracan Spyder in blue and black, echoing Inter’s famous stripes. And with Pirelli’s agreement with Inter recently renewed until at least 2021, the association between the Milan club and the highest echelons of the automotive world will continue for a number of years yet.

The match, which got away at 19:45, resulted in a two-nil win for Inter against Napoli: proof that the Pirelli name is leading the way even when not fitted to a car…

China red or Ferrari red? or Paint the town red?