La Coquette Italienne and George Williams have experienced the American dream through the world of Pirelli: unique, unpredictable experiences in the name of maximum performance

For the launch of the new P Zero tyre in the United States Pirelli wanted two of the biggest names on the internet - La Italienne Coquette and George Williams - to experience its interpretation of the American dream.
We have profiled them on these very pages: the Italian model who lives in Paris and writes the fashion blog "La Coquette Italienne", using a unique style that mixes Italian taste with French grandeur; and a young photographer from London who has made a living from his passion for supercars, following motorsport events all over the world. 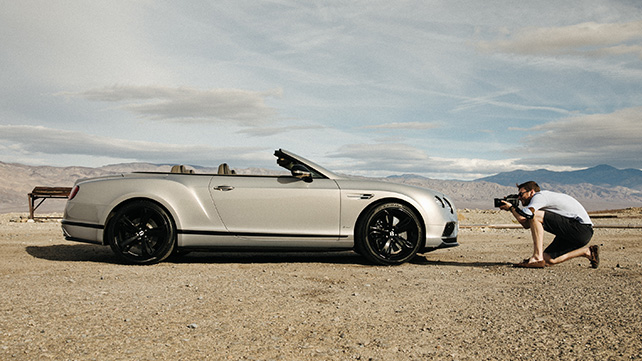 P Zero™ World Los Angeles: the flagship store in central California
The first stop on this American journey was in Los Angeles at 10,349Santa Monica Boulevard, just down the road from Beverly Hills and home to P Zero™ World, a concept store which is far more than a simple tyre shop.After a night spentat the London Hotel, the day began with something unexpected.
"We were told we would be visiting a Pirelli tyre shop in Los Angeles, but who would have imagined it would be anything like this?"The amazed words of the Coquette Italienne make it clear that this flagship store is something special: 750 m2, with supercars on show, screens for watching sport events and relaxation areas to grab a coffee or a drink while technical specialists take care of your car's tyres.
"We got to this enormous building, and even from the outside you could tell that it wasn't a normal tyre shop. At the entrance we were met with a really great breakfast," added George, "But more importantly by some spectacular supercars: there was an unbelievable yellow McLaren 570S! It was amazing to get the chance to see it up close and photograph it." La Coquette Italienne also enjoyed the experience: "As soon as we arrived I realised we were in a classy place: they immediately offered us a special breakfast with Italian coffee and local delicacies. I loved the supercars of course, but being a fashion enthusiast I was really impressed by the Pirelli Calendars on display: I saw photographs of beautiful models in some really dreamy settings."

The valley of death: comfort guaranteed by P Zero!
The second stop was the first real test of the new P Zero tyre in the United States, but if you're imagining a great circuit like Estoril then you're sorely mistaken (that comes later).
The great road trip that La Coquette Italienne and George embarked on is one of the most astounding in the whole of the USA: from Los Angeles to Las Vegas, crossing the famous Death Valley.

Zabriskie Point, Badwater Basin, Mesquite Flat San Dunes, Dante’s View and a stop off at Furnace Creek Inn Resort, an oasis in the desert complete with golf course, swimming pool, spa and all the creature comforts you need after a trip among sand dunes and isolated, desert expanses.

Flying across the Grand Canyon to the Gala Night
La Coquette and George's morning began at dawn with some final photos in Death Valley: the best moment to appreciate the poetry of the surrounding natural beauty.  Then the last few kilometres in the Bentley to Boulder City, where another breathtaking experience awaited them.
"We drove to the city's airport and left the Bentley there; I was a bit disappointed, but what was coming up next was even more amazing," explained George.
The American dream is one of the biggest in the world, which meant that the next experience had to be a big one, too; that's why, before the P Zero Gala Night our "influencers" flew over the Grand Canyon in a Pirelli Jet, the Perfect Fit experience which broke the speed of sound.

"The Gala Night was at Keep Memory Alive , the centre for research on Alzheimers
designed by the architect Frank Gehry; honestly, it was a completely different kind of place to what I was expecting, but the whole trip has been full of surprises and thought-provoking, and I discovered a new side to Las Vegas," reported La Cocquette.

P Zero: performance on the track
What better cherry on the cake for our two heroes at the end of their journey than testing the performance of the P Zeros on the track, behind the wheel of some of the best supercars in the world?
The theatre was the Las Vegas circuit and, after the usual photos, it was time to start racingLamborghini, Pagani, Mercedes, Porsche, Ferrari and Audi all on  the same circuit, and all of the cars fitted with P Zero tyres, customised for ultimate performance.
"I drove a Porsche, a Mercedes and GT racing car: supercars are my passion, I spend my whole life photographing them, but I also love driving them. Being able to race round the circuit in a completely safe environment was one of the most adrenaline-filled experiences of my life." For George it was like a playground, but La Coquette, who may have been most at home at the Gala Night, also took to the track: "Driving a Lamborghini was an amazing experience: it's got a unique style!"

An journey full of the unexpected, one surprise after another, in the home of Hollywood special effects; what will our two stars take home with them from the trip? "It was a full immersion experience in the world I love, with lots of my favourite cars and full of surprises. I'm really happy with the photos I've taken and what I've got," - the words of a visibly emotional George.
"It was all wonderful, from P Zero World to the trip in the Bentley in Death Valley - which I was a bit worried about at first, the amazing flight in the jet, the big gala night where I could admire the fashion side of Pirelli, and then the day on the track where I saw that even when you're surrounded by roaring engines, there's definitely a bit of glamour to be found."