Where should you go on your summer holidays? How about… Germany? We found several good reasons to go there: mostly Porsche-related.

30 years of 964
Every year, the Porsche Classic at the Nürburgring’s Oldtimer Grand Prix in Germany seems to surpass itself. And each time there’s a different theme as well, with Porsche celebrating its 70th anniversary this year. Not only that, but it’s also the 30th anniversary of the Porsche 964: an iconic model in the evolution of the 911 species, which paved the way for the final air-cooled 993.
So to mark the occasion, the Porsche Classic event hosted what was probably the biggest gathering of 964s seen in quite a while. The 964 replaced the classic 911 – known as the ‘G Model’ with 85% of parts being brand new but the silhouette still instantly recognisable as a 911.
But it wasn’t just the looks that were updated, with plastic bumpers, for instance. The 964, which first saw the light of day in 1988, was the first Porsche to offer four-wheel drive (with the Carrera 4 model) – and visitors to the dedicated 964 exhibition at the Nürburgring could take a look at a special cutaway version of the transmission, which explains exactly how it works.
The four-wheel drive version still retained a rear-drive bias, with 69 per cent of torque going to the rear axle and 31 per cent to the front. However, the torque could be re-distributed to suit different driving situations, making it the most adaptable Porsche yet produced. It was also the first 911 to offer Tiptronic: an automatic gearbox, with paddle controls on the steering wheel.  In so many ways, the 964 was a pioneer, and although 30 years have passed, the iconic shape is still timeless now. 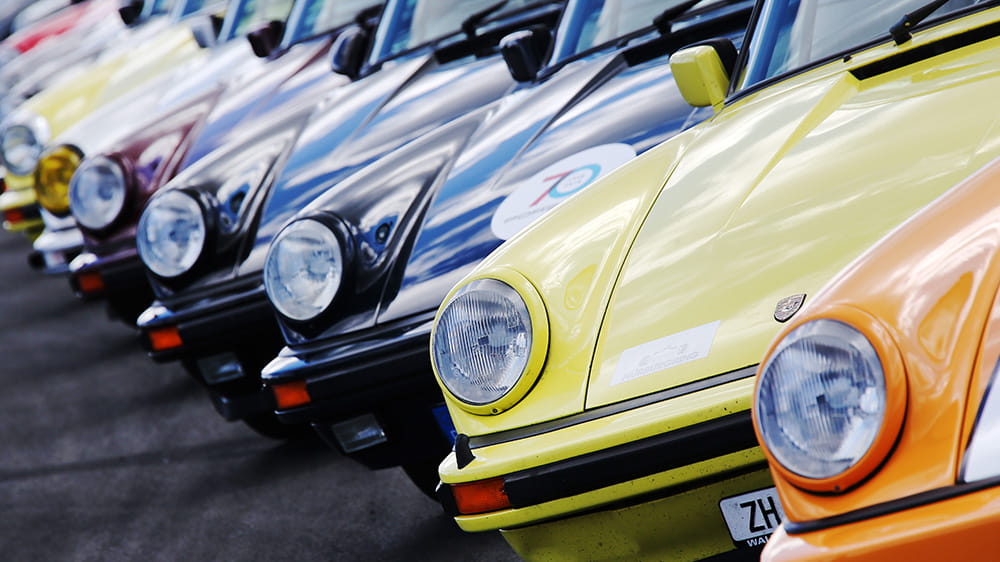 Racing legends
Another important innovation introduced by the 964 model was the Porsche Carrera Cup. The series actually first started with the 924 in 1986, but it switched to the newer 964 for the 1990 season (which remained the model used for the series right up until 1993, with 342 examples built).
The original Cup car wasn’t greatly modified compared to the road version: there was a slight increase in power, closer gear rations, suspension tweaks, and a welded-in roll cage – and that was about it (more important revisions would come in 1992, when the Cup cars gained the fiercer engine from the RS).
What the original Cup cars also benefitted from was Pirelli tyres, with one example of the first race cars on display at the Porsche Classic. These days, Pirelli tyres are available for more or less all classic Porsches thanks to the Pirelli Collezione: a family of bespoke tyres that combine original looks with modern technology to ensure that the most prized Porsches still feel exactly the same as they did when they left the factory. With Porsche also using Pirelli for the first Carrera Cup series, they are a guarantee of originality. The winner of that inaugural 1990 Carrera Cup season was none other than Olaf Manthey, who went on to become instrumental in Porsche’s customer racing activities at Le Mans. A race that Porsche has still won more times (19) than any other manufacturer.

Power and control
Porsche is perhaps the most user-friendly and approachable sports car brand out there, as these 911s – from the first 1960s cars to the current 991 – are all genuinely thoroughbred machines that can still be driven every single day. This has been a hallmark of the brand since the very beginning, attracting diverse personalities such as Porsche guru Magnus Walker and Le Mans star Derek Bell: both special guests at the Nürburgring, meeting the army of enthusiasts who regularly come to this special event.
Every single model is represented, and those who turn up in a Porsche – starting from the earliest 356s – can drive it in and park on the circuit infield to form part of the show. This being Germany, everything is strictly organised by model type and zone.
But for Porsche fans, it’s like being given access to the world’s biggest open-air car museum, with extensive displays of the modern cars and special editions as well. Representatives from Pirelli and Porsche are additionally on hand, to give advice or just chat about these amazing cars.
In the background, there’s also a multiplicity of historic racing taking place on the epic Nürburgring, ranging from 1980s Formula 1 machinery to rally cars. Access to the cars, drivers and paddock is easy: there’s also a dazzling array of souvenirs to be had. Not to mention beer and sausages.
When it comes to choosing the most enjoyable and eclectic weekend in all of motorsport, the Oldtimer Grand Prix might just be the world’s best-kept secret.