Every year, Pirelli hosts a day of activities and headquarter buildings exploration

Blue, red and yellow tyres. Adorable giants bears made from stacked tyres. Children running around surrounded by Pirelli magic and history. No, not a dream but a splendid day that has been happily repeated in recent years at the beginning of September in the extensive spaces of the Bicocca: from the cooling tower to the garden, Arcimboldi Castle, Pirelli Foundation and R&D building.

This year’s Open Day Bicocca was held on Saturday 12 September, an afternoon when families, friends and swarms of children invaded the Bicocca, bringing with them an incredible sense of joy, celebration and curiosity. 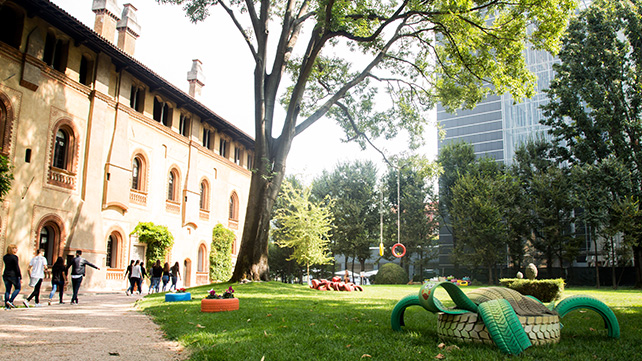 With healthy eating as its theme for 2015, the year of the Italian Expo, Pirelli devoted a large part of the Open Day to this, a practice all too often underestimated in our busy everyday lives. As a result, there was a rich buffet suited to all tastes, even the most discerning palates, and featuring both our culinary tradition and new proposals. Pizza, focaccia, non-dairy ice cream, classical jam tarts, rolls filled with chocolate plus fruit/vegetable crisps – not fried – were all a huge success, followed by an island of seasonal fruit: a riot of aromas and colours that brought a fresh feel to the whole buffet.  The Open Day offered many activities to meet the expectations of those present, from children to grandparents.Our young visitors were literally given a free rein and rushed from inflatables to face-painters, workshops on food/waste material recycling under a fruit pagoda, videogames in front of the tower, a fast lap on a Formula 1 simulator, laughter at the children entertainer Ciccio Tempesta show, thoughts attached to a special tree and souvenirs of the day to take home. And so it continued, all afternoon, over and over.
The fun was not only for the children and those accompanying them had an opportunity to participate in initiatives specially designed for them. In fact, Open Day also offers the chance to meet new colleagues or simply catch up with a quiet chat, far from the workday rush.

There was even time to visit “special” places such as the Pirelli Foundation, the R&D Centre and the Bicocca of the Arcimboldi Castle with guides on hand for visits to three locations that conserve all the Pirelli stories, knowhow and innovation.

Discovering the art of the tread-cutter and seeing how the most innovative projects are born before evolving into products – these are precious features of the R&D Centre, the driving force behind the company. Visitors were better able to grasp the importance of the work done within these walls, every day and all its life. This is where brilliant ideas give wings – and tyres – to company designs.

A visit to its Foundation is the best way to learn about Pirelli’s history. Far more than simply archives, the Foundation tells the stories of all those who have made the company great; the products that have impacted on life and society; and the sporting exploits of the great motorsport champions. The Foundation conserves so much memory, past and present. At Open Day, the employees’ children who attended the Bambini in Bicocca week, from 7 to 11 September, displayed what they had produced at the Pirelli Foundation workshops and acted as a Cicerone to visitors, guiding them around the Foundation.

In the afternoon, people also explored the Bicocca degli Arcimboldi Castle. Pirelli has owned this stately 15th-century residence since 1918 but it is only open to employees on certain occasions. Open Day has become a good opportunity to explore a building steeped in history and that has survived the centuries.
Open Day would not be complete without a cooking demonstration and Marco Ambrosino – executive chef and owner of the 28 Posti restaurant which opened on Milan’s new Darsena in 2014 – provided a cooking show in the Pirelli events space, during which he explained recipes and ways to prepare tasty and healthy dishes with just natural and seasonal ingredients. Participants were amazed at the chef’s knowhow and exploited the opportunity to study the techniques and actions of a professional, perhaps with a view to replicating them and surprising family and friends.

As the sun set, the curtain fell on Open Day 2015 but everyone went home with the memory of another afternoon of fun, colour and happiness.

Your career, training and development...

Work with us >
Let's meet channel
​The list of Pirelli meetings with university students and young graduates organized at major universities...
Newly graduates >