The employees’ well-being is a very special topic and comes in the cafeteria. Since 1915, the history of the working-class Italian food

Pirelli has always cared about the wellbeing of its employees. Already in 1915 the Bicocca factory had set up its first canteen: men ate in the ground floor dining hall and women ate in the first floor space. In those years, if Italian farmers were in some way self-sufficient – subsisting on polenta, potatoes, beans, and chestnuts – the conditions of the working class were more difficult.  Broth and meatballs were the two staples of people's diet in pre-modern Italy. Hard times and a continuous scarcity of food returned with World War II, but these were contradictory times in society: while workers' wives gathered wild endive in fields, Futurist poets and artists dined on dishes called "Aerovivanda" and "Dolceplastico." Pirelli workers found themselves at the end of the war recompensed by a company canteen "with a political price": laborers paid 75 cents for soup while office workers paid 80 cents. The 1946 menu also offered tripe with sauce, giblets and frittata. Pasta finally arrived on the Italians' tables and became a symbol of an entire country: from Alberto Sordi to Totò and Peppino, Sophia Loren and Gina Lollobrigida, Italian cinema of the fifties was a triumph of spaghetti. As a matter of fact, in 1954 young Sergio Alfieri set his own personal record while staying in a Pirelli summer camp: he ate six dishes of pasta at one sitting.  These summer camps, which were created in the early 20th century for employees' children, became even more of a necessity after World War II to improve the health of the children who had risked starvation during the war.  Paradoxically, in the fifties, which were monothematic in terms of diet, company canteens relaunched the concept of "rotating menus". In 1956 Pirelli's Bicocca factory in Milan started building its new Employee Cafeteria. The project was supervised by Chiodi, an engineer, and architect Minoletti who designed a space with a wide, airy nave and a large window that took advantage of the daylight. Meanwhile, conveyor belts and the introduction of the self-service concept made food distribution flow more smoothly. Yogurt and breadsticks, orange soda, lime juice drink and bitters appeared on cafeteria tables. In the fabulous sixties, technology and design became predominant in Pirelli canteens as well: new equipment arrived, such as a 13.5 meter long dishwasher that was specially built for the company.  Daily menus featured "specialties" such as noodles with sauce. Once a week, Milanese-style breaded cutlets or roast chicken were served as a second course dish. The reassuring habit of the "dish of the day" began. The boom of those days was also gastronomic: people were no longer worried about having enough food, but wanted to eat a lot and well. Shellfish and clams became popular, and Coca Cola was a favorite beverage. In the seventies, the freezer became the layperson's tabernacle in the modern kitchen filled with Sofficini pancakes, frozen fish sticks, and industrially-produced ice cream such as Arcobaleno, Piedone or the legendary Coppa del Nonno.  The pyramid-shaped Tetrapack with UHT milk appeared on the refrigerator shelf next to tempting snacks. Everything was "ready to eat" and "instant". The supermarket became popular and the Lagostina pressure cooker was a great help. The seventies were also contradictory years: this was the decade that introduced Nouvelle Cuisine, which taught spirituality and balance. Meanwhile, innovation brought many trendy dishes to the Pirelli cafeteria: Russian salad, veal with tuna sauce, and trout with mayonnaise. Meat was served in myriad forms: cotechino and zampone pork sausages, salami, and Parma ham. It was a triumph of protein. The eighties arrived: those were the days of aperitifs in Milan, optimism, consumption, cream, deconstructed dishes, snacks at any hour, and soft drinks. 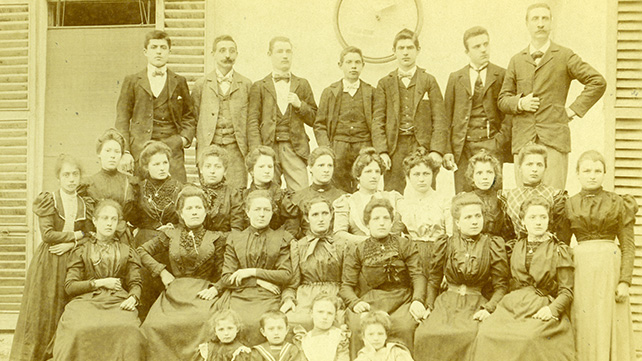 Nothing was more necessary than the superfluous in the dazzling eighties. Burghy, with its hamburgers and fries, created a new anthropological species – the "paninari" yuppies – and fast food became a sociological topic. A few glitches could happen in the food chain: a cow going mad, a chicken with a strange flu, and wine with a methanol content that was a tad too high. Corporate catering styles and models that emerged in the seventies gradually consolidated during the eighties and nineties: food choices diversified and Pirelli's cafeterias represented an integrated system of global cuisine. Goulash and kebabs arrived, while beer was not only served in the Breuberg canteen. Exchanges of information and culture accelerated, but new fears arose: international terrorism, financial crises, structural migrations, and unknown viruses. Progress did not follow a straight path: globalization was rethought and the environment became an important value. With the new millennium, it was no longer possible to throw away 15,000 tons of bread baked and not eaten each year. Movements such as Slow Food and Gambero Rosso suggest a different approach to food that is more balanced and respectful of our body, which is no longer seen as "a perfect machine". Expo 2015 has been a huge book on which millions of people have written their story about sustainable food. And today, "wellness" has become the buzzword in company cafeterias.

Your career, training and development...

Work with us >
Let's meet channel
​The list of Pirelli meetings with university students and young graduates organized at major universities...
Newly graduates >