Home life A story about the industrial city of Milan: theatre, pictures and literature to provide an outlet for work and change

This is the demanding central theme for the XVIIth Week of Business Culture 2018, organised by the Confindustria association and Museimpresa, scheduled from the 9th to the 23rd November (and thus a week so heavily charged with commitments, around the whole of Italy, that it requires an extension of the official timespan). In Milan it coincides with BookCity, more than 1,300 events spread around libraries, theatres, schools, universities, bookshops, squares, clubs, hospitals, prisons, public halls and private venues, to talk about books: novels, poetry, history, politics, economics and so many other subjects. Knowledge and pleasure. Audience events and meetings. In a city of books which is open and welcoming. 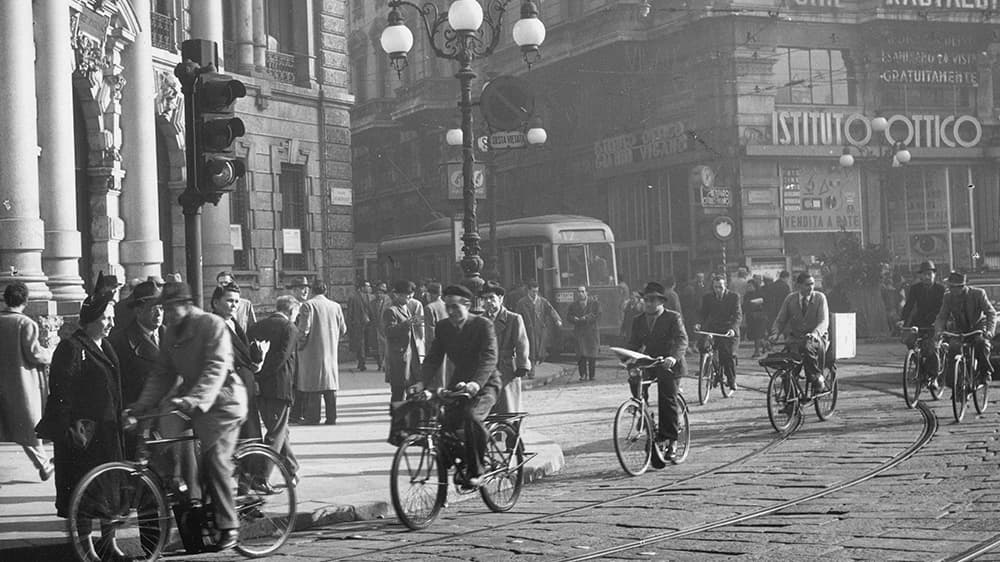 At Pirelli we are going on stage with a “Story about the industrial city of Milan”: literature, conversations, words and images about the factories and neighbourhoods of Milan, spread between memories and the current day. The event is in the Auditorium of the Pirelli Headquarters in Bicocca, on Thursday 15th, at 7 pm, thanks to the initiative of the Pirelli Foundation and the Franco Parenti Theatre, in collaboration with the Bicocca University, specifically in the context of the programmes of meetings between BookCity and the Week of Business Culture. The evening will be enriched with a little trinket from the past: a reading of several extracts from a neorealistic melodrama by Alberto Moravia, commissioned in 1947 by Alberto Pirelli and intended for a production by Roberto Rossellini, but never performed. Those words by one of the best Italian writers will now be brought back to life through the voices of two excellent actors, Marina Rocco and Rosario Lisma.

Rediscovered in the drawers of the Pirelli Historic Archive, Moravia’s text is entitled “This is our city” and describes the everyday life of industrial Milan in the following terms: “Here is the Pirelli factory. Arriving from every direction, the workers gather in the yard overlooking the gatehouse, between the fruit carts and stalls of the cigarette sellers. A weak autumnal sunshine dapples the yard and the walls of the Pirelli building. The workers enter one behind the other, go and put their bicycles in the storage area, under the canopy, and then from there make their way each to their own departments”. People who become personalities. Individuals. And a harmonious unit. Factories used to be social forums, places of encounters and conflicts, cooperation and discussion. Over time, they also became living and crucial centres in which to discover and enjoy, through participation, the dimensions of citizenship linked to work, with all its interconnections between rights and obligations, identity and responsibility. A factory, as an opportunity for social inclusion. The best literature, and in the same way the cinema, the theatre, and photography, have borne witness to this.

As well as Moravia, Marina Rocco and Rosario Lisma will be reading extracts from novels about Milan and texts featured in the Pirelli Magazine. Major signatories: from Dino Buzzati to Alda Merini, from Carlo Emilio Gadda to Giorgio Scerbanenco, from Primo Levi to Ottiero Ottieri. Ending with modern works by Giorgio Fontana, Alberto Rollo and yet other writers. Alternating with these readings will be dialogues with the writers Piero Colaprico and Giuseppe Lupo, and with Pietro Redondi, a professor at the Bicocca University of Milan. Memories. And current events.

so many different features but which retains, as strong as ever, the traces of its identity as an industrial city and keeps them alive through the course of radical economic and social transformations. There are no longer any of those traditional factories, but neo-factories are growing in their place, where the processes of the digital economy are combining together, in a novel way, manufacturing and services, research and virtuous relationships with universities. A topical blend of competitiveness and growth which has its roots in the traditional Milanese attitude of “doing things, and doing them well”. And which initiatives such as the “Story about the industrial city of Milan” help to keep centre-stage in the minds of the public. A cultural choice which has solid economic relevance.

Indeed, industry is an important driver for the Italian economy (we are still the second largest manufacturing country in Europe, after Germany, thanks to our companies in the sectors of mechatronics, mechanics, robotics, rubber, automotive, plastics, chemicals, and pharmaceuticals, as well as the traditional “Made in Italy” sectors of furnishings, clothing and food and agriculture). “Beautiful factories” very often, well-designed, transparent, welcoming, secure. And factories which are sustainable, both environmentally and socially, at the forefront of the green economy in Europe. It is well worthwhile reiterating this to a public opinion which is often unaware, distracted. And to reaffirm it during these difficult times in which anti-business and anti-science attitudes, including within government circles, are being given too much room. Industry means growth, economic development, inclusion, solidarity. It possesses characteristics which bring into play competition and community spirit, wealth and work, technological innovation and social change. It deserves shared memories. And that its story continues.