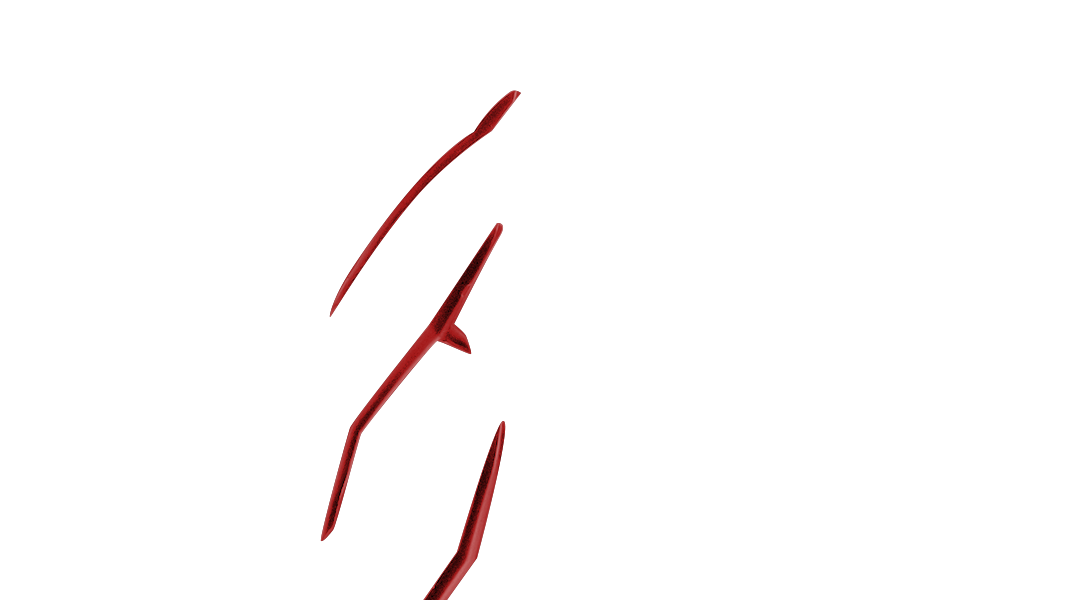 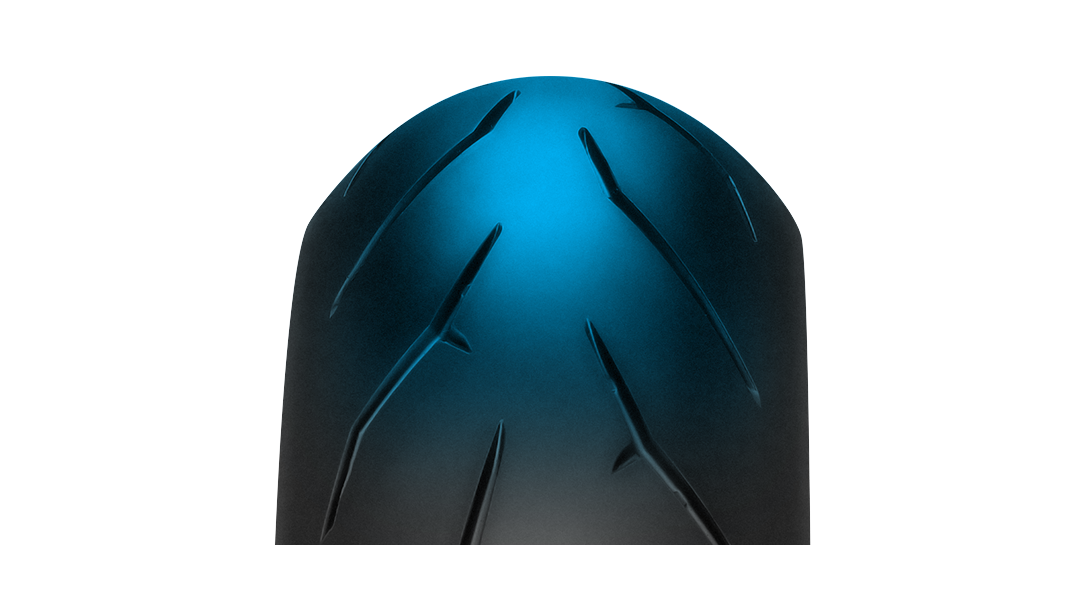 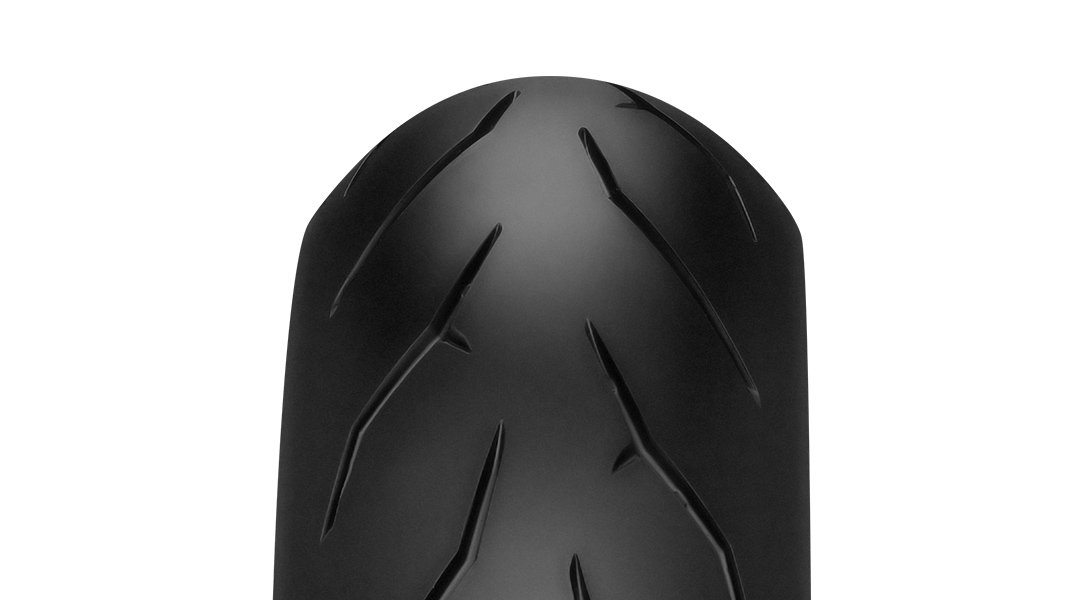 Pirelli's continuous development of radial competition tires in WSBK, the know how acquired through an extensive experience in high performance segments and the cooperation with world class bike manufacturers, have made it possible for Pirelli to improve the performances of the well established Diablo Corsa III.
This development has been focused and adapted to the latest generation of machinery, characterized by important technological features and electronic aids such as:
ABS braking now available on a wide variety of liter bikes, dynamic traction control systems from Ducati and BMW, advanced electronic management systems, multi-setting suspensions, and racing-oriented slipper clutches. 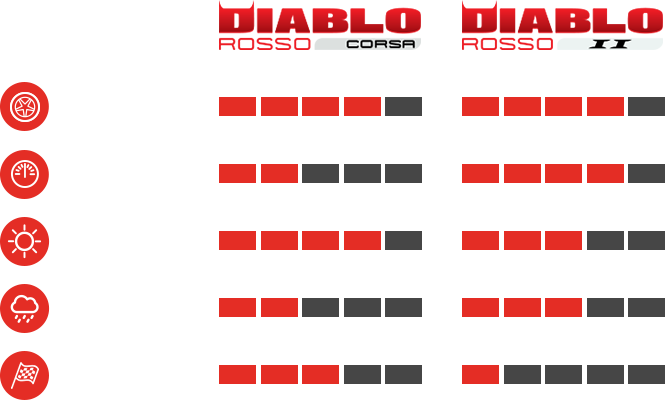 DIABLO ROSSO™ Corsa tire profiles are derived from WSBK racing experience, specifically engineered to deliver the optimal distribution of forces in the contact patch area.
The footprint area is therefore enlarged and all available horsepower can be transmitted to the ground. Utilizing ICS (Ideal Contour Shaping) technology, an integration of the handcrafted care of Pirelli engineers with the support of sophisticated computer modeling systems, DIABLO ROSSO™ Corsa profiles full support while leaning and great confidence in cornering exits at full throttle.

DIABLO ROSSO™ Corsa tread design is the adaptation of the innovative concepts arriving from the supersport reference tire, the Diablo Rosso.
The result is a stunning tire with a captivating design and a 7% land/sea ratio, which means more rubber on the ground.

As the tire wears the less severe incline angle of the groove walls maintains consistent performance by avoiding tread edge deformation, along with a variable groove width for constant water dispersal until the last kilometer.
Both front and rear patterns are designed with FGD (Functional groove design) technology offering racetrack performance (closer to a racing Slick) and greater control on wet surfaces.
In wet conditions, the front tire disperses the water by cutting through and allowing the rear tire to provide adequate grip. On the rear tire, grooves are located exactly where needed for an optimal balance between drainage and warm-up time:

Among the new solutions developed for DIABLO ROSSO™ Corsa, compounds play a primary role.
FRONT
Based on latest feedback from WSBK Riders, the front tire compound guarantees maximum support under heavy braking and corner exit.
This concept of 'high grip with high stiffness' was maintained by combining compounding tools (dedicated reinforced carbon black and resins) which increase tread life and wet safety. The result of this development is a compound with both a racing and street soul.
REAR
III zone compound on rear represents the ideal way to offer the best performance where required in very different conditions (racetrack and road).
The differentiated compounds between shoulders and center zone are the winning solutions engineered to give to DIABLO ROSSO™ Corsa racing performance on racetrack and long lasting durability on road.
• Strong mileage is guaranteed by materials with high mechanical resistance in the central zone, while the high hysteresis shoulder compound gives steady grip response and incredible traction even at high lean angle.
• In the central zone the compound is derived from Diablo Rosso experience, but even sportier; Pirelli engineers have inserted special resins and plasticisers optimized in terms of chemical properties and quantity to ensure the best balance between dry and wet grip. Furthermore the compound mixture is cured with a dedicated process to increase wear resistance, thus mileage.
• The wide shoulders adopt a new softer compound developed and used in the WSBK arena. The 100% Carbon black compound is less rigid especially at mid-low temperature allowing for a very quick warm up, and reducing the difference in temperature versus crown area for a very linear transition from one compound to the other. DIABLO ROSSO™ Corsa shoulder compound adopts the same WSBK resins as the Supercorsa specifically tuned for very high temperature and high levels of stress, which are typical requirements of the racetrack. 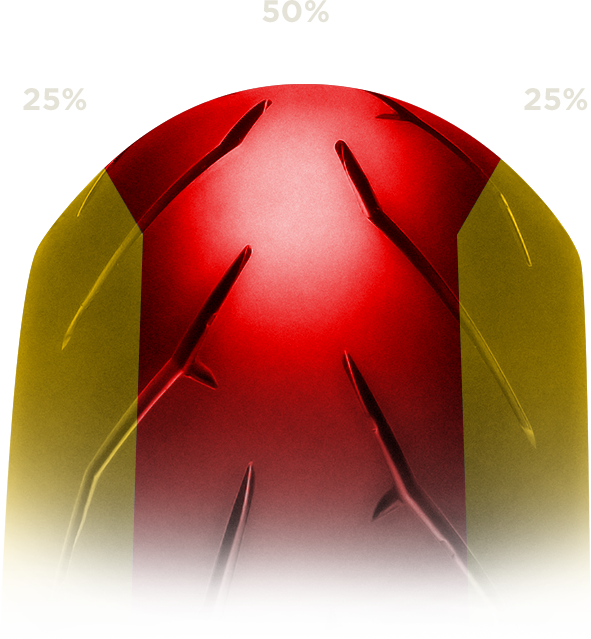 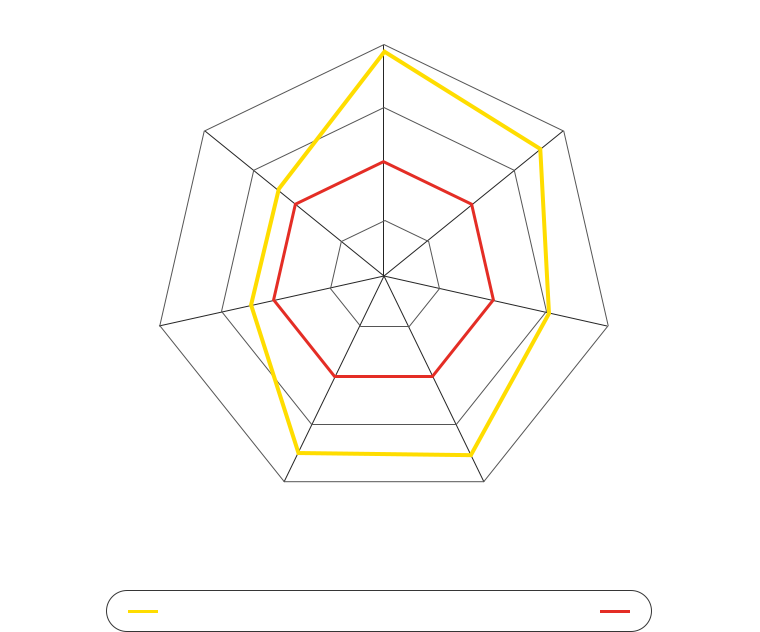 Motorcycle fans already know that the engine's power is never the same as the power actually used by the motorcycle, due to various other elements that dissipate energy, like the transmission.

It's for this reason, and to provide a true indication of the bike's performance, that the power available to the wheels is always measured.

Between the power available to the wheel and the power actually delivered to the ground, the important role of the tire must be considered. In particular, it's important to consider the tire's ability to transfer power and to avoid slipping and sliding.

DIABLO ROSSO™ Corsa offers a new way to measure tire performance: evaluating the ability to transfer the bike's power to the ground and expressing this as horsepower available on the ground.

In fact, Pirelli's new motorcycle tire is the first to have undergone severe tests to measure the actual power discharged on the ground by the bike as it comes out of a turn.
The tests were carried out using one of the most popular super sports bikes in the world, the Honda CBR 1000RR. The bike was tested in its standard configuration, with normal factory suspension and set-up, and with the tires inflated to street use pressure, as recommended by the Japanese manufacturer. Tire measurements were those recommended by the manufacturer: Front tire 120/70 ZR17 M/C (58W) TL; Rear tire 190/50 ZR17 M/C (73W) TL.

Pirelli tested the performance of the new DIABLO ROSSO™ Corsa on its experimental test course in Syracuse, which is normally used to develop high performance radial tires.
With the track's very fast, long curves, the bike's response as it exits turns can be evaluated at the precise moment of acceleration when increased power is transferred to the wheels.

Thanks to the use of data acquisition equipment normally used for Superbike applications, Pirelli was able to measure the necessary parameters accurately to calculate the power transferred to the ground by the bike and hence by the tires.

Starting from a pure scientific standpoint, these parameters included: acceleration (both lateral and longitudinal), vehicle weight, instantaneous speed, and curve angle.
Measurements focused on the moment the bike exited the peak of the turn, when the throttle was opened. In other words, the exact moment when the driver needed the maximum power available on the ground in order to obtain maximum acceleration. In this way, Pirelli's Research & Development staff were able to measure the power in horsepower (HP) that the bike was able to discharge on the ground, instant by instant, centimetre by centimetre, throughout the various turns on the Sicilian track.

The results showed that, coming out of the turn, at the moment the bike is at maximum acceleration, DIABLO ROSSO™ Corsa is able to transfer at least an additional 10 HP to the ground in comparison to the other tires tested.

The increased power transferred from the bike to the ground thanks to the new DIABLO ROSSO™ Corsa means faster acceleration coming out of turns, higher speeds in straight areas, and above all, faster lap times.

The new DIABLO ROSSO™ Corsa is able to offer this type of performance thanks to its innovative features including the three different compound areas on the rear area that make it possible to use WSBK solutions on the shoulder which offer excellent grip, and the Enhanced Patch Technology that increases the area of contact between the tire and the road, making it easier to discharge the bike's power to the ground.

Available sizes for you

THANK
YOU!
An error is occurred. Please try again in a few minutes