Winter tyres: fairy tales and truth - This is something car drivers should know

Home road Winter tyres: fairy tales and truth - This is something car drivers should know

Winter tyres: fairy tales and truth - This is something car drivers should know

Are you one of the winter tyre experts? Test your knowledge by judging the following statements with yes, true or no, not true: 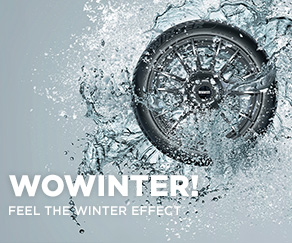 After reading the following sections, you will know which of the above claims are pure (winter) fairy tales.

Safer and more economical: winter tyres have an advantage in cold weather

If the temperatures at night drop to a few degrees above freezing, it is time to change your car from summer to winter or all-season tyres. Because their soft rubber compound does not become hard and brittle at sub-zero temperatures. In addition, their tread pattern contains blocks and sipes. Thanks to this combination, they adhere better to roads covered in leaves, snow or ice. The braking distances of winter tyres on wet roads are about ten percent shorter, on snow about 20 percent. In addition, their tractive power is significantly higher. Further advantages are the higher driving stability, especially in curves, the better handling, the lower tread wear and the higher mileage. Winter tyres are therefore not only safer in the cold season, but also more economical. And because of their low rolling resistance values, the winter tyres of leading manufacturers do not increase the car's fuel consumption.

Also worth reading: 5 golden rules to drive on snow

There is no uniform requirement for winter tyres in Europe

In some European countries, such as Belgium, there are no legal requirements for the use of winter tyres. In Germany, there is the situational winter tyre requirement: this means that in certain road conditions with snow or ice, the car must be driven with tyres that bear the Alpine symbol on the sidewall. In other countries, such as Croatia, there is a general obligation to use winter tyres for a fixed period of time. So anyone driving abroad in winter must find out in advance which regulations apply in their destination country.

These codes on the tyre sidewall identify tyres that can be driven in winter road conditions
On the sidewall it must show the indication M+S (or the variants M&S, M-S and MS), and are more often accompanied by 3PMSF marking (a symbol of a snowflake inserted in a stylised mountain with three peaks or Three-Peak-Mountain with Snowflake): this guarantees that the best performances will be obtained when temperatures are below -7° C. The symbol also attests that it has passed a specific test for type-approval for driving on snow. It is also important to pay attention to the code for the maximum speed which the tyre can tolerate: this is inscribed on the sidewall and must be equal to or greater than the speed set out on the vehicle registration certificate.

When to buy new winter tyres

Although the legislator only requires a minimum tread depth of 1.6 millimetres of residual rubber. However, external experts warn: the legally defined tread depth only offers a residual amount of safety. For winter or all-season tyres, the tread depth should be at least four millimetres. Otherwise it will become critical in wet, snow or slush. And of course winter tyres that have dents, deep cracks or tread cuts must be replaced.

Modern winter tyres contain antioxidants. Therefore, their properties hardly change during normal use and useful life. Nevertheless, the oxygen contained in the air attacks the tyre rubber. Over the years, this can affect the properties of a tyre. The grip level decreases, braking distances become longer and cornering is worse. Anyone who does not use his car every day should therefore not only pay attention to the tread depth, but also to the age of the tyres. A glance at their flank shows how old they are. The abbreviation DOT is followed by the date of production. The last four digits indicate the calendar week and year. Thus, the sequence of numbers 3414 means: The tyre was produced in the 34th week of 2014. Automobile clubs recommend not to use car tyres for more than ten years.

New winter tyres should not be put under full load immediately

It takes a certain amount of time for the new tyres to adhere 100% to the rim after fitting. The fitting paste, which ensures that the tyres are fitted to the rim without damage, must dry. For this reason, new tyres should be driven for the first 300 kilometres with as few racing starts, sporty cornering, high speeds and heavy braking manoeuvres as possible. Because if the tyre should twist on the rim, it may need to be re-balanced.

If the inflation pressure is too low, the tyre loses grip, which extends its braking distances. Even cornering then becomes a risk. Because with every tenth of a bar less, the lateral forces of the tyres shrink. A lack of air pressure in the rear wheels causes the rear to break away in curves and the car to react restlessly when changing lanes. In addition, if the inflation pressure is too low, rolling resistance increases and so does fuel consumption. In addition, the tyre wears out faster and the risk of internal damage increases. Too much air also impairs the performance and driving safety of the tyres. In this case, the central area of the tread is bulged. Its edges lose contact with the road. The consequences: Grip and cornering stability are reduced and the risk of skidding increases. In addition, the center of the tyre rubs off more.

Also worth reading: Everything you need to know about tyre pressure

Summer and winter tyres require the same basic pressures. The vehicle manufacturer determines the optimum tyre pressure. It depends on the tyre size, the load and the use of the vehicle. Only during a longer period of cold weather, it can make sense to inflate the tyre with 0.2 bar more in order to compensate for the temperature-related reduced pressure.

The quality of a winter tyre cannot be recognized by its appearance. The EU Tyre Label provides initial orientation. On it, tyre buyers can read the performance of the tyre in three important categories: Fuel consumption, wet braking and noise. Most importantly, the label values of winter tyres must not be compared with those of summer tyres. This is because the compounds and treads designed for cold and snow have more functional priorities than a summer tyre. This can lead to the fact that winter tyres on the EU tyre label tend to have worse values than summer tyres.

When it has to be perfect: original equipment tyres

If you want optimal winter tyres for your car model, OE tyres (OE = Original Equipment are recommendable. These tyres are individually developed by car manufacturers in close cooperation with leading tyre manufacturers such as Pirelli for a specific car model and are therefore perfectly matched to it. Their quality contributes up to 50 percent of the desired performance of the model.

Narrow winter tyres are no better than wide ones

Indeed, wide winter tyres with a good tread design offer more traction. This means that the wide contact area can better convert the engine's driving force into forward or reverse motion and of course brake better. Narrow tyres are only required if more space is needed in the wheel housing for snow chain operation.

In fact, all the claims about winter tyres made at the beginning of this article are fairy tales. Anyone who spends a lot of time in his car in winter, drives a high-performance car and prefers a sporty driving style should have his car converted to high-quality winter tyres. This reduces the risk of accidents and increases protection for other road users.

Winter holidays:
how to prepare for safety

Winter Safety, how to set off safely in winter

The technology that
keeps you on the road in winter