Blue skies are a welcome, if uncommon, spectacle in the United Kingdom. This meant when the clouds parted and the sun arrived in late May, we knew it would be rude not to head out on the road! So, where to begin? Well, we decided to start with a Riviera Blue 911 Turbo S. And that’s not a bad start at all

If you think driving in the United Kingdom means motorway traffic, service station coffee and pessimistic weather reports, then you would be right. Some of the time, at least. 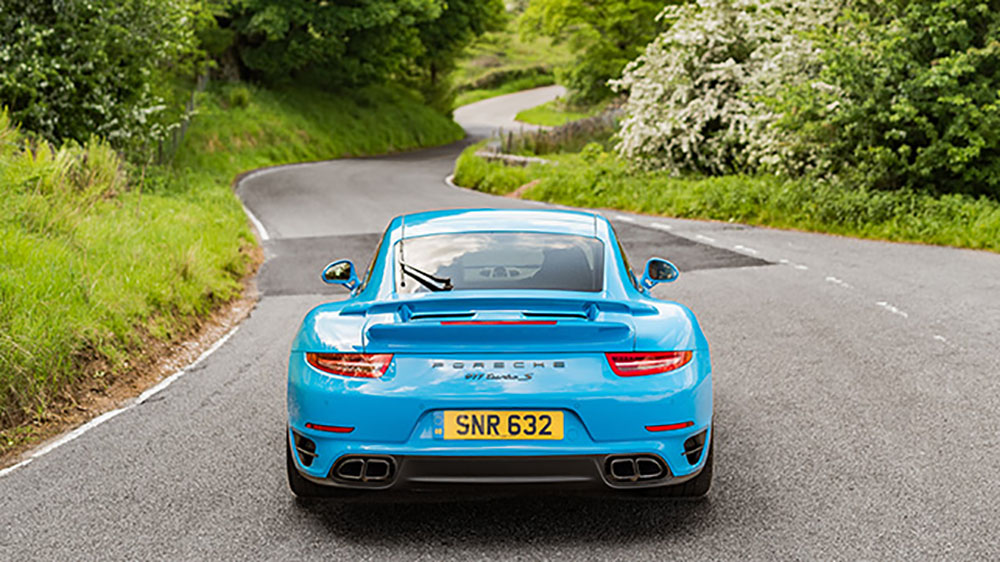 Great driving trips are all about leaving the drudgery of a daily commute behind. In this spirit, we resolved to find some of the best driving roads Britain has to offer. And that meant finding a car which also cast aside the norm. Enter the Porsche 911 Turbo S in Riviera Blue.

So too would we need that other quintessential element to any good trip in the age of social media. Photography. Not anyone would do, mind. We brought Alex Babington, automotive photographer and popular Instagram supercar spotter, to our Burton-on-Trent Pirelli Performance Centre ahead of the trip.

Thanks to our friends from the Porsche Club GB, Alex eagerly awaited the arrival of the promised eye-catching supercar. It didn’t disappoint.

After a quick tyre check up with the PPC team, and a rapid-fire photoshoot by Alex, we all mounted up and headed out to find both great UK driving and some of the best scenery in Britain. We started close to Burton-on-Trent by setting our sights on the Peak District.

This National Park is located at the southern end of the Pennines and much of its 555 square miles is rolling uplands. To put it another way, it’s quite hilly and offers great views.

‘National Park’ may lead some to think that the Peak District is uninhabited but this isn’t true, as villages and towns are dotted across the park. And where there are people, there are roads. And when you add interesting geography and incredible sights to that equation, you’ve got yourself a driving road!

Our drive began as many do, with dual carriageways, lorries and a brief stint on the motorway, but soon the noise and wide roads gave way to winding country lanes. At first, we were hemmed in by trees and tall bushes, but this all turned out to simply be the transition from the norm to the spectacular. In one instant the foliage fell away and the efforts of a gentle climb, of which we were entirely unaware up until this point, were displayed in a rolling green valley below. We were in the uplands now alright.

From there the natural beauty didn’t abate as we passed through, in an unsurprising nominative fashion, Winnats Pass.

The aforementioned sides of the valley also provided an all-natural sounding board against which the timbre of the Porsche engine could be heard in all its glory. After enjoying the full audio/visual experience of Winnats Pass, we left huffing cyclists to road climb in peace and moved on to the nearby village of Castleton.

A spot of pub lunch later and we were back on the road and once again climbing the hills around the picturesque village. The experience here was complete. Shaded roads lined with trees once again giving way to sweeping views of the hills and villages beyond. The roads too were as much of a treat, though life behind the wheel of a Porsche 911 Turbo S itself can’t be too bad regardless. Here, however, more so than any regular drive, the Porsche seemed to be in its element.

Gentle rises gave way to snaking turns before the next length of straight road gave the Riviera Blue supercar chance to open up just a little bit before the next ascent. Each of these driving vignettes was punctuated by crescendos of colour, blue skies and panorama-worthy landscapes.

There we found something we hadn’t expected when we began the journey. Throughout the Peak District there are many famous sights and more than one driving road which will make a top ten list, but we alone found ocular confection and automotive entertainment around just about every bend.

The truth of British driving it seems then isn’t the commute many of us are used to but is instead found at its heart in places like the Peak District. When our trip came to an end, we turned for home not only having enjoyed a day driving but also with mild envy for the folks who travelled these roads as a matter of course.

This raised the question, where else can you experience great driving in the UK? And that’s the kind of question that is a hell of a lot of fun to answer.

All of the fantastic photos from this trip were taken by Alex Babington. To see more of Alex’s work, check out his Instagram profile here.

Tom Dixon: design can be anything, even a tyre