A replica sport bike usually adds a dash of extra charm to an official racing model. Sometimes it even goes beyond superficial improvements and that is certainly true for the latest offering from Triumph. The Daytona Moto2 765 Limited Edition updates the British company’s legendary racing bike with style – and substance – and is approved for the road as well as track days.

The limited edition has been carefully calculated with 765 (in sync with the engine capacity) bikes released for the American and Canadian markets, and another 765 for the rest of the world, making a total of just 1,530.

The bike is being launched to mark Triumph’s return to top tier racing as exclusive engine supplier to the FIM Moto2 World Championship and the Daytona Moto2 765 will have the same triple-cylinder engine that lies at the heart of each racing team’s attempt to clinch the title. 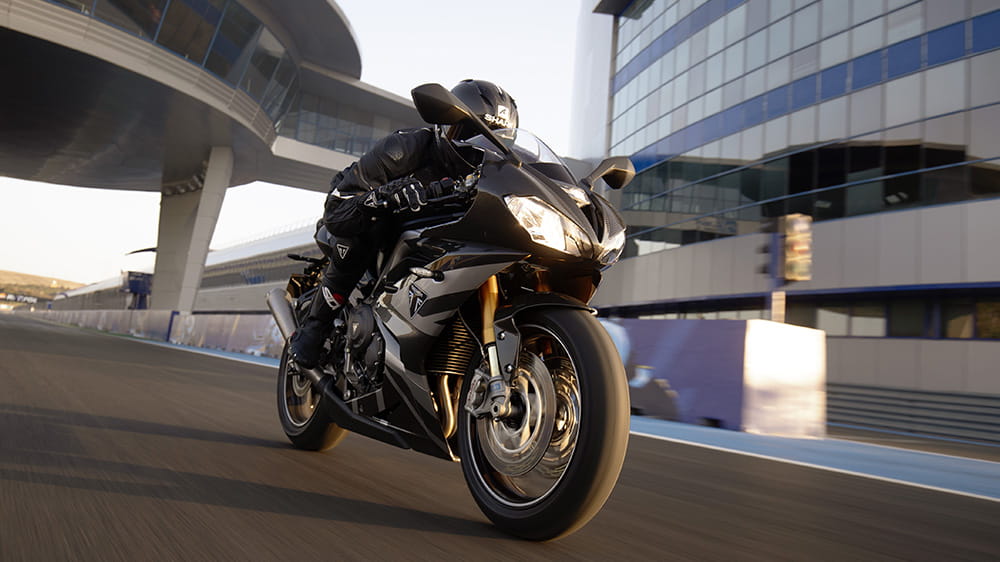 The roar of the track

While the engine’s displacement – or amount of air and fuel sucked in per cycle – is the same as standard Triumph sports bikes, its power and torque values are the highest ever. We’re talking in the region of 130hp and 80 Nm, with the possibility of reaching 13,250 revolutions. These are highly respectable figures for a motorbike with a medium displacement, achieved thanks to a series of components that the designers took directly from engines intended for racing use, from titanium valves to reinforced pistons to modified connecting rods. The titanium exhaust system, meanwhile, faithfully reproduces the sounds of the Championship.

The replica can’t stretch to recreating the paintwork, colours and logos of the track because each driver and team has their own, but the Daytona Moto2 765 Limited Edition still features key racing details. First and foremost the carbon-fibre frame, with typically British colours, inspired by the country’s Union Jack flag with added shades of black and silver.

The bike’s fairings and exhaust system are made with hi-tech materials and help accentuate the racing image, however their main objective is to reduce the weight of the Daytona 765. This goal is also achieved by five-spoke wheels in die-cast aluminium alloy that stand out for being the lightest in their category and a chassis featuring extensive use of aluminium components. A tried and tested structure, the chassis was used in the development of the Moto2 engine and has claimed important victories in TT races on the Isle of Man and the British Superbike Championship.

The Daytona Moto2 765 Limited Edition is a niche motorcycle, designed to give exceptional power and performance on the track and on the road. For this reason the set-up is extreme, proposed in single-seater configuration and equipped with the very best components available, from the Öhlins Racing suspension to the Brembo Stylema braking system, the five driving modes – including Track – and the Triumph Shift Assist electronic gearbox. Pirelli Diablo Supercorsa SP tyres guarantee the possibility of switching from road mode to track mode at any time.

It would be a shame not to use it

With this limited-edition version, Triumph ticks an important box in the history of this sports bike family, which began as far back as 1966 when the American Buddy Elmore won the Daytona 200 with an exciting comeback from 46th place during the qualifying round.

The Moto2 Limited Edition is today the most exclusive Daytona; every bike is identified with its own unique number laser engraved onto an aluminium steering plate with the Moto2 trademark in one solid piece. Equally at home out on the road or on the track, the bike is a collector’s gem that longs to be used.