The tyre beyond all records: ANGEL ST, the sport-touring tyre

At the Nardò Technical Center, the Angel ST tyres got not one, but seven World records in one day! Here is the story of a golden tyre!

Home road The tyre beyond all records: ANGEL ST, the sport-touring tyre

The tyre beyond all records: ANGEL ST, the sport-touring tyre

The will to be first, to be unique, is what drives people to break records. This is something that a team at Pirelli and several motorcycle-industry journalists know all too well after setting a total of seven records. In one day. 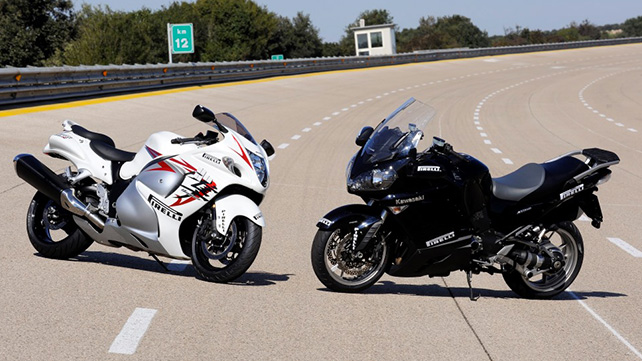 Does a record-breaking tyre exist? Yes, its name is ANGEL ST, and it’s the sport-touring tyre that holds seven World Records.

It was 15 March 2009 at the Nardò Technical Center in Lecce, Puglia—a date and a place that will be ever present in the minds of all those involved in this historic undertaking. And what was their goal? To join the elite ranks of those few people who can say they have broken a world record. Attempting the feat on this occasion were fifteen motorcycle-industry journalists from around the world and twelve Pirelli test riders, who all came together for 24 hours to challenge themselves and to push their limits over the course of 24 hours of constant focus, of suffering, and of rejoicing, all for the sole purpose of being the first to ever accomplish this specific task and to lay claim to a world record. But it wasn’t just one. When all was said and done, these heroes on two wheels actually set seven records!

Breaking a record takes focus, training, tenacity and, in this case, the right location. The Nardò test centre features a three-lane (16-metre-wide) circular track with a total circumference of 12.5 kilometres, making it the longest circular track in all of Europe. With its banked curves, it is possible to reach high speeds in total safety on this track.

The record-breaking opportunity came in conjunction with the launch of the ANGEL ST sport-touring tyre, and Pirelli wanted to prove to journalists that this tyre would live up to its promise of ensuring both high durability and top-level performance. But this would have taken days to do without attempting a feat such as a World Record over the course of 24 hours to demonstrate the quality of this tyre when pushed to the limit.

This was the first of the seven records, but, of course, once you’ve tasted success, you can never get enough. So it was that on a second bike, a 2009 Kawasaki GTR 1400, the journalists and Pirelli’s technical staff participating in the event, including the head of Research & Development (Piero Misani) and of Testing (Salvo Pennisi), went on to set further records in this new category, including a world record in the 12-hour A12 class (for bikes from 1350 to 2000cc) by covering a distance of 2502.873 km at an average speed of 208.573 km/h.

Of course, a record becomes a record because it is difficult to achieve, and here, too, there was certainly no lack of challenge and surprise on the road to success, making the feat even more heroic. Through the night especially, intermittent gusts of wind moved the bikes meters off course as they raced along the outer lane of the Nardò track, which could have compromised the record, but that wasn’t all that fate had in store. Just as the Kawasaki GTR 1400 was on its last lap and being ridden by Michele Corallini, a technician with Pirelli’s Testing unit, a hurdle arrived that no one had expected: a mechanical failure.

Stopping would have meant failing the attempt at the record, so the Pirelli technician, and oldest member of the team at 54, mustered every last drop of courage to push that motorcycle for over two hours, with only the strength of his arms and legs, to cover the final six kilometres separating him from the finishing line where the timekeepers awaited him. Throughout these six kilometres, Corallini was escorted by record officials, following along side in a car to make sure no one helped him and that he kept the bike in the designated lane for the record attempt. Pushing this 300 kilogram GTR non-stop and full of petrol was made even more difficult by the race leathers and boots Corallini was wearing, but, through hard work and tenacity, he covered the entire distance separating him from the finishing line and was lauded by all as the man of the day, the one who best embodied the spirit of this record.

The FIM, which certifies distance and duration records, placed the 2009 Suzuki Hayabusa and Kawasaki GTR 1400 in the A11 and A12 class, respectively, and each of the fifteen international journalists and the twelve members of Pirelli’s technical staff rode at least one of the two bikes for half an hour (20 minutes + prep time) over the course of the 24 hour period.

Triumph and Pirelli team up for the new Bonneville range