The White Elephant trumpeted and the Red Sow once again went for a spin with elemental force: More than 300 high-class historical racing cars and road vehicles inspired more than 10,000 oldtimer fans at the Solitude Revival 2017. From 21 to 23 July 2017, the Solitudering, the legendary race track between Böblingen and Stuttgart, was characterized by automotive classics on two and four-wheels, again. And there were many of them to admire: Fox example a number of the so called White Elephant, the Mercedes Benz Type S from 1927, well known for its infernal roar of the compressors, or the authentic reconstruction of the Red Sow, a rude nickname of the AMG Mercedes 300 SEL. The sedan, which weights 1.6 tons and is equipped with 420 HP, caused a sensation in 1971 at the Spa 24 hours: class win and second in the overall ranking. 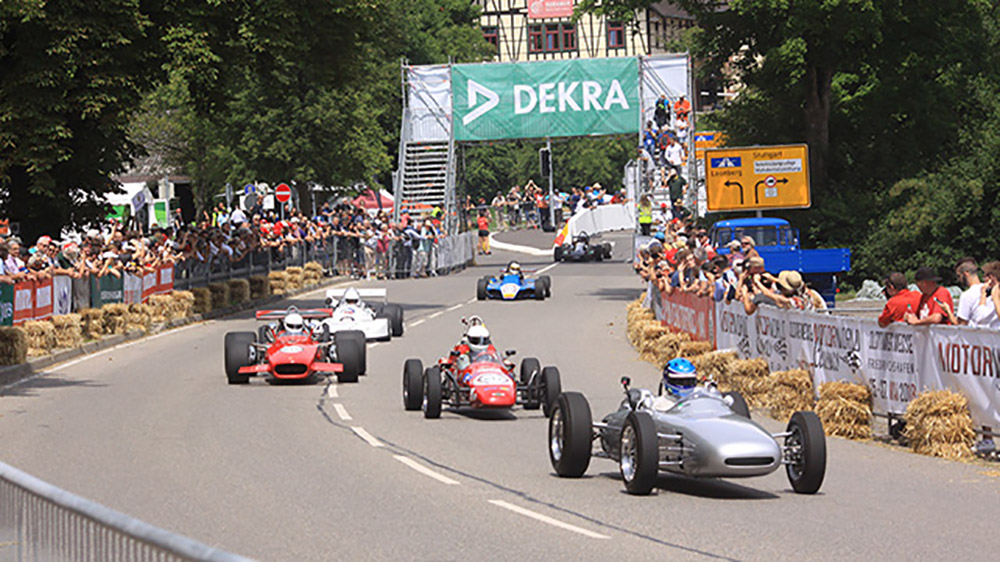 Pirelli was one of the partners of this event. On-site, the tyre company informed visitors about its current product portfolio. In addition to the comprehensive range of tailor-made tyres for many modern vehicles of the premium and prestige segments, this also includes the Pirelli Collezione portfolio with its specially developed tyres for the classic segment. Since several years Pirelli is developing and producing treads also for classic models of leading sports car manufacturers. The look and the design of the treads of these tyres are similar to the historical originals, but in fact they are high performance tyres developed and produced with the latest technology.

Wheeled with Pirelli tyres an edition model of the so-called Heigo Porsche 911, started at the Solitude Revival. In 1979 the former Porsche technician and test driver Dieter Röscheisen built the original of this special vehicle in order to participate in rallies. "The replica we drive now is lighter, has a modified chassis and also about 40 HP more power," the technician explains the differences. Asked about the characteristics of the tyres, which fit perfectly with the edition model, Dieter Röscheisen replies: "A lot of grip, a very good balance and a good-natured behavior in threshold ranges." As the Pirelli P 7 Corsa Classic, with which the edition model has been on the road since 2012.

Dieter Röscheisen and his friend, the German rally legend Walter Röhrl were test drivers for a joint project of Porsche and Pirelli. In 2015 and 2016 the corporations developed numerous Pirelli tyres which precisely matched to the respective vehicle generation from Porsche. Their look and tread design resemble the historical originals, but they are also modern tyres. In order to master this balancing act, the engineers at Pirelli met three challenges: the detailed computer-assisted reconstruction of the tread designs from the old design drawings, the interpretation of the design parameters for an ideal combination of the old tread design with new tyre technology as well as the development of suitable modern rubber compounds.

"The goal was to create tyres with the look of those old days, but a much better driving behavior in dry and wet," Dieter Röscheisen looks back. With their knowledge of how the Porsche models were running at the time, he and Walter Röhrl were able to give the engineers valuable hints and have a correspondingly large share of the convincing performance of the tyres.

At the Solitude Revival there were quite a few models of Porsche to see, and their owners talked shop with Pirelli employees. But not just informative gasoline soaked discussions were held at the happening: the vehicles, the parades and the attractive framework program of the Solitude Revival 2017 offered a lot of fun for all participants again and aroused pleasant anticipation for the next time in 2018.

The art of Perfect Fit