The New P Zero:
from racetracks to the road,
a sporting vocation

It was in fact on the racetrack that the international launch occurred, on the Estoril circuit in Portugal. Now we start with the road show, first stop: Shanghai, China

Home road The New P Zero:
from racetracks to the road,
a sporting vocation

The New P Zero:
from racetracks to the road,
a sporting vocation

The P Zero has a strong link with high speed races, and above all, with F1®. And the F1® circus had hardly arrived in Shanghai for the China GP, than it ended in a victory for Nico Rosberg, after a race rich in overtaking manoeuvres and dramatic changes in the plot caused by the many car contacts on the track and by the strategies for using the different compounds offered by P Zero, in its most highly-rated version, precisely the one that was developed for F1® cars.
What better occasion than the Shanghai GP to follow on from the initial launch of the new P Zero on the other side of the world?
Whilst the F1® teams and the whole “circus” are taking down their booths and tents, and concentrating their efforts on the next GP in Russia, the Pirelli team is staying on at the Shanghai circuit to present before its own clients and the Chinese press the tyre that has made history for the brand.
This underlines once more the very close link that binds the P Zero of the racing circuits to the P Zero on the road. 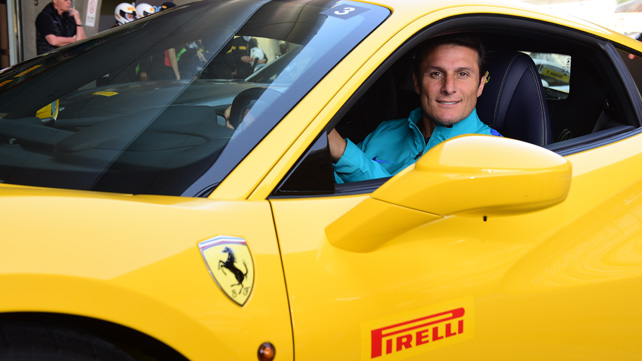 So the Shanghai circuit will keep the P Zero and Pirelli liveries for a few more days, and will host test drives on the track for journalists and dealers to carry out, seeking to push the cars to their limits, to celebrate the technical characteristics of the new P Zero: speed, control, manageability, low noise and reduced fuel consumption.
At the end of that long starting strait, the guests who, during the test days will become amateur “pilots”, will be able to appreciate the new P Zero during braking and while holding that hard right-hand curve with its changing radius, closing back on itself in an almost complete circle: this is where, during last Sunday’s race the F1 supercars, immediately after the start, grazed and even hit one another, shattering the delicate carbon nose-wings into fragments.
Then the manageability characteristics of the new P Zero will be appreciated in the successive curves, all different from one another, and covering almost eighty per cent of the whole of the Shanghai circuit. Lateral acceleration and tyre wear are the challenges that P Zero has to meet during test drives carried out on the Chinese circuit aboard the world’s most prestigious cars.
In addition, the Shanghai circuit’s grainy asphalt will also demonstrate the noise reduction characteristics of the new P Zero, made possible by the PNCS (Pirelli Noise Cancelling System), a special technology patented by Pirelli, which enables a reduction in the noise levels of the tyre cavity. Thanks to this technology, the journalists and Chinese dealers will be able to appreciate a noise reduction of up to two or three decibels.
Apart from the tests on the racing track, which is certainly the most exciting and adrenaline-loaded part of the P Zero launch, that has now become a veritable road show all around the world, the guests can learn more about and appreciate the history of the Pirelli brand, dating back 140 years, but above all they can deepen their knowledge on the details of the innovations and technological research embodied in the new P Zero. In a space fitted out for the occasion, and thanks to meetings with Pirelli’s technical experts, there will be an opportunity for learning about the production details and the technology behind the new P Zero, which enables enhancements in the performance of the world’s best cars: Lamborghini, McLaren, Maserati, Ferrari, Porsche, Pagani, BMW, Audi, Mercedes and other car makers have approved the new P Zero as their original equipment tyres. The achievement of the approval brought by the new P Zero, informs the specialist press and the Chinese dealers that the great car brands have found P Zero’s characteristics specifically suited to their vehicles.
This is why Pirelli likes to describe P Zero as a made-to-measure tyre for the world’s most demanding supercars. Finally, in just two words, #PZero #ThePerfectFit.