That very same multifaceted genius died 500 years ago. But his ideas are still alive today, and they allow us to travel

Home road The history of the car?
It began with Leonardo

Leonardo da Vinci needs no introduction and eludes definition. He appears to have left his mark in all spheres of human experience, from painting, for which he is universally known, to more unusual disciplines, such as geology and anatomy. It can be said that Leonardo has also influenced the automotive world: not only did he design a prototype of a self-propelled car and other rudimentary means of transport, but he also had a revolutionary impact as the inspirer of minds who, like his, were willing to leave their mark on the world. This is the case of Horacio Pagani, who was enlightened by his visionary approach and by the encounter between art and technology, which Leonardo theorised, in creating works of art on four wheels, which collectors dream about cherishing in their garage. Similarly, the passion for design and thorough technical research are at the heart of all activities conducted by Pirelli, which has pursued a passionate task striving towards innovation in its home town for almost a hundred and fifty years. Just like Leonardo did when, at the end of the 15th Century, he created most of his works of genius right in the city of Milan. 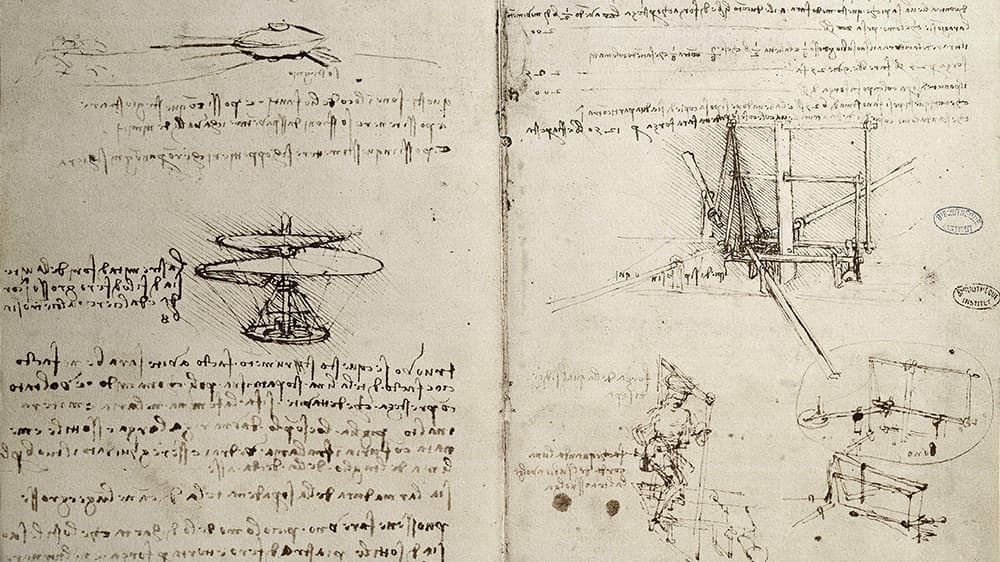 THE SELF-PROPELLED CART, 400 YEARS BEFORE THE CAR
Especially when donning an engineer’s clothing, Leonardo always pursued motion, so much so that he tried to give even inanimate objects motion, at a time when the only motive forces were animals or people. His insights were so innovative that it was as if Leonardo had given his peers a sneak preview of those inventions that mankind would actually introduce and develop many years - if not centuries - later. The design of what is considered the ancestor of the car was found in Codex Atlanticus, a large collection of his writings and projects; since it was a device capable of moving autonomously, the self-propelled cart is an invention equipped with wheels, driven by a spring mechanism that sets in motion a complex system of gears, and which uses a rudimentary differential to turn. The reproductions of this machine have proven that it works, even though the movement it is capable of completing is by just a few metres. The cart was probably intended to move objects, to astound the nobility at dinner parties or during performances; the fact is that this masterpiece of early mechanical engineering continues to impress to this day.

"THE MOTIVE POWER IS THE CAUSE OF ALL LIFE"
There were however several other inventions whose precise aim was to move humans, and in even more unusual ways compared to a mobile cart. As you know, Leonardo was convinced that man, with the help of science, could fly. So he studied the fall of heavy bodies, the movements of air and the flight of birds, and conceived structures that reproduced these characteristics. The result was a bizarre - but functioning - parachute, the prototype of a flying car that was allegedly built and tested by a friend of the inventor and a project reminiscent of a modern glider. He is also the inventor of the "aerial screw", which can be considered a progenitor of the helicopter due to its large "propeller" that was supposed to screw into the air on receiving the thrust of a spring motor. But Leonardo did not want man to reach the sky alone, but also to delve into deep water: some of his sketches also include the draft of a diver, a life jacket and webbed gloves to facilitate swimming. In an effort to prove that the Renaissance man was the link between the earthly and the divine, Leonardo da Vinci definitely played his part. And we now also travel thanks to him, thanks to the car and to the imagination.