Ferrari made Silverstone a central destination on their world tour to celebrate 70 years of the Prancing Horse. Here’s what happened when the home of British racing turned Ferrari Red for the weekend!

As 2017 rolls on, so do the year-long Ferrari festivities which mark seven historic decades for the manufacturer. The Ferrari ‘World Tour,’ a series of racing spectacles at iconic circuits all across the globe, held its main European Corse Clienti event at the home British racing - Silverstone. 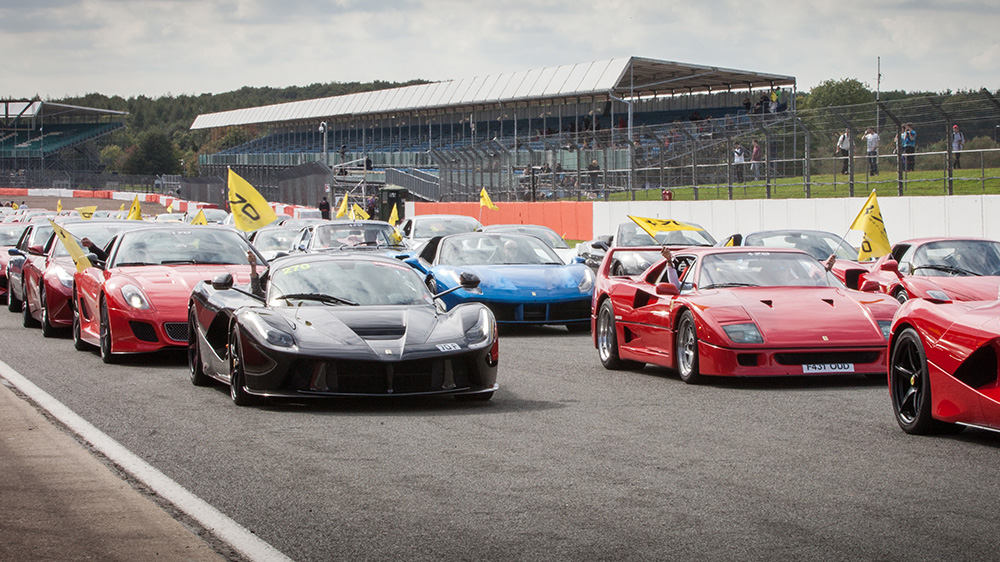 As 2017 rolls on, so do the year-long Ferrari festivities which mark seven historic decades for the manufacturer. The Ferrari ‘World Tour,’ a series of racing spectacles at iconic circuits all across the globe, held its main European Corse Clienti event at the home British racing - Silverstone.

Sponsored by Pirelli, and run on our GT racing P Zero, the packed schedule for the Ferrari Racing Days featured not one but two challenge series, the eagerly anticipated Silverstone debut of the FXX-K and the F1 Clienti.

The last of that list, but certainly in no way the least, features retired Scuderia Ferrari Formula One cars which have passed into private ownership. The record-breaking F2002, the single-seater in which Michael Schumacher drove to the world championship, returned to the Silverstone pit lane once more to serve as an iconic piece of Ferrari racing and engineering history.

Alongside many other famous pieces of Ferrari F1 history, a total of eighty cars took to the track at Silverstone over the weekend’s celebrations. Unlike the equally British Ferrari outings at both Danesfield House and Blenheim Palace, for the Ferrari Owners’ Club GB and Salon Privé respectively, the Ferrari Racing Days were a live and in-person demonstration of pure performance on the track.

The famous Ferrari Challenge is a one-make series which ensures close competition through impeccable standards set for the identical competing cars, which puts the emphasis in securing a competitive edge solely in the hands of the drivers. Our Trofeo Pirelli 458 class, taking yet another step in the direction of exclusivity in featuring only the Ferrari 458 Challenge Evoluzione, saw fierce competition as the drivers took to the grid with the title up for grabs.

This expression of Ferrari’s prestigious racing history of course in no way precluded a chance for fans to get up close with the entire road-going Ferrari range. In fact, it was displayed in its entirety.

Two stand out models from an entire sea of stunning supercars were the no-nonsense nominative heavyweight known as the 812 Superfast, featuring an engine with no fewer than 12 cylinders, and the LaFerrari Aperta.

Throughout Ferrari’s 70th Anniversary celebrations, the LaFerrari Aperta has served faithfully as somewhat of an icon. And, in videos and pictures let alone in person, it’s not difficult to see why the hypercar is a worthy representative.

But, there was another automotive marvel at Silverstone which turned heads during the Ferrari Racing Days. Making its debut at the home of British racing was the Ferrari FXX-K. Boasting some impressive statistics, such as an incredible 1050 hp supported by a HY-KERS system based on state-of-the-art  F1 technology, the FXX-K well and truly captured the imagination of the Ferrari fans at the track.

The XX Programmes are comprised of phenomenal cars produced in extremely limited numbers. Born for the track, the XX Programme cars were built under the mantra of a no limits, no compromise approach to attaining power and performance. Also on the track at Silverstone alongside thirteen of the debuting FXX-K were eleven 599XXs and three FXXs.

Supported by a team of Ferrari technicians and provided exceptional tutelage under Marc Gené and Davide Rigon, those who purchase these cars are also investing in an entire experience as a Scuderia Ferrari driver.

From beginning to end, the Ferrari Racing Days offered a rare opportunity to step into the undiluted world of Ferrari. Spanning seven decades of prestigious racing and manufacturing history, the environment at Silverstone was perfect for capturing the culmination of Ferrari’s efforts from the manufacturer’s inception to the modern day.

The rise of a supercar vlogger