Still owned by the same family, the superb award-winning Scat Landaulet-Limousine is a real gem of an old-timer that still retains the same components as when it was manufactured. Even the tyres are still those fitted in 1913

“A change of era and a change in philosophy”. When Simon Kidston, the renowned presenter of the Concorso d'Eleganza Villa d'Este, introduced the Scat 25/35 HP Landaulet-Limousine to the audience at Villa Erba, Cernobbio in May, he was in effect announcing a remarkable leap back into history, by 105 years to be precise. It was the first time that a best-preserved class had been introduced at the event - regarded as the world's number one vintage car competition - and this 1913 specimen sharply raised the average age of the competitors. But even more striking than the car’s year of manufacture is its  integrity: there is not one single part of the car produced by Società  Ceirano Automobili Torino that isn’t original. Also because the few, highly-refined restoration operations that have been done on it have been conservative in nature, of the same type as those performed on paintings and works of art. It’s no wonder that the “old-timer” won first prize in its category. And there’s more: FIVA, the Fédération Internationale des Véhicules Anciens - the highest international authority in the sector - gave it the “FIVA Best preserved vehicle award - Partner of UNESCO”. 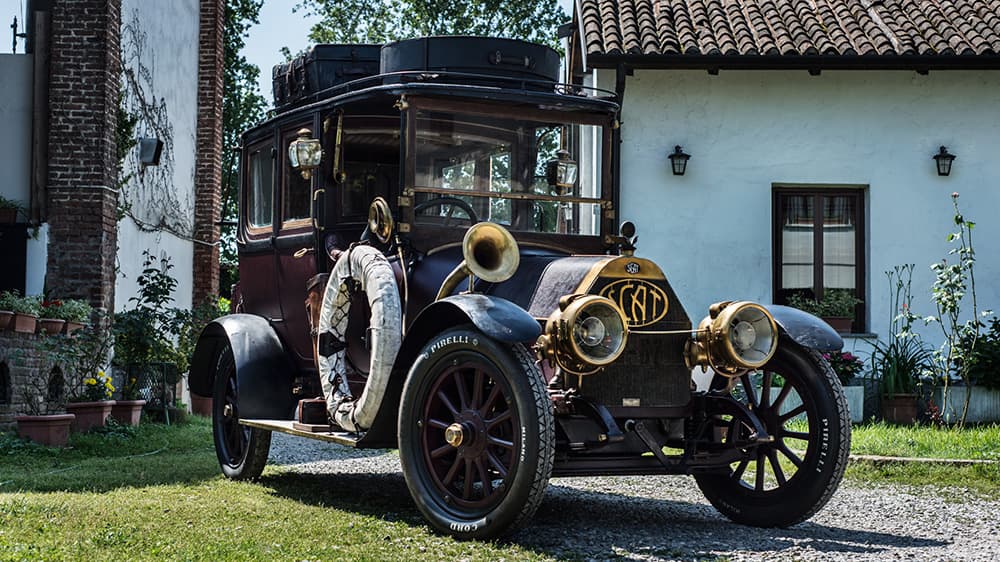 Mechanics, bodywork, interiors: in a rare photo from 1913 in the magazine “Motori Cicli e Sports” – the publication of which was requested by the manufacturer to advertise its stand at the Turin Motor Show – the 25/35 HP, unchanged as it is, can be recognised instantly. Even the two front tyres are original Pirellis from the 1920s.  In other words century-old tyres, fitted by the original owner in the aftermath of the First World War, that are still in superb condition.  And this despite the fact that the distances travelled by this large and luxurious touring car, with its 4-cylinder, 4,712 cc monobloc engine, were certainly not over smooth terrain. This is probably the reason why traditional wooden wheels, more suited to travelling in the countryside, were chosen instead of the new metal-spoked removable wheels that Scat was able to offer at the time.

All the vehicle’s details and optional extras are listed in the sales contract, which is kept together with the vehicle registration document. And this is not a short list in view of the fact that Scat, a company founded in 1906 by Giovanni Ceirano – one of the famous Italian brothers who were among the pioneers of the motor car – manufactured every single part of its very high-quality vehicles. During the same period the company was also able to boast of two consecutive victories at the Targa Florio, in 1911 and 1912.
This specimen of the 25/35 HP, which was the most powerful model in the road car range, was made to order - as was the custom in those days - for a Mr Francesco De Leonardis of Radicena.
The fact that it continued to be owned by his family for very many years partly explains its longevity, not just because it didn’t change hands but above all because at that time cars were checked over and polished by their chauffeurs every day.

We can deduce that the Scat 25/35 HP was registered in the province of Reggio Calabria from the number 53 on the registration plate, which identified the area in the 1910s, while the last two digits - 67 - indicate the progressive order of registration. Another factor in the car’s timeless charm is the fact that it has always remained within Italy and under cover, having been first acquired by the Museo Storico della Motorizzazione Militare in Rome and then by a collector who simply cleaned it and kept it in Tuscany for around a decade. Then, with its current owner, a process of renewed appreciation began that brought it to public attention, through Villa d’Este, as a precious testament to Italy’s historic motoring heritage. Corrado Lopresto, owner of one of the most prestigious and admired historic car collections on the planet – celebrated for its many, strictly Italian-made prototypes – gave the go-ahead in 2017 for the restoration of the Scat in collaboration with the art restorer Giulia Dilecce. A meticulous operation that exalted the uniqueness of such a rare jewel during which nothing was changed, remade or retreated. This is a find of “Automotive Archaeology”, to return to the Concorso on Lake Como, that comes to us straight from another century with its exclusive revolving running boards, its window winder casings lined in crochet work, its optional compressed air engine starter and its water level indicator in the St. Christopher above the radiator. “A change of era”, as we said. A completely different philosophy. With fabric passenger seats with embroidered edges.