The practical idea that a pneumatic tyre can let a vehicle drive on through a puncture has been around since the 1930s, when it grew out of military applications and innovations designed to improve the safety of  vehicles.

A provision to maintain the tyre’s pressure and allow it to continue operating after a relatively common occurrence like a blowout, avoids a potentially catastrophic outcome and lets the driver keep control of the vehicle, buying time to manage the situation without having to execute a possibly dangerous lane change to pull over to the side of the road.

Most run-flat tyres will usually run on for at least 50 miles at a reasonable speed, certainly long enough to organise a safe replacement in all but the most unusual situations.

Gaining momentum
As obvious – and obviously necessary – as the concept seems, however, it is only comparatively recently that run-flat has started to become part of the commercial mainstream. And while take-up numbers have been comparatively small as an overall percentage of total market share, the industry has seen run-flat sales moving upwards for cars and SUVs.

Like other tyre companies, Pirelli has been working on improvements to its offerings in this area, driven primarily by considerations of safety alongside the automakers’ push for fuel economies.

Run-flat – which uses reinforced sidewalls to support the weight of the vehicle – is just one option. There are also auxiliary-supported tyres, where a supporting metal ring inside the tyre picks up the weight if there is a loss of pressure. Meanwhile self-sealing tyres make use of a special compound lining which seals the tyre when it comes into contact with air. The compound fills up the hole left by the puncturing object and in this way holds back the air.

If you do get a puncture in a run-flat tyre you might not always notice immediately, particularly if you are driving on a long, straight road, since ride quality may not change significantly. For that reason, run-flat tyres always come with a tyre pressure monitoring system (TPMS), which detects and indicates when pressure has been lost. 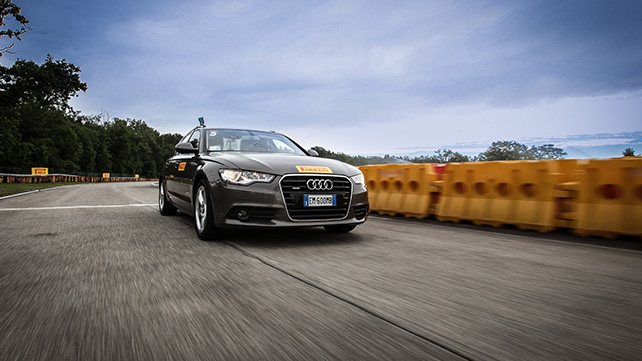 Consumer challenges
So with the potential advantages to the driver appearing considerable, why has the technology had such a bumpy road?

A report from JD Power just two years ago found drivers’ overall satisfaction with run-flats was declining amid complaints over the frequency with which the tyres had to be replaced – and the expense of replacing a full set.

Turning the corner
But Pirelli believes the corner is being turned in customer attitudes to the tyres. Certainly among drivers of luxury vehicles, any such uncertainties seem to be in the rear-view mirror. Meanwhile, the industry in general appears to remain optimistic for the future of the technology.

The importance of safety is becoming an even greater consideration

Pirelli has been working closely on specific requirements with automakers like BMW, which is the world’s largest fitter of run-flats as original equipment.

The perceptions are changing, and the importance of safety is becoming an even greater consideration. Drivers are asking ‘how can I drive my loved ones safely and efficiently in a way where the performance of my tyres matches the high performance of the rest of my vehicle?’

Safety first
Of course there’s a matter of cost to be considered, because a tyre made with these technologies has a different manufacturing cost compared to a standard one. But there’s an important matter of mobility because in an unforeseen situation, it takes the worry out of the customer’s head.”

But Pirelli’s research in this area is helping create a better – and safer – driving experience.

* There is a Pirelli FAQ on run-flat tyres here, where you can find out how the technology can benefit you, according to the specific make of car you drive.

The Tyre with a Mechanic Inside

Cinturato All Season: the worry-free tyres

Find your dealer >
What car do you drive?
​Set your car detail and discover the size range...
Fit on your car >
Performance, safety, peace of mind
​Run Flat tires mean safety. They provide greater control of your car in emergency conditions...
Run flat technology >