So, you think you know what a Porsche guru looks like? Think again...

The American dream
It’s fair to say that Magnus Walker isn’t your typical Porsche aficionado, if indeed there is such a thing as a typical Porsche aficionado. With his incredible beard, unkempt dreadlocks and truck driver cap, he looks more like a member of a heavy metal band or a committed biker.
But don’t be fooled by appearances. Magnus is not only a world-renowned Porsche fan, collector and preparation expert, but also a hugely successful fashion designer and property developer. There are very few things he can’t do and his down to earth appeal has won him a huge number of fans the world over. Especially wherever you find Porsches.
His accent is hard to place: he grew up in Sheffield in England, but went to seek his fortune in America from an early age, winding up on a park bench in Los Angeles in 1987 without a dime in his pocket. All he had was passion and ambition. “My life changed in 1977,” he said. “My dad took me to see the London Motor Show and there was this Martini-striped Porsche in there. That was it. That’s how it all started for me with the Porsche 911. And Porsche has been my family ever since.”
It’s a family that’s constantly expanding, as Magnus’s Urban Outlaw gatherings attract massive crowds of people who love cars, but aren’t afraid to be a bit alternative at the same time. 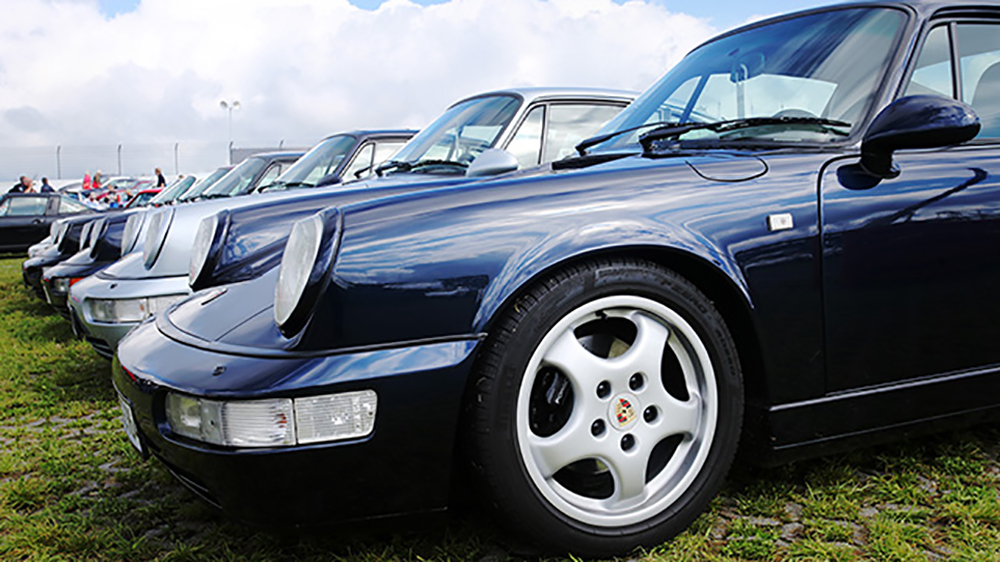 Porsche and Pirelli
Magnus has around 25 Porsches of his own, with a number of them running on Pirelli tyres, in a variety of sizes. “I love the Trofeo R tyre in particular,” says Magnus. “That’s a really sweet tyre and it brings out the best in my GT3 in particular. But it’s also good in the smaller sizes. Like Pirelli says, power is nothing without control: I couldn’t agree with that more.”
Magnus visited the Pirelli stand at the Oldtimer Grand Prix in Germany recently, looking at some of the Pirelli Collezione tyres that have been created for classic Porsches. “I’m going to have to get some of those on my cars,” he says. “All I ever drive is a Porsche, so it’s great to see tyres that have been specifically made for these cars.”
His obsession with Porsche meant that at one point Magnus was doing around 50 track days a year in addition to running his fashion business, but then he cut down on racing to turn his attention to amassing a collection of 911s in various states of repair. Shortly afterwards, he met a film director, Tamir Moscovici, who was also a Porsche nut, and they made a cult short film together called ‘Urban Outlaw’ in 2012. A star was born.
You can watch the film here: https://www.youtube.com/watch?v=ZZlRFsRG6K0

Magnus makes his mark
“Things blew up after that film; it opened my collection to the whole world,” said Walker. “Within two weeks, I had a call from Jay Leno to be on his show, and my phone and email never stopped.”
Magnus’s Porsches are a bit…different. He’s not afraid to modify a 911 to suit his tastes, with some signature touches such as louvred bonnets and bumpers. Perhaps his favourite modified Porsche, which sits in his warehouse garage in Los Angeles, boasts a striking blue and red colour scheme as a tribute to one of his heroes, American stunt rider Evel Knievel.
The purists may disapprove, but if you’re an urban outlaw, there’s no right or wrong. And now he has a queue of people of lining up to get one of his cars. An ‘ex-Magnus Walker’ Porsche actually means something.
It’s pretty much the same approach that he’s taken to clothing: he made his fortune by selling second hand clothes on Venice Beach that he had personalised to stamp his own mark on them. That unique idea turned into a hugely successful business – and then a Porsche legend.

Love for the four wheels took the Porsche brand ambassador to collect always new vehicles and became a specialist and technician of these special sports cars.

Most of the models collected belong to the 911 series. His “Porsche career” experience started when he began to participate events and races dedicated to this car, after joining the Porsche Club of America.

Being so enthusiastic about Porsche cars, he quit driving all other types of cars and dedicates himself only to these models, leaving also his famous fashion industry business. He now owns almost 40 personalized Porsches and every model from 911 series, from 1964 to 1973.  With them he races all around the Americas and spends lots of time personalizing and renovating them.

The Jaguar roars once more

How to Host Salon Privé