Pirelli goes hand in hand with ultra-high performance, so sponsorship of Porsche’s classic restoration competition in the United Kingdom is as perfect a fit as the P Zero tyres that the newly restored cars are finished with

This year’s competition focussed on front-engined ‘transaxle’ Porsches, with the challenge for dealers being to find and restore an example of these cars that are maybe not immediately synonymous with Porsche: a marque that will be forever associated with the iconic rear-engined 911 (for which Pirelli is still an original equipment provider).

The winner of this year’s competition, which was judged at the Silverstone Classic motorsport festival last month, was Porsche Centre Guildford – which chose to restore a 968 Club Sport from 1994. The 968 Club Sport is well known among aficionados for its perfectly balanced handling and keen performance, but it’s becoming increasingly difficult to find a good one as they are all close to 25 years old. At the same time, values are rising (with only 1923 examples made from 1992 to 1995) which makes the model ripe for sympathetic restoration.
This was the objective that Porsche Guildford had in mind, in partnership with their Porsche Recommended Repairer, Premier Panel Skills.

The first task was to source a car, which was in a sorry state when it arrived. Even the Guards Red paintwork (one of only five factory colours originally offered for the 968 Club Sport) was looking more like Guards Pink. This particular car was actually already known to Porsche Guildford, as they had worked on it more than 10 years previously before the owner – who drove his car enthusiastically on epic circuits such as Spa and the Nurburgring – sadly died, and his pride and joy subsequently fell into disuse. How it looks now is a real tribute to him. 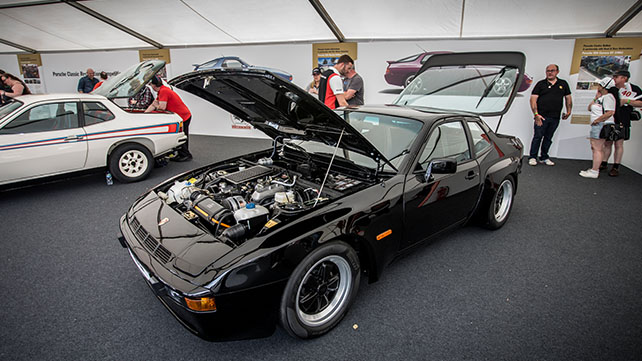 Having arrived in the workshop, the bodywork was first sandblasted back to the original metal, so that repairs to the extensive corrosion could be carried out before a full respray was completed.

At the same time, the 3.0-litre engine was removed and entirely stripped so that it could be rebuilt with original or replica parts: many of which are now quite rare. The result of this careful fettling was the Porsche recovering all of its original 245 horsepower.  Also removed were the gearbox, steering rack, suspension, and exhaust. Such was the extent of the rot that the suspension bolts had to be sawn off. All parts that could be were reconditioned and repainted; otherwise they were replaced.

While getting the mechanical parts working again was perhaps the most difficult part of the restoration, the judging panel had to base their (tough) decision on how the car looked as a whole.

The moment of truth was when the engine and mechanicals were reinstalled in the body and everything was connected up again. In the meantime, the interior had also been completely reupholstered. Making sure that everything matches up and works is the biggest hurdle in any restoration, while at the same time ensuring that the car maintains originality.

In this case, the finished 968 CS was actually better than original, which is why Porsche Guildford and Premier Panel Skills were declared the winners of the nationwide competition. And part of what gives this 968 such a special feeling both on the road and track is the fresh Pirelli P Zero N-Rated rubber now fitted at the end of each beautifully restored axle.

About 70 per cent of all Porsche models ever built are still in a roadworthy condition even today. In order to serve the need for suitable tyres, Porsche along with Pirelli has newly developed, tested and approved numerous tyres that were originally matched to different generations of Porsche vehicles. When it comes to the look and design of the tread, the redevelopments are equal to the historic originals. But under the skin, it is all about modern tyre technology. In total, there are 32 new tyre recommendations available for a wide range of classic Porsche models. All these new classic tyres are marked with the N certification on the tyre wall which designates them as tyres homologated by Porsche.

Adam Flint, Centre Principal of Porsche Guildford, concluded: “The transformation from the condition it was in when found has been a truly fascinating journey, and this 968 Club Sport is once again a stunning Porsche. A huge congratulations to all our staff and Premier Panel Skills for this phenomenal achievement.”

Sponsoring this nationally acclaimed competition, which always delivers such stunning results, is just one way that Pirelli UK reinforces its links with some of the most sporting and prestigious automotive brands operating in the country.