Here is the report of the day won by the two winners of Vizzola #ChasingTheCal: emotions with high technological level!

Take two guys who win a gala evening in London for the launch of the Pirelli Calendar. Lucky, right? Take the same two guys, and imagine that earlier that same day they also got to mess around in a Lamborghini, at a fully equipped professional test track, namely the Pirelli circuit at Vizzola. Lucky squared, you're thinking. In fact, you're probably thinking okay, well done them for coming first in the #ChasingTheCal competition, but if that’s the prize, then they’re a little bit lucky too. "It's not fair!" you're thinking.

Except... Except that’s exactly what happened. And while other articles on this website describe the gala event and the competition, this one is all about what happened at Vizzola on 27 November. The stars of our story are those two guys (although it could have been you, and maybe one day it will be), along with a Pirelli Edition Lamborghini Aventador and a set of Pirelli P Zero tyres, the Lambo's inseparable companions.
But first things first. Let's introduce them one by one. The two winners of the competition are Andrew, a retail property consultant, and Antonio, a recently graduated mechanical engineer. Add to them Marco Mapelli, a professional test driver for Pirelli. The car is a Pirelli Edition Lamborghini Aventador: 700 horsepower of pure Italian muscle, transmitted to the ground highly effectively through Pirelli P Zero tyres. A beautiful sunny day. So they were lucky with the weather too, because at the end of November you don’t always see clear skies over Vizzola. And finally, an artificially wet track, because that’s what Vizzola is: one of the most important and best equipped circuits for tests on wet roads.

Time to get started. Marco is up first. Who will win? Aquaplaning or the grip of the Pirelli tyres?

Marco kicks off, offering advice on how to handle the various tests properly. From braking on dry asphalt to the more delicate trick of doing so on wet surfaces of various kinds, right through to simulating the almost zero grip of ice and the "disturbing" experience of aquaplaning: a phenomenon where at a certain speed, due to the depth and length of the surface water, the car loses contact with the road and "sails" on the water.
Now it's time to see how our two lucky winners fare. By the first test, the adrenaline is already rushing, and added to that is excitement and fear of failure, worse than for any exam at school. The track is constantly moistened by the forced irrigation equipment, and they can feel the humidity inside them too. Driving this Lambo gives you sweaty hands, although certainly not from the physical effort involved.
But the most unforgettable experience for Anthony and Andrew was not that of taming the Aventador, which in line with Lamborghini tradition takes its name from a fighting bull, but that of doing a few laps in the passenger seat next to Marco Mapelli. The test driver showed them the incredible possibilities offered to a professional driver by the combination of Lamborghini and Pirelli in conditions as challenging as the wet track at Vizzola.
Before these laps of the track, they had no idea that with just a light pressure on the accelerator and a skilled twist of the steering wheel, it would be possible to master Vizzola's curves at high speed in controlled skids, with the nose of the car heading straight for the inside curb, and only the driver's prowess preventing the tail from going into a spin.
A feat made possible by the skill of the driver, of course, but supported by the perfect responsiveness of the car and the precision of the Pirelli tyres. Because Lamborghini cars only fit Pirelli tires, like the P Zero of the Pirelli Edition Aventador, which after blowing our two guys awat on the track then took them to the red carpet at London's legendary Roundhouse.

A powerful car? Highly dynamic footwear. It’s the only way to survive on the track

Thanks to the dynamic behavior of the P Zero, the two winners were able to experience almost all of the car's characteristics, from the excellent grip in the wet to the surprisingly comfortable ride, despite the abundant power of the engine and the inevitable rigidity of the set-up. In fact, the main feature of the P Zero is that it guarantees optimum performance in both dry and wet conditions, throughout its life cycle, combining sportiness and comfort. In the compounds of the tread and heel, the part of the tyre that grips the wheel rim, the P Zero takes advantage of special nano-composites that ensure a comfortable ride combined with a sporty performance. Thanks to the special tread compound, optimum performance is even guaranteed from a cold start, in other words during the first few kilometres of a trip.
The tyre's innovative tread pattern also makes it possible to obtain maximum grip in the wet, as our two guys experienced first hand, and to improve acoustic comfort, while the DA.Co (Dynamic Asymmetric Contour) asymmetrical profile ensures uniform wear, with a footprint on the ground that remains the same at any speed. Moreover, the P Zero was designed with the utmost respect for the environment, as the compounds used contain no aromatic oils. Pirelli's decision in 2007 came three years before the European directive regulating this issue, which came into force only in 2010, and goes beyond the strictest parameters in the ultra-high performance (UHP) segment. 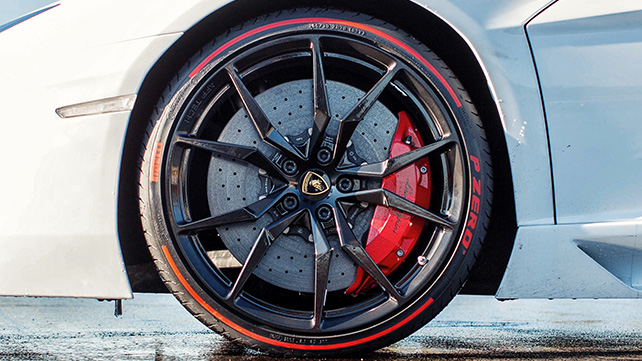 Thanks to the Hy.Co (Hybrid Cord) system, the structure makes it possible to limit the deformation of the tyre profile up to very high speeds of 370 km/hour, higher than the maximum speed of the cars for which it is designed, thereby increasing the life of the tyre and consistency of performance throughout its life. The P Zero is also innovative in mileage, not only in terms of overall duration, but also in terms of uniform performance throughout the life of the tyre.

The thrill of counter-steering around Vizzola's long corners more than compensated for not being able to experience the Pirelli Edition Lamborghini Aventador's maximum speed of 350 km/h, but what remains etched in the minds of our two guys is not only its burning acceleration (0 to 100 in 2.9 seconds), but also its excellent braking, in both wet and dry conditions, feeling their chest held back by the seat belt and their whole body pushing forward. Thanks not only to the powerful brakes, with their six-piston calipers at the front and four-piston calipers at the rear, but also to the grip afforded by the P Zero 255/35 ZR19 at the front and the 335/30 ZR20 at the rear.

Pirelli Calendar Gala Dinner:
you could be there

Beauty in the eyes
of Roberto Bolle