Over the past 30 years an incredible array of supercars has been launched at the Geneva Motor Show, shod with Pirelli’s custom-made P Zero tyres. Here’s a look at how the evolution of Pirelli’s performance tyres is intertwined with this prestigious exhibition

Home road The talk of Geneva

Since its first appearance at the Geneva Motor Show – in 1989, on the wheels of an Alfa Romeo Sprint Zagato known as Il Mostro (the Monster) – Pirelli’s P Zero has become the tyre of choice for the world’s leading supercars.

From the Lamborghini Diablo to the Pagani Huayra, legendary cars launched at what is considered to be the most prestigious and important motor show in Europe – if not, the world – have been shod with P Zero tyres, tailor made in tandem with the car itself so as to achieve the highest possible levels of performance.

Last year’s show was testimony to the power of the P Zero and the continually evolving technology behind it, with some 60 per cent of the premium and prestige cars on display fitted with these Pirelli tyres. 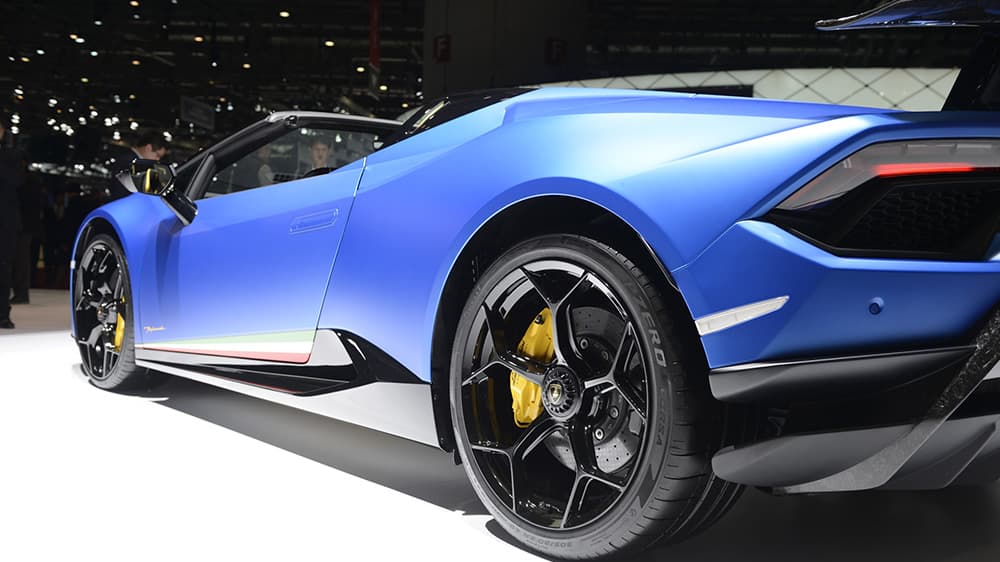 Three decades of excellence
Originally intended specifically for luxury sports cars, P Zero tyres have, right from the start, been perfectly at home at the Geneva event, where many of the most hotly anticipated cars make their public debuts. As such the evolution of Pirelli’s excellence in performance tyres is intertwined with the history of supercars presented at Geneva over the past 30 years.

In fact the P Zero first saw the light of day in 1987 – two years before its Geneva debut – when it was created to meet the performance needs of the stellar Ferrari F40. The supercar was created in celebration of Ferrari’s 40th anniversary and was granted the honour of becoming history’s first “P Zero car”, but the list of P Zero cars since is so long that it’s best to focus for now on those that have gone on to become true legends. One of the very first cars to wear these tyres was another name that has gone down in Italian automotive history, the 25th Anniversary Lamborghini Countach, created in 1988 to celebrate Lamborghini’s milestone birthday.

Then comes that first Geneva Motor Show appearance in 1989, when Pirelli P Zeros adorned the Alfa Romeo Sprint Zagato (SZ), created out of a partnership between Centro Stile Zagato, Fiat and Alfa Romeo. This car, mounted with 205/55 ZR 16 tyres on the front and 225/50 ZR 16 tyres on the rear, was able to sustain forces of more than 1.1 g in curves. Indeed some true Alfa enthusiasts apparently posted forces of up to 1.4 g. The SZ was a truly remarkable vehicle, featuring a 3.0-litre (2,959cc), 12V V6 engine capable of generating 210hp at 6,200rpm and torque of 245Nm at 4,500rpm.

The following year, P Zero appeared at the Geneva Motor Show on the Lamborghini Diablo, thereby sealing a historic partnership between the two Italian firms that started in 1963 and continues to this day. Designed by Marcello Gandini, the Lamborghini two-seater was equipped with cutting-edge P Zero tyres with a unidirectional, asymmetric tread pattern able to achieve the highest levels of performance (more than 490hp and 580Nm of torque, 0-100km/h in just 4.09 seconds and with a top speed of 328km/h).

Elite partners
Of course, Pirelli P Zeros were not limited to Italian cars. A great many other countries’ manufacturers have shown huge appreciation for both the tyres’ performance and the tailor-made approach to tyre design, which has enabled the company, over time, to gain nearly 50 per cent of the luxury sports-car market. Over the years, a great many innovations have been introduced, from Kevlar to next-generation polymers for tyre compounds, and let’s not forget the advanced P Zero System featuring directional and asymmetric tread patterns to increase braking efficiency in the wet. All this has enabled Pirelli to build relationships with elite manufacturers such as Porsche and Swiss car tuner Rinspeed, which presented a special version of the 911 Turbo at the 1991 Geneva show, marking the debut of the 19-inch P Zero tyre.

Over the years, a great many innovations have been introduced, from Kevlar to next-generation polymers for tyre compounds

In 2003, P Zeros made a fitting return to Ferrari on the road version of the Ferrari 360 Challenge, a jewel of engineering able to put out 425hp and derived directly from the world of one-make racing and FIA championships. The 360 Challenge was presented at the Geneva Motor Show sporting the new P Zero Corsa System tyre, the updated 2010 version of which remains the top of the line in sports tyres for Pirelli. It is a tyre that ensures excellent levels of both safety and performance even on normal roads, enhanced in 2010 by a collaboration with Lamborghini. But before this, Lamborghini had also come up with a few other engineering masterpieces, such as the Gallardo and the great Murciélago LP640, presented at the Geneva show in 2006, both of them mounted with P Zero Rosso tyres.

The following year saw the new BMW M5 E60 appear at the Geneva show, a car derived from the already remarkable 5-Series. It was a historic achievement given that it was the first time a V10 engine was mounted in a BMW production car. With the help of its P Zero tyres, the M5 could do 0-100km/h in just 4.5 seconds – and only its electronic speed limiter kept this fireball from exceeding a top speed of 250km/h.

This long history of thrills and fast cars continued into 2007 with the release of a new generation of the Pirelli P Zero line. The 2011 motor show took the tyres to new heights thanks to a true masterpiece of car design by Horacio Pagani, the Pagani Huayra, which can count on a specific range of P Zero Corsa, designed for this Argentine executive’s “dream car”.

Favoured brand
At the Geneva Motor Show, 2013 was a particularly potent year for supercars and Pirelli’s P Zero tyres. Two names sum up the excitement: LaFerrari and the McLaren P1. Both of these hyper cars, one Italian, one British, were wearing P Zeros. At 963hp and 916hp, respectively, technological precision for the tyres – the sole interface between car and road – was no longer just a matter of the need for speed; it was now truly a technical requirement. In 2014 came the Maserati Quattroporte, which made its European debut at the Swiss auto show sporting Pirelli’s high-performance tyres. Then in 2015 came the brand-new Ferrari 488 GTB, customised with its own Pirelli P Zero tyres designed specifically to flatter all of the car’s best features.

The current generation of P Zero tyres was unveiled in 2016. This was the latest stage in the evolution of the iconic tyre, which was just about to enter its 30th year. It was also the first edition of the Geneva Motor Show to experience concrete talk of electric supercars, including the Rimac Concept One. The Croatian company immediately turned to Pirelli to fit the tyres for its ultra high-performance and environmentally friendly car. As for cars with conventional engines, there were the new Ferrari GTC4Lusso, Lamborghini Centenario, McLaren 570GT, Jaguar F-Type SVR and Pagani Huayra BC – all fitted with custom-made Pirelli P Zero tyres.

The following year saw colour make its first appearance. Tyres had always been round and black, but their look was transformed at Geneva 2017 with the Pirelli Color Edition. It was a genuine revolution of colour that brought personalisation – essential in the prestige segment – and a new level of exclusivity. Right from the start, car manufacturers with the greatest vision and attention to the needs of the market took this opportunity to fit the tyres to their top-of-the-range cars.

Tyres had always been round and black, but their look was transformed at Geneva 2017 with the Pirelli Color Edition

Geneva 2018 brought definitive confirmation of Pirelli as the favoured brand among premium and prestige car manufacturers: some 60 per cent of the cars on display from these segments were fitted with Pirelli tyres. These included the new Lamborghini Urus that – fitted with four specially made P Zero Corsa tyres – saw the creation of a brand new segment: the super SUV.

And these are just a few of the cars that have adopted P Zero tyres during the past 30 years of the Geneva Motor Show – a tradition that promises to continue for a very long time.

Tyres on the track:
5 tips for the most fun