Pirelli-Maserati: a partnership as long as the road leading from Paris to Modena

This year too, the P lunga partners up with Maserati in the “Paris-Modena” cycling marathon: the tour includes 5 legs and it pools together amateur cyclists, former professional cyclists and VIPs all for a common aim: for charity

Home road Pirelli-Maserati: a partnership as long as the road leading from Paris to Modena

Pirelli-Maserati: a partnership as long as the road leading from Paris to Modena
Show more images 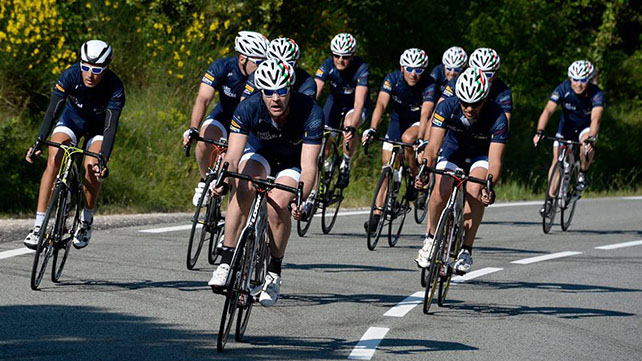 “The car is not just any old piece of iron, but a live creature with a beating heart, which feels, which is well or unwell depending on how you treat it. If you want it to give you everything you ask of it on the road, you need to know it in-depth and help it express its personality”. These are the words of Juan Manuel Fangio, who won an impressive amount of Grand Prix races in his Maserati 250F with Pirelli tyres, including the World Championship Title in 1957, and they fully portray the spirit of intense collaboration which has tied the P lunga and the Trident for over a century. This partnership is not merely limited to motor racing, nor to standard production alone, but - for the last three years - it also extends to cycling.

Yes because, for the third year running, Pirelli is sponsoring the "Paris-Modena", a special cycling marathon organised by Maserati which pools together amateur cyclists, former professional cyclists and VIPs all for a common aim: for charity. Indeed, participation in this event has philanthropic purposes: the funds raised with the participation fees and sponsorships will go to the Rêves association, which tries to make the dreams of seriously ill children come true.

Starting off in Paris on 4th June, this adventure crosses France, across the Alps and reaching Modena five days later, snaking along a route that includes the Paul Ricard circuit, Monaco, Mugello Circuit and Florence.

Along the more than 1,000 km-long stretch, cyclists will obviously be "escorted" by Maseratis fitted with Pirelli tyres. Pirelli tyres are fitted on all cars made by the Trident. The roots of the technological partnership between the two companies which symbolise the Italian automotive industry do, in fact, run deep and they date back to the years in which the tyres were called Pirelli Stella Bianca and, during the initial decades of last Century, accompanied the 8-cylinder Maserati belonging to Giuseppe Campari in his French Grand Prix victory (1933). That glorious era lasted for more than thirty years, those which coincide with the profound evolution of tyres towards the radial model. These years were followed by a series of wins by Villoresi and Farina, and while the Pirelli Stelvio won the title of "the tyre of victories" with the Stella Bianca, Fangio's star began to shine in the Italian Grand Prix in 1953.

The close partnership on the circuit between Maserati and Pirelli couldn't fail to have repercussions on the standard production which, for the Bicocca-based Company, was revolutionised starting in the 1960s, with the introduction of the new Cinturato (Belted tyre). In the year 1961, the Maserati 3500 GT Spyder and Coupé models were equipped with the Cinturato S tyre, which was destined to evolve into the HS-High Speed version in 1963, with the arrival of the Maserati 5000. Indeed, the 205 VR 15 size, which was introduced on the Maserati 5000, went on to be fitted on the entire range produced by the Trident over the course of the 1960s, from the 4000 Coupé and Spyder models, to the Sebring, the Quattroporte, and also the 4700 Mexico. The arrival of the fabulous Ghibli, as the 1970s were drawing near, led to the introduction of the first sizes of the lowered Serie 70. The reference Cinturato tyre had the acronym CN72, and was also referred to as “the American”.

The P Lunga and the Trident came together again many years later, at the end of a long period of change. At the beginning of the new Millennium, the reference Pirelli model was called the P Zero, and it went on to become “the tyre of victories” like its great predecessors, mid-way between the track and the road. In 2002 the Pirelli P Zero was given the task of taking the Trident back to the track, giving rise to the Maserati Trophy which involved the new and powerful Coupé and Spyder, models which re-ignited the sporting passion at the heart of the very DNA of the Modena-based Company all over the world.  2003 was the year of project MC12: a twelve-cylinder car destined for victory, in the mid-noughties, in the FIA-Gt Championship. Its tyres were naturally and exclusively the Pirelli P Zero.

The last pieces to fit in this century-long partnership puzzle are named Quattroporte, Ghibli and Levante (the first ever Maserati SUV). The most recent models from the House of the Trident are, obviously, fitted with Pirelli tyres but unlike their namesakes from the past, they sport bespoke P Zero tyres, which are distinguished by the special marking on the side of the tyre, MGT, which indicates their uniqueness and the perfect match with the characteristics and requirements of the Modena-based Company.

Pirelli tyres are increasingly contributing towards giving cars a unique and inimitable personality and, as Fangio used to say, "the car is not just any old piece of iron, but a live creature with a beating heart.....", in the spirit of a partnership as long as the road leading from Paris to Modena!

When the "Perfect fit" strategy
started with the Miura

Stefania Rocca and
the art of valuing time