Inside the inaugural Pirelli ‘Prestige and Performance’ Competition, where the iconic cars were judged by an expert team

Blenheim Palace, located in rural Oxfordshire in England, took 28 years to build. Once completed, it was one of the largest stately homes in Britain and the Duke of Marlborough lived there with his family.

That’s a lineage that continues to this day, 300 years later, with the current Duke of Marlborough continuing to call Blenheim home. The Palace, the birthplace of Sir Winston Churchill, is now a UNESCO World Heritage site. So rich is its history and architectural splendour that people travel from around the world to see its grand interiors and to walk its beautiful gardens.

The South Lawn was the venue of the exclusive Salon Privé motoring event in September. Some of the finest classic cars from some of the greatest private collections in the world were lined up. Guests and collectors, buyers and enthusiasts mingled as they sipped champagne amongst the automotive works of art.

The title of ‘Best in Show’ for the Salon Privé Concours d’Elegance element went to a 1952 Jaguar XK120. The jet-black car with its bubble windscreen and long flanks caught the judges’ attention. The more modern David Brown Speedback turned many heads and attracted admiring glances from those privileged to be present.

The highlight of the weekend was the inaugural Pirelli ‘Prestige and Performance’ Competition, where the iconic cars were judged by an expert team. Racing driver Tiff Needell, of Fifth Gear fame, teamed up with his co-presenter Vicki Butler-Henderson to choose which car most deserved the awards. Joining them on the judging team was Matteo Barbieri, who heads up Pirelli’s international commercial focus on prestige and has an in-depth knowledge of prestige vehicles.

With around 80 privately-owned cars on display from manufacturers such as Audi, BMW, Bugatti, Ferrari, Lamborghini, Maserati, Pagani and Porsche, the judges had a difficult task in selecting their winners.

However, with their experience, the judges knew how to be thorough. Their task was made particularly difficult as the cars displayed were both aesthetically beautiful and technically state-of-the-art: exactly as is the case with the P Zero tyres that enhance the performance of the world’s leading supercars. Both feature iconic design matched with unparalleled technical know-how. 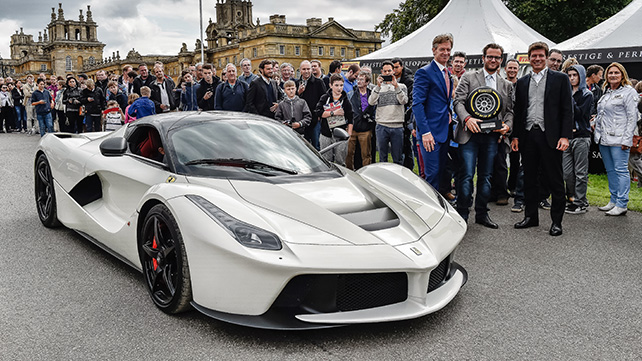 The overall Pirelli Award went to the Ferrari LaFerrari. There were numerous other categories too and the judges awarded the following prizes: