Drawing on an unparalleled line-up  of global automotive heavy hitters and 60,000* buyers, SEMA has a legendary reputation in the automotive industry. Celebrating its 50th anniversary this year, the show continues to connect the industry’s best for the first week of November against the stunning backdrop of the Las Vegas strip. SEMA, short for the Specialty Equipment Market Association, says in its mission statement that it aims to help its members - the producers and marketers of specialty-equipment products and services for the automotive aftermarket - succeed and grow.

The show brings together all automotive industry branches, including manufacturers, retailers, distributors, restorers, modifiers and enthusiasts. The association’s close ties to the glamorous racing industry and automotive media are also notable. During the four days of the show, all of these personalities converge on the Las Vegas Convention Center in a sort of yearly reunion.  But the action does not just happen there - the whole city comes alive with a host of luxe parties and events that bring out the true “who’s who” of the industry.  In short, for anyone involved in anything automotive, SEMA is the place to be.

And, for the more than 10 years, Pirelli has been there!  As a mainstay in the show’s Global Tire Expo, the brand has been part of the action, becoming a well-known go-to brand for the hottest cars and best customizers. In the late 2000’s, in particular, Pirelli established itself as a key player in the tuning market by introducing exclusive highly-sought after sizes within its P Zero Nero line that were fully embraced by the community and appeared frequently on the most eye-catching customs. Pirelli has also used SEMA as a platform to launch several of its key North American replacement line products, such as the Scorpion Verde All Season Plus, Cinturato P7 All Season Plus and P Zero All Season Plus, to name a few. In a climate geared towards the newest and most exciting automotive products, the opportunity that the show presents to showcase the brand within the United States market is truly unparalleled. 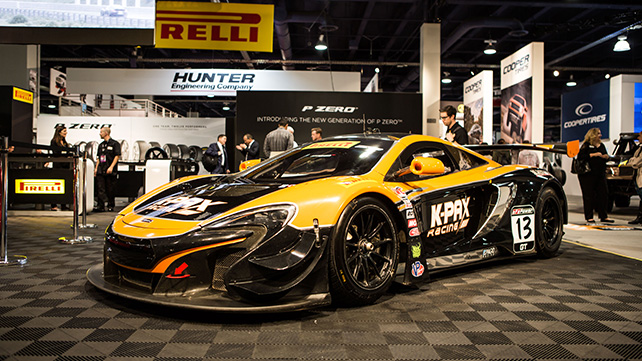 Not only does the show focus on product, but also the expression of the exhibited brands, an exercise at which Pirelli excels. With slick advertising and well-told story lines, Pirelli presents itself to the automotive world in a platform built on creativity, metal, and, of course, rubber. In previous years the Pirelli booth has been home to breath-taking custom cars from automotive icons such as Chip Foose, and a wide range of impressive modified cars from Pagani, Lamborghini, Ferrari, Bentley, McLaren and others. In a nod to its racing heritage, motorsports cars have also always had a parking spot in the Pirelli booth, including those from Pirelli World Challenge, Lamborghini Super Trofeo and others. Moving seamlessly with a mixture of brand initiatives and working together with key tastemakers, Pirelli makes the brand experience come alive at SEMA.

Starting in 2015, the Pirelli booth found a new home in “pole position” at the front of the Las Vegas Convention Center’s South Hall entrance.  Moving front and center raises the stakes and, with that in mind, in 2016 the Pirelli booth transforms itself into an homage to the company’s halo product – the P Zero. Introducing the new P Zero to the North American market in Las Vegas in the weekend just prior to the show, SEMA week 2016 also starts with a press conference celebrating the product.  The Pirelli booth, in an effort to expand the P Zero story, is carefully curated with cars showcasing the breadth of the entire product family, displaying a selection of impressive vehicles to match.

Drawing a parallel between street and track, the display will house both a McLaren 570S road car, wearing the New P Zero and also a McLaren 650S, Flying Lizard, Pirelli World Challenge race car on P Zero racing slicks. Together they weave a story of Pirelli prestige and its overlap with the racing world - transforming technology on the way from track to street and reinforcing the brand’s connection to top OEM manufacturers.  For the two Porsche’s in the booth, the story connection is a different one – between vintage and new.  Pirelli World Challenge driver Patrick Long offered his gorgeous 1973 911 with Pirelli’s CN36 tires to act as a contrast to our Vorsteiner Porsche 911 GT3RS with P Zero Trofeo R tires.  Together they show a connection between two iconic brands, Pirelli and Porsche, that showcases the longevity of their relationship and its evolution.  Finally, on P Zero tires, we have the La Ferrari, one of the rarest and most sought after cars in recent years. There could be no better expression of P Zero’s level of prestige.

At SEMA, bringing together the industry for both business and pleasure, brands have the opportunity to bring their latest, greatest and newest to the automotive world during one week in Las Vegas.  For Pirelli, SEMA is not only a tradition, but an exercise in visual storytelling that evolves along with the brand, bringing something fresh to the show year after year.