The Zonda is twenty years old but its history has distant origins, written by famous names. Pirelli, Monza, Horacio Pagani and Juan Manuel Fangio: united through a common love of speed and passion

Its origins are based on the name of a wind, “el Zonda”: an Argentinian jetstream capable of reaching 120 km/h. Then it became the legendary car, but a very much faster one in its most extreme version, which succeeded in nudging 380 km/h. The Zonda was the first creation by Horacio Pagani, an Argentinian like the wind, and by his firm Pagani Automobili, a small company founded in Modena, the home of the supercar, which was able to achieve world-wide renown.

THE BEGINNING OF THE STORY: FANGIO AND THE PIRELLI CINTURATO BELTED TYRES
The Zonda was created from the dream of a young boy who used to add colour to the sides of his father’s tyres, by highlighting in crayon the script of “Cinturato” featured on the sides: just a game, which was able to act as a forerunner of what was to become the Color Edition by Pirelli, which was designed to honour its favoured driver, Juan Manuel Fangio, who used to race and win using Pirelli Cinturato belted tyres. This was the very same driver who exactly 70 years ago conquered the Monza Autodrome circuit for the first time, beating Alberto Ascari who was the king of Monza at that time and Fangio’s eternal rival. And it is that “F” alongside the name of Zonda – the brand which characterises the most famous of the Modena supercars – which actually keeps alive that childhood memory and that love for Fangio.

THE DEBUT OF THE FIRST ZONDA
March 1999, Geneva Motor Show. Exactly twenty years have passed since among the exhibitors at the show people discovered this new name as the firm unveiled its first car. A supercar inspired by the sports prototypes of the Nineties, powered by a naturally aspirated V12 engine built by Mercedes-AMG and mounted at the rear. The style was a mixture of classical and innovative lines, generating something completely new and capable of attracting the attention of the visitors to the Swiss exhibition. The materials from which this new car was made are even today the most noble in the automotive world, and their masterly usage allowed the reading on the weighing machine to come in much lower than for all its competitors. All without forgoing a gram of security, the critical element for the conception of a supercar which Horacio has always held dear. Prizes, newspaper headlines and orders from new customers: in a single day of March, Pagani Automobili became a solid reality. After having been the dream of a child who for decades had cultivated his personal vision of elegance, technical prowess, and speed. 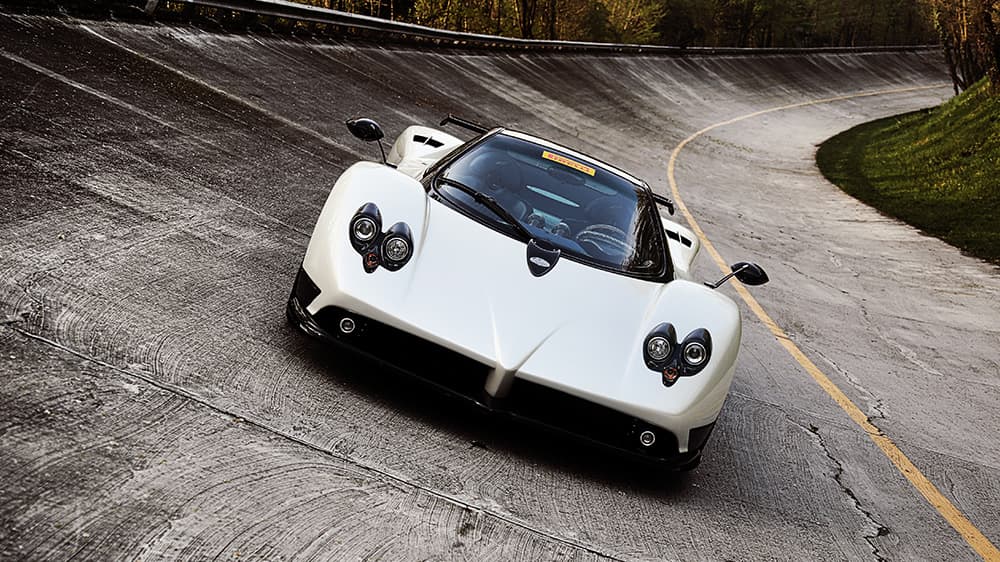 FROM THE ZONDA F TO THE ZONDA R
The Zonda C12 was the first, then came the Zonda F: carrying the name of Fangio brought it good luck, as during several tests with Pirelli at the Nurburgring it succeeded in conquering the circuit record, beating by 4 seconds the Porsche Carrera GT. A prize which was not being chased but which was achieved almost by accident, with Marc Basseng at the wheel, who had not even completed 10 circuits before stopping the clock ahead of every other supercar which up until that moment had pounded round the most famous 21 kilometres in the world. This was in 2007 and already Horacio Pagani was working on his next model, the Huayra, which embodied the technical solutions which were to be incorporated into the debut of the Zonda R. This Zonda variant was not type-approved for road traffic and was extreme in every respect: longer, wider, more powerful and more sophisticated than the Zonda F. Once again it appeared at the Nurburgring, this time with the declared intention of carrying home a new record time. The 6’47” time achieved by the very same Basseng also allowed Pagani Automobili with its Zonda R to carry off the trophy in the category of racing cars derived from production series vehicles, beating by 11 seconds the marvellous Ferrari 599XX.

PAGANI AND PIRELLI
The marriage with Pirelli – which today provides its P Zero tyres developed especially for each car which leaves the workshop of San Cesario sul Panaro – did not occur immediately but is one of those encounters which change the course of history, and has become a journey comprising common strategies and values between Pagani and Pirelli and which still continues today. A journey which, more than ten years after the first handshake, has brought together Horacio Pagani and Stefano Bizzi (Product Prestige R&D Pirelli) to tell the tale. In front of a specimen of the Zonda F, up there on the historical Monza Elevated Racetrack where, with the wind in his face, Juan Manuel Fangio pushed his Alfa Romeo up to its maximum speed, beating Ascari, in 1949.