For Car Enthusiasts, all roads lead to Monterey

For every enthusiast there has to be a dream destination: for golfers, the Masters; for tennis buffs, Wimbledon; and for car lovers, it’s Monterey Car Week.  The location, for starters is in itself, a “bucket-list” travel destination.  Known for sweeping natural beauty, stunning coastline, and world-class golf courses, Monterey County has plenty to offer before you begin to consider the stellar line-up of vehicles that crowd the area during world-famous Monterey Car Week. Even getting there is part of the fun. Highway one, stretching from San Francisco to San Diego along the California coastline, is regarded as one of the most scenic drives in the country – and for good reason. Huntington Beach, Los Angeles, Santa Barbara, Big Sur, and of course, Monterey and Carmel are all along the route. There is arguably not a better pleasure drive available in the country. And, if you plan your travel for August, you might be lucky enough to take part in the many festivities surrounding Monterey Car Week – where the best cars in the country converge in this small corner of California to create an automotive enthusiasts dream. 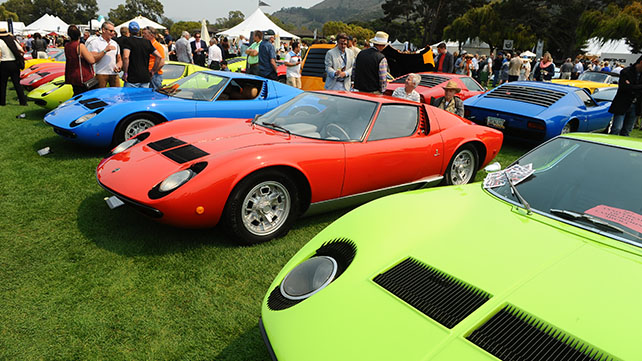 The story of Monterey Car Week, and how it became the premiere automotive gathering in the country, started in Pebble Beach in 1950. That was the year of the first Pebble Beach  Concours d’Elegance, held as an accompaniment to the Pebble Beach  Road race, which was won in that year by legendary Racing great Phil Hill, who went on to be a World Driver’s Champion.  After several decades of success and incredible growth, the event has expanded to include worldrenowned automobile auctions, a guest list that reads like a who’s who of the automotive industry and a charity aspect which has become a central theme to the entire event.

But, of course, the star of the show is the cars – and what an incredible array of cars there are! At Pebble Beach, the most spectacular and rare cars can be seen – and, if you are in the market, available to buy at one of the many auctions taking place during the event.  Pebble Beach  is where you can run into the world’s most serious car collectors.  And, If you are looking to pick up a Ferrari 250 GTO, the most expensive car in the world for which Pirelli developed unique Stelvio tires, or a 1963 Aston Martin DP 215, you are in the right place – just be sure to bring your check book. In 2017 auctions during Monterey Car week grossed a total of 300 million dollars.

Though the Pebble Beach Concours and the auctions seem to garner the most media attention, they are only highlights in a busy week full of activities for car aficionados.  In the week prior to the Concours all top manufacturers are represented in a host of events geared toward every type of car imaginable.  You can find the oldest, rarest models and also the newest concept cars at every turn.  If you have a favorite marque, time period or style of car, you can most likely find other aficionados also gathering to share their passion for the same.  For lovers of Italian automobiles, as an example, there is Concorso Italiano, constructed around the theme of topnotch Italian machinery. Here spectators can see the finest vintage and current Lamborghinis, Ferraris, Maseratis, Alfa Romeos, and Paganis including some very rare examples of the top marques.  Similarly, Legends of the Autobahn, hosted jointly by the BMW Car Club of America, the Mercedes-Benz Club of America and the Audi Club of America, brings together the finest German vehicles for an all-German marque Concours d’Elegance. Narrowing the focus even further, Werks Reunion, a Porsche specific gathering, brings together an impressive array of the finest Porsches spanning the entire history of the company in an impressive single marque display.

Pirelli plays a starring role in 2018 Monterey car week. The Italian firm sponsors ‘The Quail, A Motorsports Gathering’, which is one of the key events of the Californian car week, with more than 5000 visitors and 250 cars. Now celebrating its 16th anniversary, this event is synonymous with exclusivity. Starting from the venue: the Quail Lodge & Golf Club in Carmel, an oasis of green set against the backdrop of the imposing Santa Lucia mountains in California.

The brands present among the 250 acres of The Quail are just as impressive. Among them are Pagani, McLaren and Lamborghini – all of whom use Pirelli tires exclusively as original equipment – which have chosen The Quail as the venue to exhibit some of the most important models in their range.

So, in typical style, wherever supercars and great cars in general are - Pirelli is also present. And in Monterey, where the best of the best in the car world all meet, Pirelli has found the perfect fit.

Engineering: how to design
a tyre tread

Pirelli at the
Royal Highland Show 2016