Light-weight, powerful, high-tech. The name sums up a tradition of technology and sophistication that now reaches new levels

The name evokes the past but the car is projected to the future with technical solutions ready to break records and not only for speed. Of course, it will be exclusive, since only 399 examples will be made, and each one will set you back 1.7 million Euro. The Elva is the latest addition to the McLaren Ultimate Series and is named after the famous racing cars of the 1960s designed by Bruce McLaren, the founder of the automaker based in Woking. The name of the new sports car was not picked by chance. All Elva models were strongly characterised by the trademark pioneering approach to engineering shared by McLaren. The M1A, for example, weighed just 551 kilograms. It had a remarkably rigid chassis for its day and fitted an eight-cylinder 340 hp engine. The new Elva also makes lightweight construction its mantra. Its carbon-fibre chassis is one of the most structurally rigid of all the street-legal cars made in Woking and is powered by a 4.0-litre twin-turbocharged V8 capable of delivering 815 hp and 800 Nm. 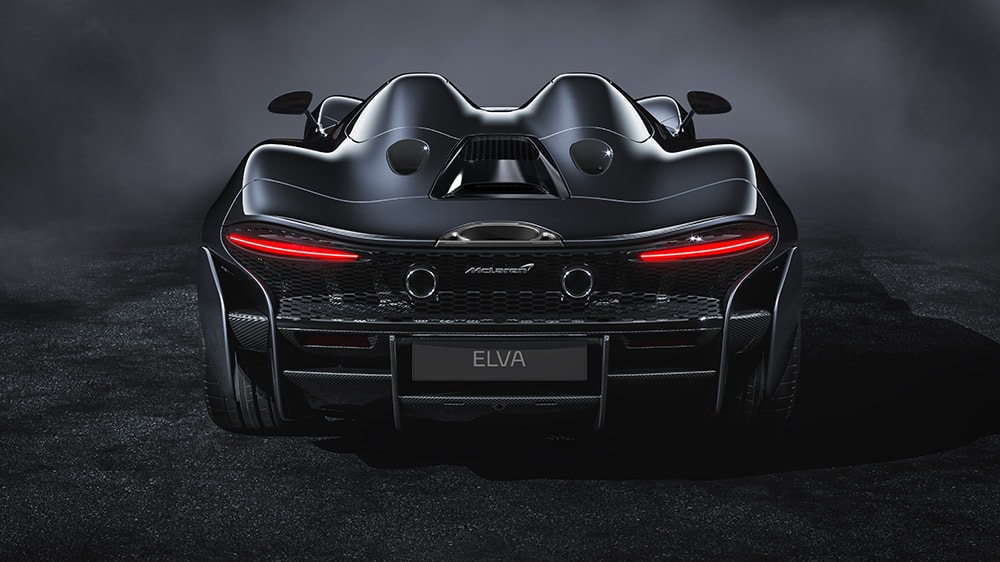 The evolution of the Senna

The V8 is an advanced version of the engine already seen on the Senna and uses a flat-plane crankshaft and a dry-sump lubrication system. Paired with a seven-speed automatic transmission with rear-wheel drive and launch control, the Elva can spring from 0 to 100 km/h in less than 3 seconds and touch 200 km/h in just 6.7 seconds, one-tenth faster than the Senna. Completing the mechanics of the new sports car are electro-hydraulic power steering, active suspension and sintered carbo-ceramic disc braking system. The brakes have undergone a special machining process to reduce their diameter to 390 millimetres with the effect of decreasing the unsprung weight.

Most of the body is made of carbon fibre, from the side panels (more than three metres long) to the 1.2-millimetre thick bonnet and the Active Air Management baffle. This system is designed to convey air over the cockpit at high speed, channelling it through a duct integrated in the front. The air is sent towards a baffle that, according to speed, can rise up to 150 millimetres to divert the flow over the cockpit and avoid the need for a helmet (for which a storage compartment is provided in the tonneau in all events). The system retracts automatically at slow speeds but the driver can deactivate it manually at the touch of a button.

McLaren’s famous MSO department has already developed exterior finish and interior trim ideas to meet the customers’ wishes. Exposed to the elements as they are, the seats can be finished with materials such as Ultrafabric or special water-repellent leather. The 8-inch infotainment system placed in the middle of the dashboard is also waterproof, as are all the steering wheel buttons, selectors and the optional yacht-inspired sound system. Speakers can be added at no extra cost and so can the vehicle lift system, five-spoke forged alloy rims and Pirelli P Zero Corsa tyres. However, be warned that you will have to pay for the 24-carat gold engine heat shield and the platinum or 18-carat white gold body badges.