It’s rare that you see so much wood in one place; but perhaps not when you happen to find yourself in an 18-acre woodyard in California

Home road Luftgekühlt: the coolest show on earth for any air-cooled Porsche

An unlikely place to hold a car show on a sunny Sunday in April perhaps, but when you put a well-known American racing driver together with a famously eclectic designer – both with a passion for the classic generation of air-cooled Porsches – more or less anything can happen. With wood as a leitmotif. 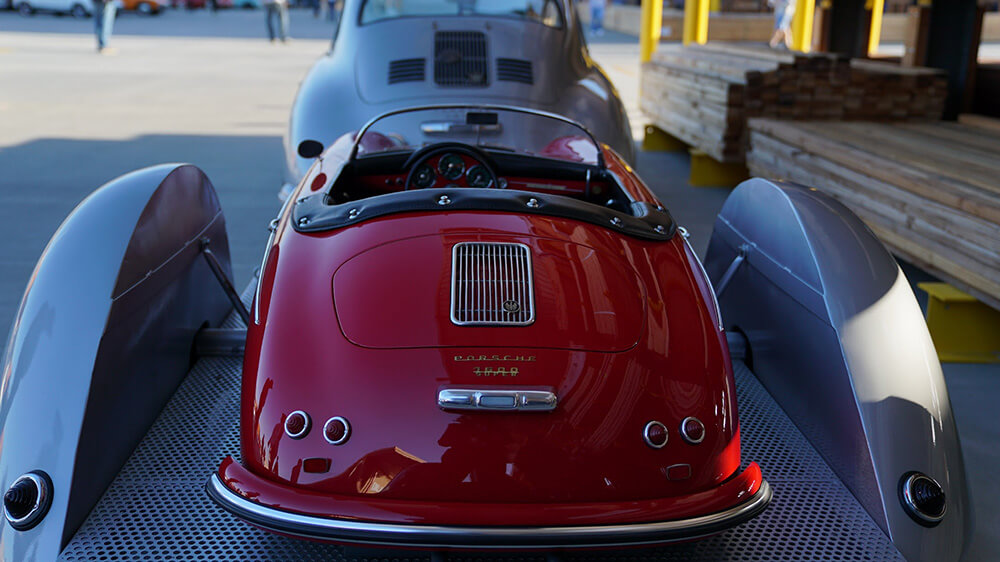 The people behind this charmingly idiosyncratic event are Le Mans racer (and Porsche factory driver) Patrick Long and designer (as well as multiple kart champion) Howie Idelson. Together, they’ve come up with a festival that no Porsche fan can really afford to miss.

The name of this gathering is of course typically Teutonic, meaning air-cooled in German. That basically takes in all the Porsches built up until the 993, which ceased production in 1998, putting to an end the air-cooled lineage that began in 1948 with the very first 356 built in Gmund, Austria.

Luftgekühlt is a typically American thing: an experiential car culture gathering centred around a number of historically significant or interesting cars, both for the road and the track. But what it isn’t is stuffy or traditional (despite the wooden overtones of the uniquely sylvan setting).

Patrick Long brings the cars and the mechanical passion; Howie Idelson is the master of creative ideas from his design studio in Pacific Palisades. Luftgekühlt has now become an annual event, but every year the venue changes – with the exact location disclosed only a few weeks before the start. The whole thing is redolent of an underground speakeasy house party, for those in the know: populated by exactly the sort of creative types you would expect to find at such a gathering. Air-cooled Porsches are a way of life rather than just a car choice.

Here are the locations the clan has visited in the past: the Deus Emporium in Venice, the production offices of Bandito Bros, the Modernica furniture factory and the Port of Los Angeles. What these places have in common is precisely nothing, apart from the fact that you wouldn’t anticipating discovering a load of air-cooled Porsches there. For the fifth running of this cult event, Luftgekühlt decided to visit California’s oldest woodyard: the Ganahl Lumber Company South Bay in Torrance. And there’s a reason for that.

“With Luftgekühlt 5 taking place at the Ganahl Lumber Company, we wanted to share a surprising aspect of Porsche’s story: the connection between lumber and the carmaker’s early history,” explains Idelson. “History buffs will know that the initial series of aluminium-bodied 356 models were constructed at an old sawmill in Gmund, Austria, and so we wanted to shed light on that story and give context to the recipe used for Luft 5.”

So, even the wood makes sense now. It was actually only in 1950 that production shifted to Germany, with Pirelli supplying Porsche right from the early days – and Porsche being one of the first companies to ask Pirelli to create bespoke tyres for the 911, in the 1980s. At the heart of the relationship between Pirelli and Porsche is passion: the element you find in common with all fans of the water-cooled cars, from all walks of life.

That’s one of the reasons why Pirelli was chosen as a partner for the Luftgekühlt event. Forming the backdrop to some of the most desirable Porsches on display at the event were sketches of the Pirelli Collezione tyres originally fitted to the air-cooled cars, courtesy of the Pirelli Fondazione. The Collezione family of tyres combines classic looks with modern technology, catering for some of the world’s most desirable cars made between 1950 and 1980 to help these vehicles maintain perfect originality. Thanks to the use of the latest compounds, tyres from the Pirelli Collezione range offer better grip and improved road holding on wet surfaces, guaranteeing high levels of safety and reliability without compromising on period style.

And style is what Luftgekühlt (abbreviated simply to ‘Luft’ by cognoscenti) is all about. Some rarities on display included the Porsche 908K (standing for kurzheck, or ‘short tail’) which was the first ‘Plastic Porsche’ engineered to the maximum engine capacity for sports cars of the time: 3.0 litres. This particular chassis was raced by Vic Elford and Jochen Neerpasch at the 1000kms of Spa-Francorchamps: a race that ended when Neerpasch crashed into a telegraph pole, thankfully without any major consequences. Another rarity on display was one of the original 911R prototypes, which spawned the 911 family. The historical significance of it can’t be underestimated.

“The few original examples of this car are in museums or hidden away in private collections: public exposure is a rarity,” said one of the event organisers, almost reverentially. “This edition of Luft has one of the rarest of the rare, one of the four original prototypes, known internally as R4. Of the four prototypes, R4 is the only one to have survived virtually intact as originally constructed. Chassis R1 was heavily raced and modified to the point of being unrecognisable, R2 was in a road accident, disassembled and has been in storage since 1980. R3 was raced, sold, crashed and later rebuilt. The body panels of R4 are original and have not had any modifications, which is something you never see among most 911Rs”.

With stuff like that to see and marvel at, no wonder Luftgekühlt is so cool. Air cool, in fact.