Now comes the Lotus Evija: an all-electric hypercar that is the first one for the British brand

Lotus is among the most evocative names in motoring. Its reputation was forged on the racetracks of the world, where founder Colin Chapman was responsible for some of the most famous and innovative car designs in Formula 1. Team Lotus was a dominant force in F1 throughout the 1960s and 1970s, winning seven constructors’ titles and six drivers’ crowns with the likes of Jim Clark, Emerson Fittipaldi and Mario Andretti.

At the same time, Chapman developed a successful line of road-going sports cars, underpinned by the same qualities of efficiency and lightweight that served the racing team so well. Popular Lotus creations over the years have included the Seven, the Elan and the Elise.

Now comes the Lotus Evija: an all-electric hypercar that is the first new Lotus since the brand became part of Geely, the world’s fastest-growing automotive group. As such, it marks the beginning of an exciting new chapter for the company, with the Evija set to inspire a range of new Lotus performance models over the coming years. 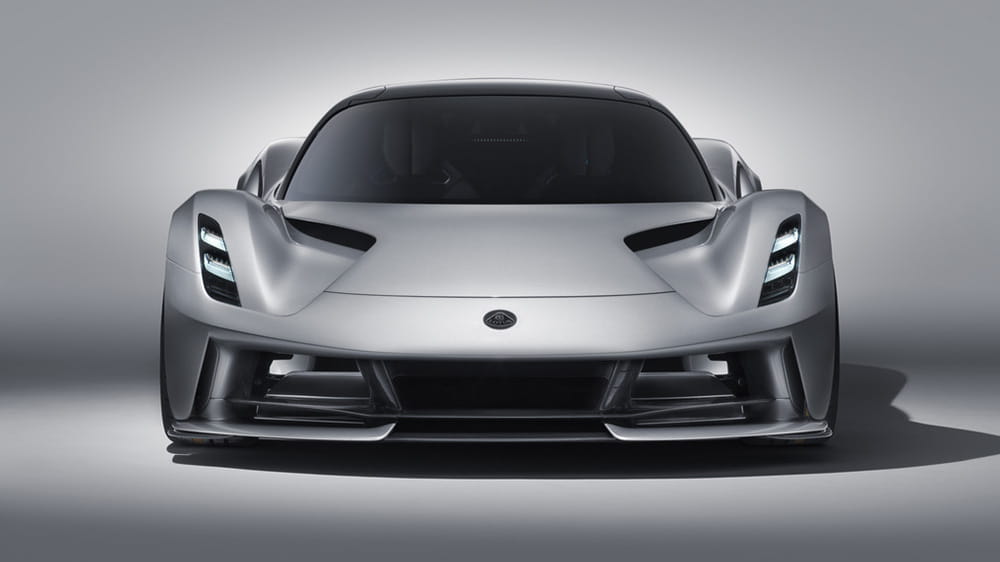 What’s in a name

Evija means ‘the first in existence’, which is appropriate for a car that breaks as much new ground as this one does. Not only is it the first Lotus hypercar, but it’s also the first fully electric British hypercar and the first electrified Lotus. Production is set to begin at the company’s renowned facility in Hethel, Norfolk in 2020.

The Evija is the most powerful production road car ever, with a target power output of 2,000 PS, or 1,973 bhp. Its all-electric powertrain has been developed in partnership with Williams Advanced Engineering, using experience not only from F1 but also from supplying Formula E. The battery pack is mounted in the middle of the car, immediately behind the two seats, and supplies power to four electric motors. With one at each corner, it makes this the first four-wheel drive Lotus production road car.

True to the Lotus ethos

The Evija is a radical departure from anything Lotus has made before, but that doesn’t mean that it’s abandoned Chapman’s core principle of “simplify, then add lightness”. The technology in the Evija is certainly complex, but it is still lightweight for the hypercar segment.

It’s the first Lotus road car to feature a one-piece carbon fibre monocoque chassis, manufactured the same way as in F1. The powertrain layout is the lightest and most energy dense electric power package ever fitted to a road car. Its target weight of 1,680kg would make it the lightest fully electric hypercar to go into production.

The innovation in the Evija isn’t only underneath its skin. Designers have studied how Le Mans race cars channel airflow through the car, with a Venturi tunnels through each rear quarter helping to provide downforce as well as a striking visual presence – something that would satisfy Chapman’s desire that every component should serve multiple purposes. More motorsport inspiration comes in the form of active aerodynamics, with a rear spoiler and an F1-style Drag Reduction System (DRS). Pirelli P Zero Trofeo R tyres also help to put that record-breaking power down on the road.

The most sophisticated Lotus ever made is also set to be one of its most exclusive road cars, with production limited to just 130 examples – in line with the Evija’s Lotus ‘Type’ number 130. But it looks set to herald the beginning of an exciting new era for this classic British sports car brand.