It is a dream (come true) for very few: not because of an impossible price tag, but because of the choice made within the Lamborghini stable. The new Sián Roadster will see only 19 units built, all of which are already reserved. This is a success for the open-top version of the hypercar presented in September 2019 and which brings together a souped-up style and a refined hybrid system. The bodywork boasts beautifully sculpted lines, with elements which strike you immediately: the Y-shaped daytime lights, the enormous air intake vents in the sides and at the rear, where the twin elevated exhausts make a fine display, the hexagonal rear lights (which are inspired by those of the Countach from 1974) and the rear spoiler, which is able to rise or fall automatically depending on the car’s speed.

Discover Pirelli tyres made for Lamborghini 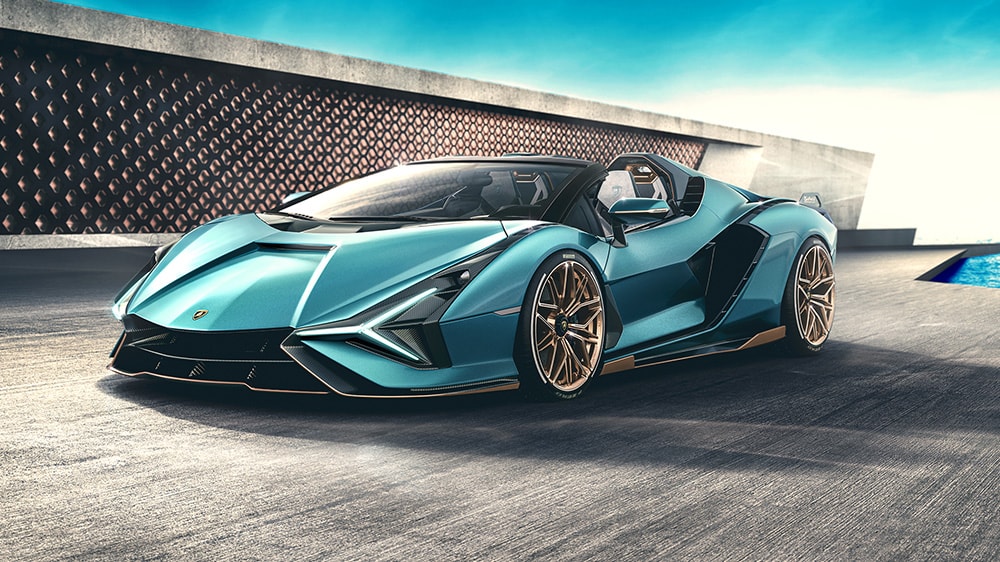 Powering the Sián Roadster is a derivation of the naturally-aspirated V12 engine which is fitted to the Aventador SVJ, with its intake valves in titanium and capable of developing 785 HP at 8,500 rpm. This is combined with a 48-Volt electric motor, which develops 34 HP, incorporated into the gearbox mechanism and connected directly to the axles (the Sián has four-wheel drive), in order to guarantee an immediate response and improved performance levels. The system also ensures a smoother ride during gear changes, by cancelling any “jerks” in the transmission, and generates traction in the wheels during low-speed manoeuvres or in reverse. Overall, the Sián Roadster hybrid develops 819HP and offers a performance in line with competition race cars, because it can achieve a maximum speed in excess of 350 km/h and sprints from 0 to 100 km/h in 2.9 seconds.

The Lamborghini technicians have come up with some innovative technical solutions. Such as the one for the electric motor, which is not powered by lithium ion batteries, like the majority of hybrid systems, but by a ‘supercapacitor’, positioned between the cockpit and the V12 engine: it is three times more powerful than a battery of the same weight and three times lighter than one of equal power, so together with the electric motor it weighs no more than 34kg. The supercapacitor also re-charges itself in a shorter time compared with batteries: according to Lamborghini, a single braking action can bring it back up to a 100% charge. Even more unusual are the innovations linked to the cooling system. At the rear of the car, the Sián features active cooling winglets – using a technology patented by Lamborghini – which are activated by springs, built out of a “shape memory” material. As the temperature inside the engine compartment rises, these actuators extend so as to determine the movement of the winglets, and then return to their original dimensions when the compartment cools down.

For the launch, the famous Ad Personam department of the House of Sant’Agata has chosen the new Uranus Blue colour combined with Electrum Gold, this latter reserved for the alloy wheels which have been fitted with P Zero Corsa racing tyres: 225/30 ZR20 92Y at the front, 355/25 ZR21 107Y at the rear. Electrum Gold is also the chosen theme for the interior finishes: this is the symbolic colour for the electrification of “raging bull” models, which we shall re-discover on other special series in the future. The cockpit – which is identical to the “normal” Sián, with its combination of top-end aesthetics and materials – also showcases items printed in 3D, which can be made to the customers’ own specific sample, for example by engraving the initials of their own name on them. Curious facts: Sián, in the dialect from around Bologna, means bolt of lightning. There you are.