“Heritage”, “Extreme”, “Sport”: these are just a few of the applications of the numerous P Zero tyres which, since 1987, have transformed a product into an iconic brand

Home road Just like in a football team: each Zero has its part to play 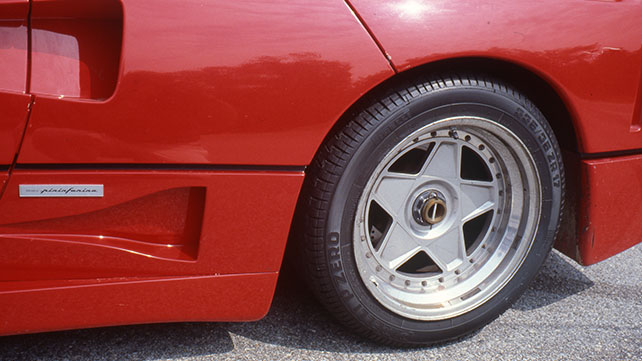 The “goalkeepers”: System and Rosso
We take our lead from the two “goalkeepers”: the P Zero System and the P Zero Rosso, the final barrier or, if you prefer, a possible solution for nostalgic car drivers, those who may own cars which have marked the history of the automobile industry, from the Ferrari F40 (the first vehicle to be fitted with a P Zero) to the Lamborghini Countach.
These represent the “heritage” P Zero application and are available in selected dimensions, primarily to fit cars from the 90s or 2000s.

The “defender”: Nero GT
In the role of defender, on the other hand, we find the P Zero Nero GT. This unique product from the P Zero family created exclusively for refits, the Nero Gt “defends” those drivers who are particularly sensitive to the concept of “value for money” but who nevertheless wish to enjoy the advantages and performances of the P Zero technology. Conceived for sports cars and medium-sized saloons, the Nero GT demonstrates its strong points in its ability to cover a long mileage and its excellent handling in both wet and dry conditions.

All Season: the American cousin, the “Quarterback”
Just as European soccer is matched by its American equivalent, “football”, the P Zero too has its Stars and Stripes version: the P Zero All Season. Continuing in the metaphor of footballing roles, the All Season is, without doubt, the “Quarterback” of the family, the one who plays in attack and decides on the action of a game. The American cousin of the P Zero is destined, in fact, for UHP vehicles, whose tyre dimensions range from 17 to 22 inches.

The P Zero always plays in attack
The bomber, the epithet for an attacker, remains, undisputedly, the P Zero. After the first model designed in 1986, and the later version in 2007, this year sees the arrival of the latest version of what can be considered the champion of the Pirelli sports range. Having been selected as the equipment of choice for the most sporting and powerful cars on the market, the P Zero is now delivered in three models destined for various vehicles: the first adapted for extremely high-performance sports cars, the second for premium saloons with very high levels of performance and finally the new P Zero Corsa for supercars. Between the first two the difference is evident from the design of the tread, where the first has a lower number of outcrops in order to provide an improved dynamic performance, and the second, which instead displays an outer shoulder which includes more grooves in order to ensure a good level of comfort. The P Zero Corsa takes to their extremes all the performances of the P Zero family, thereby taking on the role of “bomber”. Created, not at random, but as part of the original equipment for supercars with the highest possible levels of performance, the P Zero Corsa can be used equally on roads or race tracks.

F1® and Trofeo: the sporting soul of the P Zero
From football pitches to competition circuits. The sports version of the P Zero does not lend itself to footballing comparisons. The only world here is that of the race track. And what a track. Indeed, the P Zero family also includes all the dry-weather tyres, with slick treads, which Pirelli produces for the layouts of the top car racing series: the Orange hard, the White medium, the Yellow soft, the Red supersoft and the very latest Purple Ultrasoft.

Although the P Zero tyres for Formula One cars are not allowed outside the circuits of the World competition, unless they have been removed and are carried aboard lorries, the P Zero Trofeo, which are designed for driving on circuits where the asphalt is dry, is also approved for use on roads, thus allowing drivers to transfer their vehicles to the different circuits.

Thus the Pirelli “team” is complete. And the first match, to obtain type approvals, has already been won. There are over 800 of them which have been secured by all the P Zero models!