What do a watch, 190 studs, and skiing all have in common? Read on to find out…

Stud farm
The mind-blowingly crazy thing about travelling in Scandinavia – or anywhere with extremes of winter weather – is that you can drive for hundreds of kilometres without a problem, then step out of your car and fall flat on your face.
And that’s all down to studded tyres and the impression of seemingly unassailable grip that they offer you. Grip that’s not present in your average pair of loafers, which is evident the minute that you step outside onto some ice and feel the inevitable effects of gravity.
Ice, by nature, offers very little friction and therefore no grip. So, studded tyres work by biting into the ice and gaining traction on the firmer surface below, a bit like an anchor. But the studs by themselves don’t provide the whole amount of adhesion, as the right (soft) compound is still needed to generate grip and also the most effective tread pattern to disperse loose snow, ice and dirt as quickly as possible. 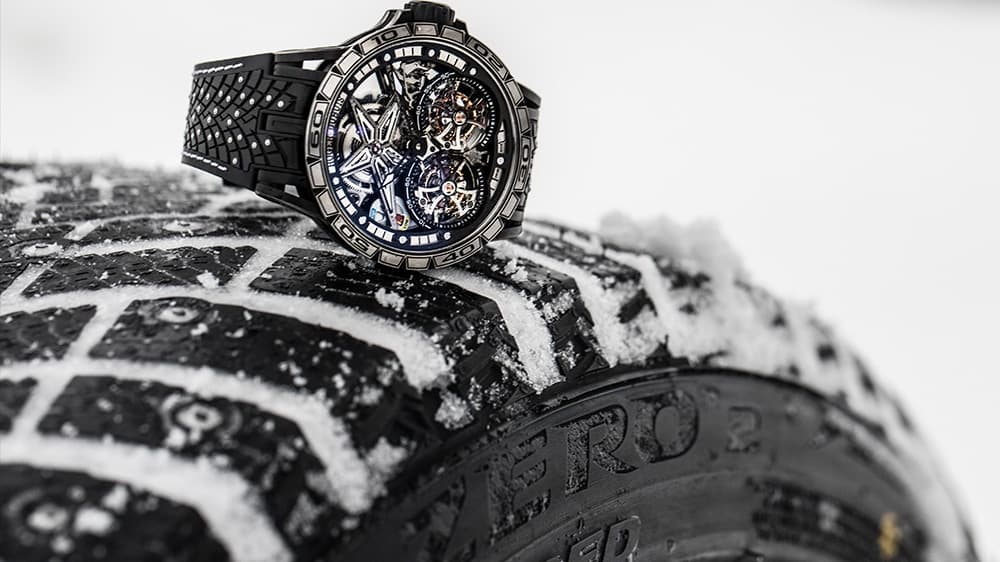 Play it again
Pirelli revolutionised the world of studded tyres with the original Ice Zero tyre, which used technology derived not only from extensive winter testing programmes but also from motorsport, where Pirelli’s studded competition tyres have won the snowy Rally Sweden in the past. Now the latest evolution of this famous tyre has been launched: the Ice Zero 2. There’s more grip as the number of studs increases from 130 to 190, and they are also arranged in a unique pattern that minimises road noise yet improves braking distances. The tread pattern has been redesigned, and this means that there are 24 different channels through which snow and ice can be dispersed; again benefitting grip. The actual technology that puts the aluminium studs in the tyres at the factory has changed too, ensuring that they will always stay in place. Pirelli is famous for the longevity of its winter tyres, and that aspect certainly hasn’t changed. Most other things have, making the Ice Zero 2 the best choice for top of the range cars, providing both performance and comfort. However bad the conditions.

Swede success
The new Ice Zero 2 tyre was launched at Pirelli’s proving ground in Flurheden, Sweden. It’s a remarkable place, with more than 20 kilometres of icy and snowy roads available to put winter tyres through their paces. Here, more than 100 days of testing are possible each year, taking in more than 25,000 kilometres and over 30,000 tyres. The conditions that winter tyres are expected to perform in are often so extreme that they can’t be effectively replicated, making real life testing vitally important.
The choice of Sweden as a launch venue was no coincidence, as it’s where the world skiing championships are currently being hosted, sponsored by Pirelli. Skiing is all about control on ice and snow, so the parallels are obvious.
There’s also another interesting spin-off from the Ice Zero 2 tyre. As part of the exclusive watch collection developed jointly by Roger Dubuis and Pirelli Design, the new Excalibur Pirelli Ice Zero 2 timepiece features a strap decorated with exactly the same stud pattern as the latest tyres. The strap itself consists of rubber made from the actual Pirelli rubber that has taken part in the highest levels of motorsport. So the Excalibur Pirelli Ice Zero 2 is quite literally the coolest watch out there.