The power and lightness of air leads the driving experience in this new hypercar, named after the Andean Father of Wind and dedicated – through the initials BC – to the late car collector and Pagani owner Benny Caiola

Horacio Pagani wanted his clients to drive with the breeze in their hair and, not content with taking the roof off what was already one of the most beautiful hypercars in the world – the Huayra BC – he created the Huayra Roadster BC. It’s a brand-new car that, once again, betters the levels of technical and aesthetic perfection continuously redefined by the automotive artist in his workshop in San Cesario sul Panaro, near Bologna in northern Italy.

The Huayra Roadster BC is a car with a double personality: designed to deliver the best in the hands of an experienced driver, it is also comfortable and user-friendly for pleasurable driving on the road. The car boasts a dry weight of 1250kg, thanks to the use of Carbo-Triax HP62 and Carbo-Titanium HP62 G2, innovative materials developed to increase the stiffness of the monocoque chassis, offer a better dynamic response and provide more safety in critical conditions.

It is safety first for Pagani. While the silhouette is one of sophisticated beauty, defined by a style that satisfies aesthetic requirements, it also ensures downforce in all driving conditions for better stability. Active aerodynamics, introduced in the hypercar world for the first time on the Huayra Coupé, are paired with active suspension to give extra stability to the car and adapt the aerodynamic set-up to the driver’s needs. 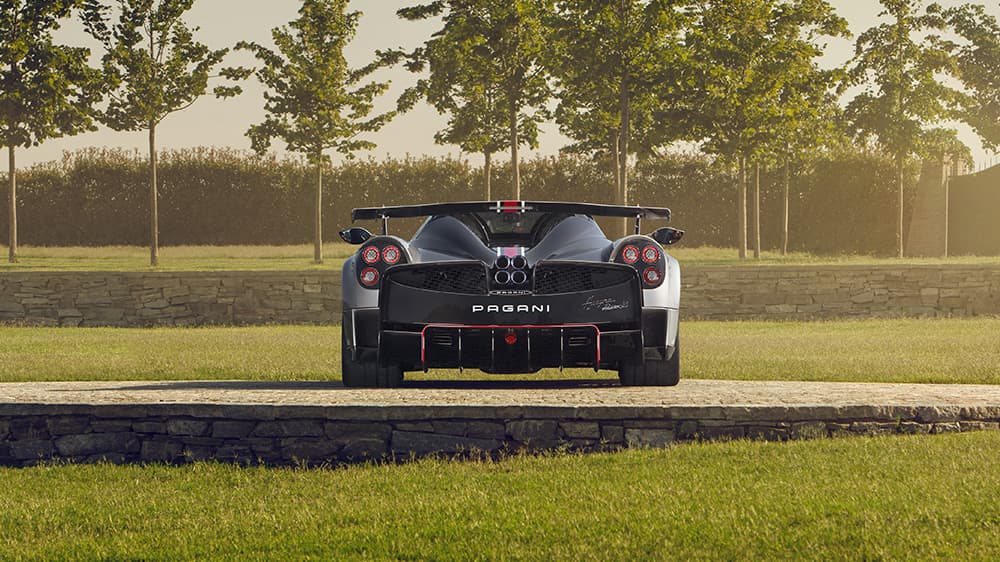 An electrifying feeling of power

The racing personality that accompanies excellence in performance is enhanced by the new titanium six exhaust-pipe system, with two pipes directed by catalysers to exploit the benefits of a blown diffuser and generate further downforce. The bewitching roar of the exhaust system befits that of the 12-cylinder engine, born of some 25 years of collaboration with Mercedes-AMG. The Pagani V12 has bettered itself. The Huayra Roadster BC generates over 800hp and 1,050Nm of torque from 2000rpm, offering an electrifying feeling of power but also one of flexibility and safety to the driver.

One of the most advanced engines around, featuring innovative elements such as new turbines, a revolutionary hydroformed intake manifold, double throttle bodies and four water-air intercoolers, it even complies with the world’s latest anti-pollution regulations. Greater safety is also provided by the seven-speed mid-car sequential transmission, which is lighter and capable of reducing polar inertia to decisively contain oversteering.

“As if your hands were placed on the road”

Horacio Pagani’s creative flair never rests – and feeds on new challenges. For the past 10 years, that quest has been shared by Pirelli. The company’s bespoke P Zero Trofeo R tyres were designed to excel together with the Huayra Roadster BC.

The partnership started with the virtual development of the tyre and continued with ongoing improvements and mutual adaptations between tyres and car. The result is a tyre that conveys a feeling of total control: “as if your hands were placed on the road,” says Pagani, who was particularly keen to offer his customers a user-friendly car for intuitive driving. “The knowledge and skill of Pirelli’s engineers made this tyre truly communicative, able to warn you when you’re reaching the limit of grip,” he adds. The Trofeo R tyres offer pinpoint cornering accuracy and outstanding grip, paired with a tread pattern designed to guarantee quieter running and lower rolling resistance for performance that is also fuel-efficient.

A work of art

Total dedication: this is what you feel when you sit in the finely embossed leather seats of the Huayra Roadster BC. Observing and seeking every small, precious detail is a unique experience in itself – even before you start the engine. The cockpit is a work of art, full of premium elements and accessories, like the nine-channel audio system. But once you have fastened your four-point racing-style seat belt, it is impossible to resist. The Pagani V12 wants to make its voice heard and you cannot but comply.

Pagani Zonda, for over 20 years the hypercar of dreams