The 'golf cart culture' is not just a fashion, but a silent movement changing the transport over short distances and even urban planning! 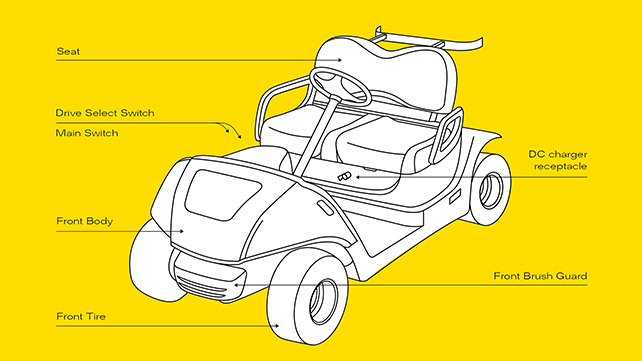 Easy to drive, small and cost-effective: golf carts are becoming an alternative to using cars in some communities. In the Southern states of the U.S. the golf cart culture is becoming so popular that it is changing the way people thinks of short-distance transport, to the point that the architecture of urban spaces is changing too, in order to accommodate them.

Once upon a time, golf carts were only used to move around on a golf green, or to navigate resorts. These days, golf carts, or NEV (Neighborhood Electric Vehicles) are a frequent choice for the 60+ population, who are already making ways – rather literally – with their personalised models and original designs. From Atlanta to Texas and Palm Springs, we’re seeing carts everywhere: their riders are often retired ladies and gentlemen, who look a lot more at ease using them than a “real” car. According to CityLab, a urban studies website, over 50.000 golf carts populate The Village, one of Florida’s biggest age-restricted communities. Since a third of all transport happens by golf cart there, 90 miles of new tracks have now been built to accommodate them. Urban planning is adapting to welcome the golf cart, with newly planned roads, squares and bridges, half crazy golf, half futuristic city.

Researchers at the MIT are developing a new, low-cost, driverless golf cart

According to the National Geographic, new versions of golf carts are already being tested: they are driverless and could constitute a real alternative for public transport on a large scale. Following the experiments ran by Google in mapping roads and territories via driverless drones, researchers at the MIT are developing a new, low-cost, driverless golf cart. They already count a few successes: the public gardens of Singapore, in October last year and the campus of the University of Santa Clara, California.

The Santa Clara robot was developed by Auro Robotics, and will soon be introduced in more university campuses and residences for the elderly. Uber Technologies is also at work on driverless cars. According to Nalin Gupta, CEO of Auro Robotics, it is easier to design a driverless golf cart than it is a driverless car, because the carts are slower vehicles, able to detect variations in the road texture or obstacles, reacting in a safer way. So far, they’ll only be employed in private or restricted contexts – also given their short battery life. The new model developed by MIT could make the difference cost-wise; it’s already fully equipped to be able to ‘read the road’ better than any driver. Proof comes from the test run in the Singapore gardens, a joint experiment by Singapore-MIT Alliance for Research and Technology. It transported nearly 50 people with not a single incident. On the other hand, Google Cars have crashed 16 times – according to Mountain View, due to human error.

The Tyre with a Mechanic Inside

Human Technology: can you build a tyre?