Three years after first presenting the concept of its hybrid hypercar, the fledgling Italian carmaker Frangivento has unveiled a prototype

Home road The “impossible” car,
made in Turin

The challenge of developing a hybrid plug-in hypercar is revealed in the name of carmaker Frangivento’s recently unveiled prototype.

The challenge of developing a hybrid plug-in hypercar is revealed in the name of carmaker Frangivento’s recently unveiled prototype.

It is called “Asfanè”, loosely translated from the dialect of the Piedmont region of northern Italy where the carmaker is based as “no can do” or – more directly – “impossible”.

Add to that the second part of its name – “Dieci Dieci” in Italian or "Ten Ten” in English – and you will get a feel for what has been achieved because, against all odds, the Asfanè DieciDieci was made and it packs a 1010hp engine.

Along with its thought-provoking name, Frangivento's debut hypercar has a powerful appearance and temperament to match. In the words of its designer, it is a “high-performance, eco-sustainable, all-Italian dream come true”.

The car is the brainchild of Italian entrepreneur Paolo Mancini and designer Giorgio Pirolo, who signed up master craftsmen in Moncalieri near Turin to make the car by hand and won the support of a network of Italian companies of excellence who believed in the project – including Pirelli. 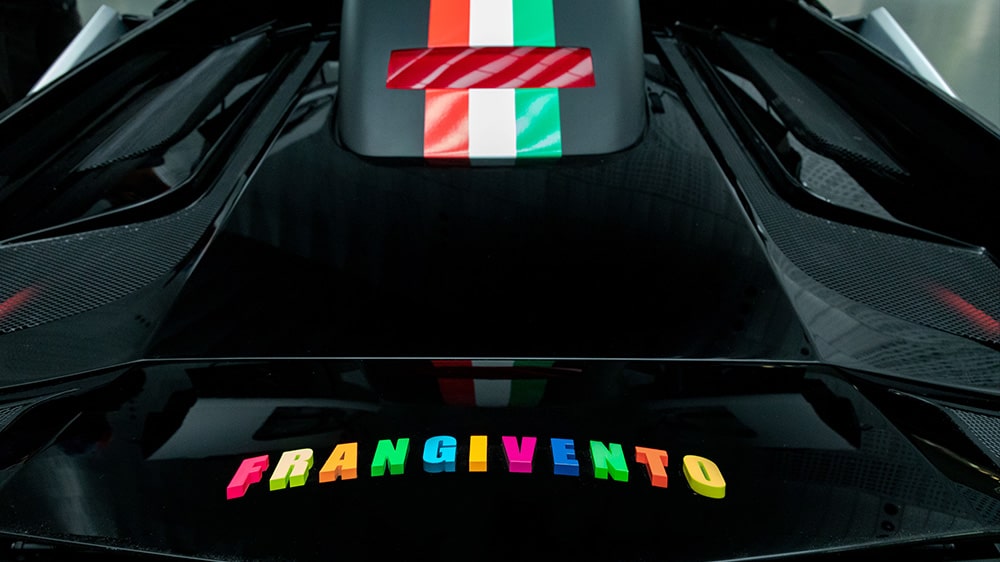 High-performance
The total power of 1010hp of the all-wheel-drive car is unleashed by a V10 turbocharged petrol engine at the rear and two electric motors located on the front axle. The creators set about reducing the weight of the car and boosting fuel-efficiency by using premium lightweight materials. The bodywork is made of carbon-fibre parts manufactured in a workshop in the Langhe area of Piedmont and satin-finish, beaten aluminium sheets that benefit from the long-established skills of Piedmontese craftsmen.

The car has many aerodynamic features – apt for a company whose name Frangivento means “windbreak” in Italian. The car’s profile is a single wedge-shaped line, sweeping from the rear wheel arch along the entire vehicle up to the trimaran-influenced nose, unmistakably inspired by Formula E racing cars. There are also active aerodynamics, meaning that some of the body parts, such as the retractable headlights, move.

The car’s profile is a single wedge-shaped line, sweeping from the rear wheel arch along the entire vehicle up to the trimaran-influenced nose

The “wow” factor
The prototype was unveiled at the National Automobile Museum in Turin – known as Mauto – on 30 May and was presented at the Italian Embassy in Monte Carlo during Italy's Republic Day on 2 June. Its interior has been completely redesigned since the concept car was revealed at the 2016 Turin Motor Show and you will find stylistic choices inside the cabin that are even more outrageous than those on the outside.

To open the gullwing doors, just squeeze the trigger of one of two gilded guns – a tribute to the starting pistol of the legendary 24 Hours of Le Mans endurance race. Meanwhile the gear stick, complete with miniature Asfanè, is a small sculpture in the round.

To open the gullwing doors, just squeeze the trigger of one of two gilded guns – a tribute to the starting pistol of the legendary 24 Hours of Le Mans

Compared with the customary practicality of sports cars, comfort and ergonomics have been favoured here with the goal of creating a cabin with all the hand-stitched and upholstered ease of a luxury “lounge”, designed to match the tastes of each customer. And it appears to be working – while the car’s performance rating has still to be disclosed, it’s said that the prototype Asfanè DieciDieci has already found a buyer.

Vendôme 80, line-up of turbocharged cars from the Eighties